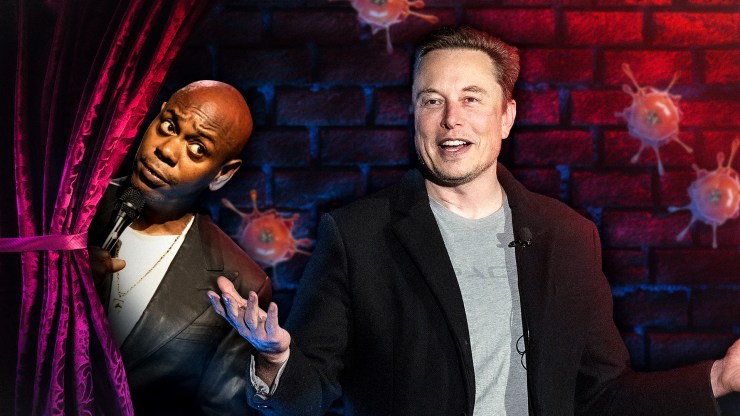 For his part, the tech mogul said that most of the crowd was actually cheering on his appearance.

A crowd of people erupted in boos in San Francisco on Sunday night after comedian Dave Chappelle brought billionaire Elon Musk on stage during a stand-up set.

“Ladies and gentlemen, make some noise for the richest man in the world,” Chappelle said as he welcomed Musk, the CEO of Tesla, SpaceX, and now Twitter to the Chase Center.

While his presence was initially met with a mix of cheers and boos, based on video footage of the incident, the booing overpowered the applause the longer Musk was on stage.

“Cheers and boos, I see,” Chappelle quipped, later joking that it sounded like the Twitter staffers Musk “fired are in the audience.”

“All those people who are booing, and I’m just pointing out the obvious, they all have terrible seats,” Chappelle later said. “All coming from way up there.”

For several minutes, Chappelle tried to quell the crowd with jokes. The laughs he elicited were quickly followed by continuing boos. Musk attempted to interject at various points, but Chappelle was largely left to his own devices to regain control of the arena.

“Dave, what should I say?” the tech mogul asked at one point.

Chappelle told him to not say anything, as it would “only spoil the moment.” He later referred to the booing as “the sound of pending civil unrest.”

Later in the stunt, however, Chappelle told the crowd to “shut the fuck up with your boos.”

“Booing is not the best thing you can do,” he said.

One Twitter user who said he was at the show claimed 80% of the stadium booed. On Monday morning, Musk countered the narrative that the audience rejected his presence by tweeting that “technically, it was 90% cheers & 10% boos.”

“But, still, that’s a lot of boos, which is a first for me in real life (frequent on Twitter),” he wrote. “It’s almost as if I’ve offended SF’s unhinged leftists … but nahhh.”

Videos of the incident have been circulating on Twitter since Sunday night. The Twitter user who first uploaded the video, however, has either been suspended from the platform or took down their account.

Because of this, some accused Musk of trying to suppress the video and prevent it from trending. By Monday morning, though, there was no shortage of tweets containing videos from the show and Chappelle was the number one trending topic on Twitter in the United States.

Both Chappelle and Musk have faced no shortage of criticism for the event. Many have argued that it was “pathetic” for Chappelle to ask the crowd not to boo, suggesting it shows “how detached from reality he must be.”

Others thought it was telling that even the crowd at a Chappelle show would boo Musk, as the comedian has become increasingly known for his anti-woke commentary.

Musk has constantly slammed the left and other “woke” groups. Most recently, he faced backlash on Sunday for saying his pronouns were “prosecute/Fauci,” playing into both transphobic jokes about stating pronouns and misinformation that has spread about Dr. Anthony Fauci and the COVID-19 pandemic.

See what others are saying: (Rolling Stone) (CNBC) (Gizmodo)

“Westworld” and More Are Set to be Yanked From HBO Max