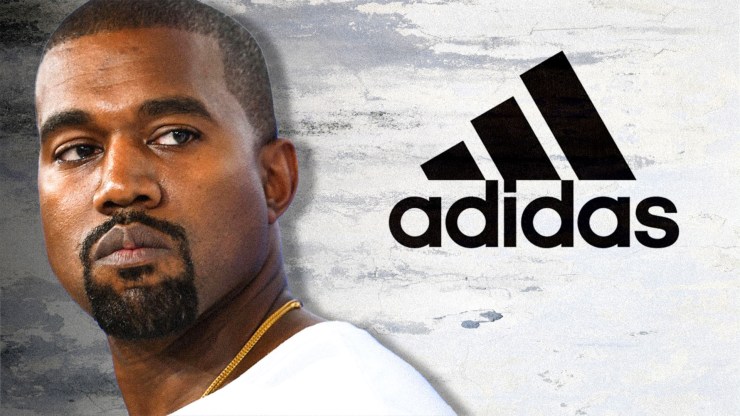 Over the weekend, a hate group hung a banner saying “Kanye is right about the Jews” above the heavily trafficked 405 freeway.

Sportswear company Adidas is facing pressure to drop Kanye West after the artist’s antisemitic comments prompted a series of anti-Jewish incidents in Los Angeles over the weekend.

Over the past several weeks, West, who also goes by Ye, has spread several antisemitic conspiracy theories and tweeted that he would go “death con 3” on Jewish people. He was soon locked out of Instagram and Twitter and brands like Balenciaga dropped their partnerships with West.

Adidas said it was reviewing its Yeezy partnership with West after he showcased “White Lives Matter” shirts during his Paris Fashion Week show, but many consumers are threatening to boycott the company until it fully drops West in light of his antisemitism.

The Anti-Defamation League started a campaign titled “Tell Adidas to Run Away from Antisemitism” to encourage people to contact Adidas about this issue.

“Adidas allowing Kanye to continue to spew hateful rhetoric without consequence sets a dangerous precedent of giving social influencers a pass for being antisemitic. Businesses must act to protect against the spread of hate,” The ADL said in a statement online. “Please join ADL in contacting Adidas and demanding they condemn Kanye’s antisemitism and re-evaluate their partnership.”

On Twitter, people are using the hashtag #BoycottAdidas to express their frustrations with the company. Many are sharing a clip from West’s appearance on the “Drink Champs” podcast earlier this month where he suggested he is too powerful to be dropped by the clothing company.

Anger at the athletic brand increased over the weekend as West’s outbursts inspired a slew of antisemitic hate in Los Angeles. On Saturday, a hate group hung a banner over the 405 freeway saying “Kanye is right about the Jews.” The group also did a Nazi salute while holding the banner.

Los Angeles mayoral candidate Karen Bass encouraged Adidas to drop West over the antisemitism he has spread throughout the city.

“We must all condemn the hate spewed by Kanye West, which has real consequences that we saw in Los Angeles this weekend,” Bass tweeted. “Until they sever ties, Adidas is enabling and financing his hate — they must act now.”

By Monday, talent agency CAA dropped West from their roster and MRC announced it will not be releasing an already-completed documentary that the studio made about West. His ex-wife, reality star and entrepreneur Kim Kardashian, also tweeted a condemnation of the recent surge in antisemitic rhetoric.

“Hate speech is never OK or excusable,” she said on Twitter, though she did not specifically name West. “I stand together with the Jewish community and call on the terrible violence and hateful rhetoric towards them to come to an immediate end.”

See what others are saying: (The Los Angeles Times) (The Wrap) (Forbes)