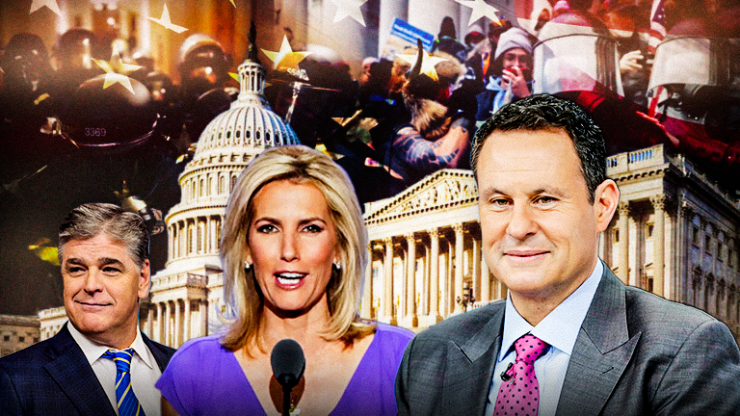 The texts sharply contradict comments the anchors made on their shows the night of the insurrection attempting to downplay the events.

Three top Fox News hosts texted former White House Chief of Staff Mark Meadows on Jan. 6 urging him to get then-President Donald Trump to make a public statement and stop the rioters attacking the U.S. Capitol, according to correspondences published Monday by the House committee investigating the insurrection.

The messages were made public shortly before members of the committee voted 9-0 to recommend that Meadows be charged with contempt of Congress for his renewed refusal to cooperate with their inquiry.

Meadows had given the panel the records as part of a collection of more than 9,000 documents he handed over before he stopped cooperating.

The texts, read aloud by Rep. Liz Cheney (R-Wy.), included messages from primetime stars Laura Ingraham and Sean Hannity, as well as “Fox and Friends” co-host Brian Kilmeade. The dispatches reveal a startling level of concern from the hosts, who have been among the former president’s most ardent public champions.

“Mark, the president needs to tell people in the Capitol to go home,” Ingraham wrote. “This is hurting all of us. He is destroying his legacy.”

Kilmeade echoed that sentiment, texting Meadows: “Please, get him on TV. Destroying everything you have accomplished.”

Hannity also urged the former chief of staff to encourage Trump to address the public.

“Can he make a statement?” he said. “Ask people to leave the Capitol.”

The newly revealed concerns from the anchors stand in stark contrast to remarks they spread to their millions of viewers following the insurrection, as well as their continued efforts to downplay the attack ever since.

Just hours after her text to Meadows, Ingraham spoke about the insurrection on her nightly show. Instead of warning that Trump was ruining his legacy, as she did in her message to Meadows, the host refused to disparage the then-president and attempted to distance him from the rioters, some of whom she falsely claimed were members of antifa.

“From a chaotic Washington tonight, earlier today the Capitol was under siege by people who can only be described as antithetical to the MAGA movement,” she said, opening of the episode. “Now, they were likely not all Trump supporters, and there are some reports that antifa sympathizers may have been sprinkled throughout the crowd.”

Ingraham also attempted to downplay the attack with other misinformation. At one point, she asserted that just “three dozen” people had breached the Capitol building, though she was corrected by her guest, House Minority Leader Kevin McCarthy (R-Ca.).

Meanwhile, Kilmeade failed to admonish the president and appeared to imply that the rioters were not Trump supporters during an appearance on Fox that night.

“I do not know Trump supporters that have ever demonstrated violence that I know of in a big situation,” he said.

Hannity, for his part, did condemn the attack, but he too attempted to spread the false narrative that Trump’s supporters were largely not responsible for the insurrection, claiming that “the majority of them were peaceful.”