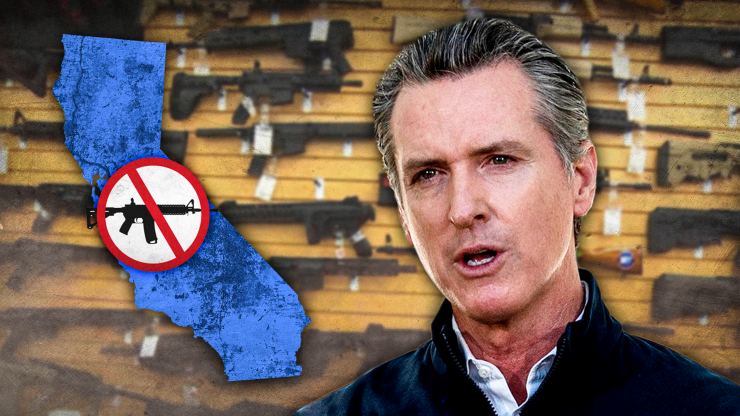 The proposal would allow citizens to file lawsuits against anyone who sells or manufactures assault-style weapons.

California Gov. Gavin Newsom (D) announced Saturday that his administration will push for a new measure to tackle gun control modeled after the enforcement mechanism in Texas’ law that bans most abortions after six weeks.

The Texas law, enacted earlier this year, allows private citizens to sue anyone who helps someone obtain an abortion after six weeks including doctors, clinic staff, counselors, as well as those who help pay for the procedure and even rideshare drivers who take patients to a provider.

Citizens who file such lawsuits do not need to have a connection to the defendants or prove any personal injury. The provision effectively gives private citizens, rather than state officials, the sole ability to enforce the law, thus insulating the government from lawsuits and making it much harder for the policy to be challenged in federal courts.

Newsom’s announcement came in response to the Supreme Court’s decision a day earlier to allow legal challenges to the Texas law but keep the controversial ban in place while litigation plays out in lower courts.

Newsom argued on Twitter that the latest ruling set a precedent for states to create similar legal tools to protect their laws from federal court reviews.

“SCOTUS is letting private citizens in Texas sue to stop abortion?! If that’s the precedent then we’ll let Californians sue those who put ghost guns and assault weapons on our streets,” he wrote.

In a press release, Newsom further expanded his analogy to apply to a recent decision from a federal judge, who in June struck down California’s decades-long ban on the sale and manufacture of assault-style weapons.

In that ruling, federal district court Judge Robert Benitez claimed the long-standing ban violated the Second Amendment and specifically pointed to the utility of AR-15’s in his decision.

“Like the Swiss Army knife, the popular AR-15 rifle is a perfect combination of home defense weapon and homeland defense equipment,” he wrote at the time. “Good for both home and battle.”

Citing that decision in his statement, Newsom argued that “if states can now shield their laws from review by the federal courts that compare assault weapons to Swiss Army knives, then California will use that authority to protect people’s lives, where Texas used it to put women in harm’s way.”

“I have directed my staff to work with the Legislature and the Attorney General on a bill that would create a right of action allowing private citizens to seek injunctive relief, and statutory damages of at least $10,000 per violation plus costs and attorney’s fees, against anyone who manufactures, distributes, or sells an assault weapon or ghost gun kit or parts in the State of California,” he continued.

“If the most efficient way to keep these devastating weapons off our streets is to add the threat of private lawsuits, we should do just that.”

Newsom’s measure — which marks the first proposal to use the Texas enforcement mechanism for another kind of policy goal — would effectively bypass Benitez’s ruling by removing the state’s ability to enforce the law and protecting the ban from judicial challenges.

Khiara Bridges, a professor at UC Berkeley School of Law, told the Los Angeles Times that while Newsom’s law will likely be struck down if it ends up before the Supreme Court, the conservative majority could find a way to do so while still upholding the Texas policy.

“We have six justices, and it’s looking more like five these days, who like gun rights and don’t like abortion rights,” she said. “They’re willing to disregard some precedent while venerating other precedent. I have no doubt whatsoever that the Supreme Court will find some bizarre, disingenuous argument to distinguish gun rights from abortion rights.”

Still, Bridges also argued that Newsom’s proposal could push the high court to correct what she believes is a dangerous precedent that allows states to write laws to bypass federal court review.

See what others are saying: (The Los Angeles Times) (Vox) (The New York Times)