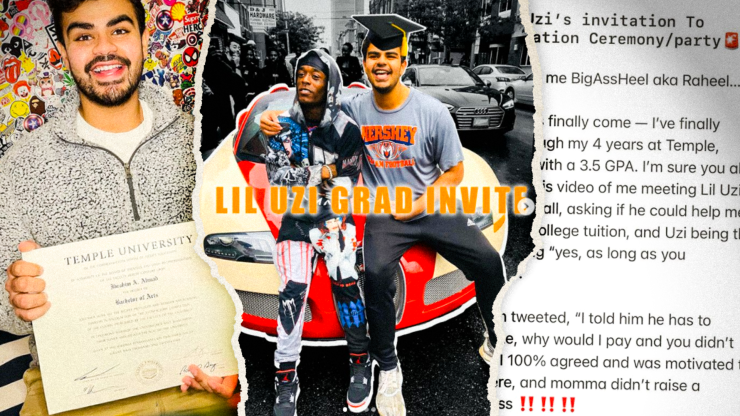 Lil Uzi Vert told the fan in 2019 that he would only pay for his tuition on the condition that he finish his degree. That fan is now graduating in January.

The college student who went viral in 2019 after asking musician Lil Uzi Vert to cover his college tuition is set to graduate in January.

In the viral video, Raheel Ahmad ran into Uzi at the King of Prussia Mall in Pennsylvania and asked him if he could pay his $90,000 tuition at Temple University.

“$90,000? I could pay for that,” Uzi said. “But this is the thing, though, if I pay for your college tuition, are you gonna finish college or are you gonna bullshit?”

Uzi doubled down on the conditions of his promise in a tweet earlier this year, writing that Ahmad “has to graduate” in order to get paid.

On Monday, Ahmad posted a video to Instagram where he showed off his diploma and invited Uzi to his graduation ceremony on Jan. 26. He said he finished school with a 3.5 GPA and a major in political science but explained that his journey to get to that point was not always easy.

“I come from a big family and was raised by a single, widowed mother,” Ahmad said. “Finances were always a struggle. After my dad passed away, we had to live paycheck to paycheck. And honestly, my mom is a hero.”

“You may not know this, Uzi, but the day that we met at King of Prussia mall on August 22nd, 2019, I was not in a good place mentally,” he continued. “But our one-minute interaction changed my life for the better. You have given me a sense of hope and optimism. Your acknowledgment and response to my ask for help has shifted my mindset to believe that there can be a light at the end of the tunnel.”

Ahmad said it was “only fitting” for Uzi to attend his graduation ceremony and party since he played such a big role in his steps towards graduation. He has started a social media initiative encouraging others to tag Uzi in posts about the upcoming event in hopes that he will attend.

Ahmad also said that he plans on using his degree to fight for college tuition prices to be lower and more accessible to students nationwide.

“College can’t be this expensive when it’s meant to be for a more stable and better future,” he said. “And as a political science major, I’m going to be using my platform to advocate for college tuition reform.”

It is unclear if Uzi has given Ahmad the $90,000. In June, Ahmad said he was set to receive the payment after the fall semester, but he did not specifically say in his video if he has received the money or not. On Monday, the soon-to-be-graduate tweeted that Uzi “hasn’t come thru yet,” implying that Uzi has either not yet paid the tuition or has not RSVPed to the graduation invitation. Uzi has not made a public comment regarding Ahmad’s graduation.