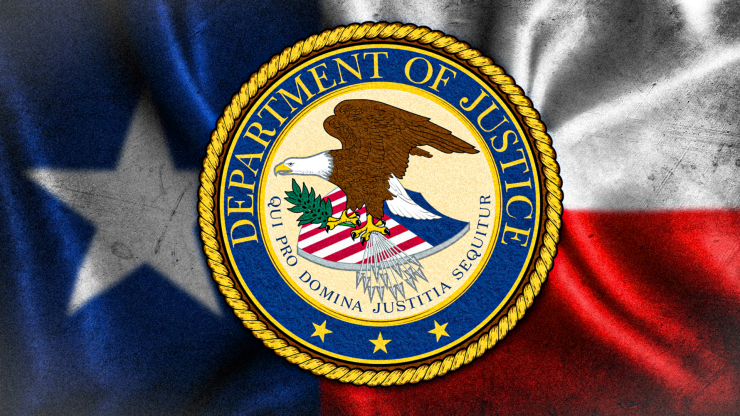 The agency accused Texas Republicans of intentionally redrawing district maps to weaken the votes of minority populations that have driven the state’s growth over the last decade.

The Justice Department filed a lawsuit against Texas on Monday arguing that the state’s plans to redraw voting maps discriminate against Black and Latino voters while giving more power to white people.

The DOJ specifically claims that the redistricting maps — which are done after every census — violate the Voting Rights Act (VRA) by essentially weakening the influence of voters of color who have driven population growth in Texas.

According to the lawsuit, 95% of the state’s four million-person population growth over the last decade has been attributed to minorities, and specifically Latinos. That has resulted in Texas being the only state to gain two new congressional seats in the last census.

The DOJ, however, alleges that Texas Republicans have given those two new seats to predominantly white communities and preserved seats held by white GOP members. On top of that, it claims Republican leaders have also intentionally crafted the state’s maps to dilute the increased strength of minorities’ voices in the voting process that should have come from the demographic shifts.

The state has achieved this, the suit says, either by eliminating minority districts altogether or redrawing lines in a way that concentrates power for white voters.

For example, the agency outlines multiple instances where the districts were redrawn so groups of minority voters in urban areas will now be counted in the same districts as rural, predominantly white areas to ensure white voters are the majority.

In one instance, the DOJ maintains that Texas “surgically excised” minority communities from the heart of the Dallas-Fort Worth area by grouping their neighborhoods with heavily white rural counties, including some that were “more than a hundred miles away.”

In another, the agency argues that the state “intentionally eliminated a Latino electoral opportunity” in a West Texas-based congressional district where courts had previously found VRA violations in the last two redistricting cycles.

“This is not the first time Texas has acted to minimize the voting rights of its minority citizens,” the complaint states. “Decade after decade, Texas has enacted redistricting plans that violate the Voting Rights Act.”

Beyond redistricting, the Justice Department’s new lawsuit marks the second complaint it has filed against Texas over voting rights in the last few weeks.

Last month, the agency sued the state over its new restrictive voting law, arguing that it will disenfranchise “voters with limited English proficiency, voters with disabilities, elderly voters, members of the military” deployed abroad.

But this latest complaint goes beyond Texas, marking the first legal action the DOJ has taken to challenge redistricting maps since states began redrawing them after the latest census.

According to FiveThirtyEight, 18 states have now finalized their new congressional maps this year, and some are already showing signs of gerrymandering.

“Some of the most heavily biased maps this cycle have been enacted by Republicans in North Carolina and Ohio,” the outlet reported, though it noted that both states have already been sued for racial or partisan gerrymandering.

Those challenges, however, are unlikely to play out before the midterm elections in November when control of Congress is in play.

The same goes for the department’s case against Texas, though the agency has asked a federal court to block the state from holding its upcoming March primaries using the challenged maps.

Even if those matters are resolved, as The New York Times reported, restrictive voting laws implemented by Republicans in key battleground states “could be in effect for multiple election cycles before the courts decide whether they are constitutional.”

See what others are saying: (The New York Times) (The Texas Tribune) (NPR)