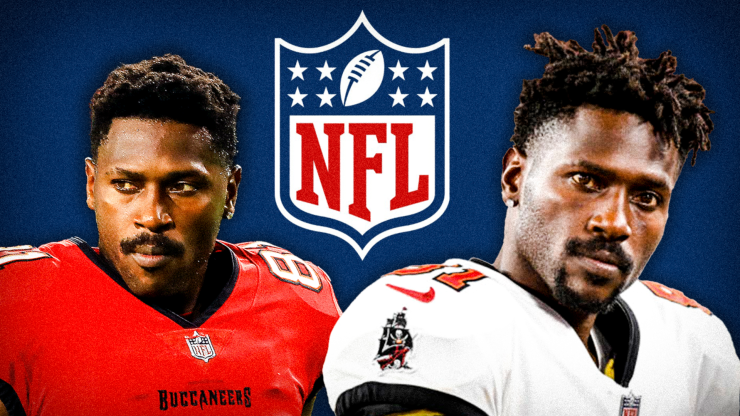 A Tampa Bay Times previously alleged that Brown had obtained a card that falsely claimed he had received a COVID-19 vaccine.

The NFL announced Thursday that it had suspended wide receiver Antonio Brown and two other Tampa Bay Buccaneers players for misrepresenting their COVID-19 vaccination status.

The suspensions will last three games. According to the football league, all three players have accepted the disciplinary action and will not appeal.

Brown has not played a game since mid-October due to an ankle injury. He, along with safety Mike Edwards, will be able to return to the field on Dec. 26. The league said that free-agent wide receiver John Franklin III is ineligible for the next three games if signed by the team.

“The health and safety of players and personnel is our top priority,” the NFL and the NFL Players Association said in a joint statement. “The protocols were jointly developed working with our respective experts to ensure that we are practicing and playing football as safely as possible during the ongoing pandemic. The NFL-NFLPA jointly reinforce their commitment and further emphasize the importance of strict adherence to the protocols to protect the well-being of everyone associated with the NFL.”

The suspension comes weeks after the Tampa Bay Times reported that Brown previously obtained a fake vaccination card, which is a federal crime. The outlet was tipped by his former live-in chef, and the report included screenshots of text messages Brown allegedly sent inquiring about fake cards. According to the Times, Brown was willing to pay $500 for a fake card that said he received the Johnson & Johnson jab.

Following the report, the Buccaneers released a statement saying it reviewed the cards submitted by players and found “no irregularities.”

According to ESPN, Brown brought the card to training camp but upon learning that he could get into serious trouble for doing so, opted to get the vaccine.

“Mr. Brown is vaccinated and continues to support the vaccine for any person for whom it is appropriate,” Sean Burstyn, an attorney for Brown, said in a statement. “The NFL made its determination and, instead of going through the drawn out and distracting process of challenging the outcome, Mr. Brown wrapped this up promptly and he will make this most of this time by treating his ankle injury. Mr. Brown will be motivated, well rested, and in the best shape of his life when he returns in [W]eek 16.”

The NFL has not commented on the vaccination status of any of the suspended players.

The league’s statement said the team will not be fined over the misleading claims from Brown, Edwards, and Franklin. While the NFL did not specify how Edwards and Franklin misrepresented their vaccination status, several reports have indicated that they, too, had fake cards.

“We appreciate the league’s timely handling of this matter and recognize the importance of the health and safety protocols that have been established,” the Buccaneers said in a team statement. “We will continue to implement all league COVID-19 protocols.”

See what others are saying: (ESPN) (The New York Times) (Tampa Bay Times)