Many have argued that it is insensitive to theorize about a public figure’s sexuality, especially if they have already tried to quell such rumors in the past.

Twitter users are shutting down speculation about singer Shawn Mendes’ sexuality following his split with his girlfriend of two years, Camila Cabello.

“Hey guys, we’ve decided to end our romantic relationship but our love for one another as humans is stronger than ever,” the two musicians wrote in a joint statement posted to each of their Instagram stories. “We started our relationship as best friends and will continue to be best friends. We so appreciate your support from the beginning and moving forward.”

Shortly after the announcement, fans quickly began spreading long-shared rumors that Mendes is gay. The public has speculated about the “Stitches” singer’s sexuality for the majority of his career despite the fact that he has said he is straight and has dated multiple women. Some have argued that his relationship with Cabello was fake and suggested that their break-up could allow Mendes to come out of the closet.

Others, however, quickly condemned people for theorizing about Mendes’ private life. Many believed it was insensitive and disrespectful to repeatedly discuss a star’s sexuality when they have not revealed that they are gay, while others thought this kind of postulation was akin to outing Mendes.

“Calling Shawn Mendes gay is not the flex y’all think it is,” one person wrote. “If he is gay y’all are essentially trying to out him. And if he’s not you’re going against everything we preach about sexuality and behavior not being synonymous.”

“If someone says they’re straight, believe them until they say otherwise,” another person wrote. “Speculation and being outed are the exact things you didn’t want to happen to you. Stop.”

Some also argued that saying Mendes is gay just because he might display feminine mannerisms is damaging to all men and their relationships with masculinity, regardless of their sexuality. As more jokes continued to spread, many simply slammed the remarks as unfunny and unproductive.

Mendes has previously denied rumors about his sexuality on multiple occasions. He said that while there is nothing wrong with being gay, he is not himself.

“There was a desperation for me to come out as being gay, which is such a ridiculous thing,” he told The Guardian in Dec. 2020. “I got upset because I know people who are gay who haven’t come out and I know the suffering they experience because of that. It’s just completely ignorant and insensitive of people to be on that shit.”

“It’s such a tricky thing,” he added just a few days later on the Armchair Expert podcast. “You want to say, ‘I’m not gay but it’d be fine if I was gay — but also there’s nothing wrong with being gay but I’m not.’ You don’t really know how to respond to the situation.”

“Everyone’s been calling me gay since I was 15 years old,” he continued. “I’m not gay and I’m like, ‘What does that mean?’ I had these problems with the way my voice sounded. I’m like, ‘How do I sit?’ I’m always first to cross my legs and sit with a position of this feminine style and I really suffered with that shit.”

He has not responded to the newest wave of speculation.

See what others are saying: (Los Angeles Times) (Newsweek) (We Got This Covered)

$2 Billion Lawsuit Filed Against Travis Scott and Other Astroworld Organizers 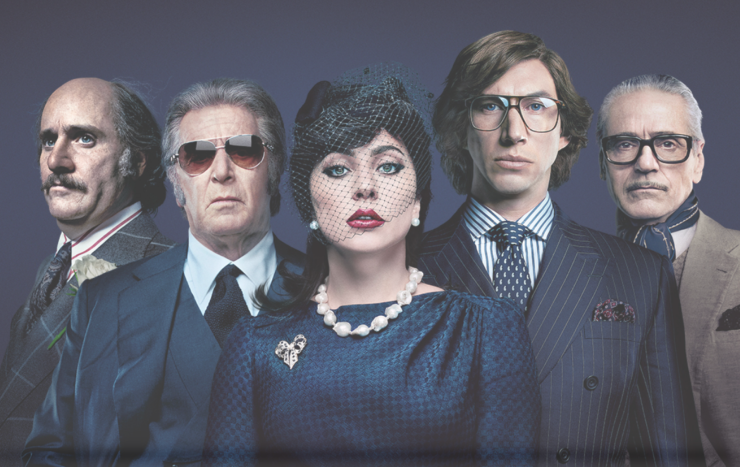 The heirs to the designer legacy said they were not consulted during the production of the Ridley Scott picture.

Members of the Gucci family released a statement Monday condemning their “far from accurate” portrayal in Ridley Scott’s latest film “House of Gucci.”

The film stars Lady Gaga as Patrizia Reggiani, who was convicted for hiring a hitman to carry out the murder of her ex-husband Maurizio Gucci, played by Adam Driver. Other members of the designer dynasty are played by Academy Award-winning actors Al Pacino, Jeremy Irons, and Jared Leto.

“House of Gucci” has received mixed reviews from critics, but the Gucci family has made it clear they are not fans of the picture. They first released their scathing statement to Italian news agency ANSA. Variety published a full English translation of the release.

“The production of the film did not bother to consult the heirs before describing Aldo Gucci – president of the company for 30 years – and the members of the Gucci family as thugs, ignorant and insensitive to the world around them, attributing to the protagonists, events, a tone and an attitude that never belonged to them,” the statement said. “This is extremely painful from a human point of view and an insult to the legacy on which the brand is built today.”

The Gucci heirs specifically slammed the depiction of Reggiani. The family argued that the film crossed a line by “suggesting an indulgent tone towards a woman who [was] definitively convicted of having been the instigator of the murder of Maurizio Gucci.”

“[She] is painted not only in the film, but also in the statements made by cast members, as a victim who was trying to survive in a masculine and macho corporate culture,” the statement continues. “This couldn’t be further from the truth.”

It closes by saying the Gucci family “does not deserve to be disturbed to stage a film that is not true and that does not do justice to its protagonists.”

“The members of the Gucci family reserves every right to protect the name, image and the dignity of their loved ones.”

Other Inside Criticisms of The Film

This is not the first time the family has criticized “House of Gucci.” Back in April, Patrizia Gucci, one of Mauricio’s second cousins, told the Associated Press that the production was “stealing the identity of a family to make a profit.”

Scott dismissed the criticisms in an interview with BBC.

“I don’t engage with that,” he told the outlet. “You have to remember that one Gucci was murdered and another went to jail for tax evasion so you can’t be talking to me about making a profit. As soon as you do that you become part of the public domain.”

Designer Tom Ford, who is briefly played by Reeve Carney in the film, also slammed “House of Gucci” in an essay for Air Mail. He compared some scenes to a “Saturday Night Live” parody and said he felt as though he “had lived through a hurricane” when the film ended. Ford’s largest issue, though, was how the film treated a real-life death.

“It was hard for me to see the humor and camp in something that was so bloody,” he wrote. “In real life, none of it was camp. It was at times absurd, but ultimately it was tragic.” 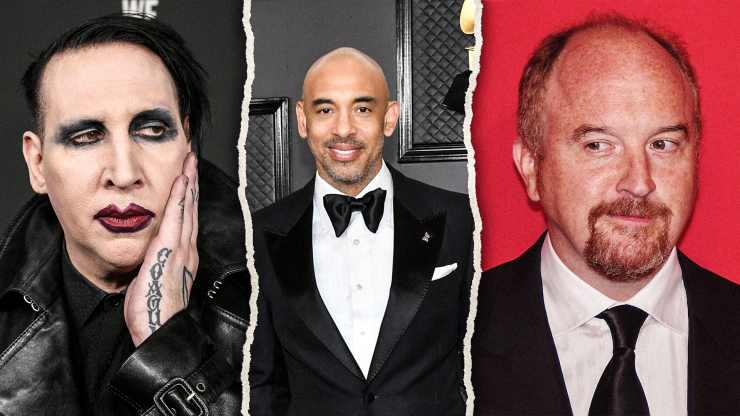 CEO Harvey Mason Jr. said the Academy is not “in the business of restricting people” from getting nominated.

Manson was nominated for his appearance on Kanye West’s album “Donda,” which landed in the Album of The Year category. Earlier this year, Manson was accused of sexual assault, rape, and psychological abuse by multiple victims.

C.K., who previously admitted to sexual misconduct, was nominated for Best Comedy Album.

While speaking to The Wrap, Mason argued that the Recording Academy should not consider an artist’s personal life in its nomination process.

Even though Mason believes artists with serious accusations levied against them should not be excluded from nominations, he did say the Academy will consider those factors when it comes to performances and other on-camera appearances.

“What we will control is our stages, our shows, our events, our red carpets,” he explained. “We’ll take a look at anyone who is asking to be a part of that, asking to be in attendance, and we’ll make our decisions at that point. But we’re not going to be in the business of restricting people from submitting their work for our voters to decide on.”

Manson and C.K. were not the only controversial figures who received nominations. Comedian Dave Chappelle was nominated in Best Spoken Word Album for his special “8:46.” Last month, he faced severe backlash for transphobic comments he made in a separate special titled “The Closer.” Chappelle was slammed by several major LGBTQ+ organizations over the special but has defended himself against criticisms.

Rapper DaBaby was also condemned by LGBTQ+ groups this summer after he made homophobic remarks during her performance at the Rolling Loud festival in Miami. He received Grammy recognition for his work on “Donda” and Justin Bieber’s “Justice.”

See what others are saying: (The Wrap) (Pitchfork) (Rolling Stone) 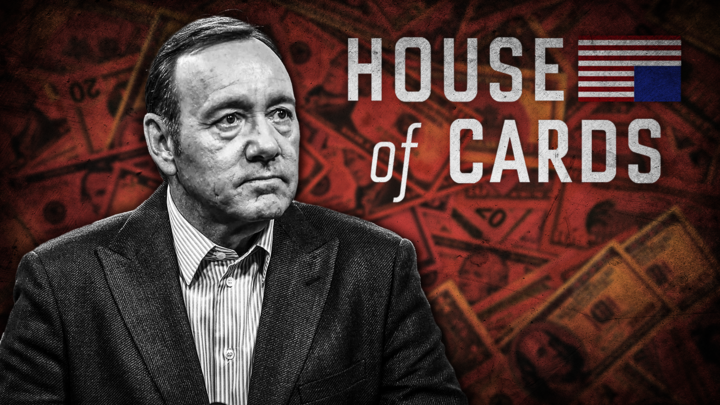 The studio argued that Spacey cost it millions after multiple sexual harassment and abuse claims against the actor forced it to suspend production, fire him, and shorten the show’s final season.

Actor Kevin Spacey and his production companies have been ordered to pay nearly $31 million dollars for breach of contract to MRC, the studio behind the Netflix series “House of Cards.”

The ruling was actually made by an arbitrator more than a year ago but was only made public Monday when MRC’s lawyers petition a California court to confirm the award.

Spacey was a centerpiece of the hit series and also served as one of its executive producers. However, during filming for its final season in 2017, an actor named Anthony Rapp accused Spacey of making a sexual advance towards him when Rapp was 14 in 1986.

Netflix suspected production in the wake of Rapp’s claims, but soon after, others came forward with allegations of sexual harassment and assault against Spacey, including several former and then-current crew members of “House of Cards.”

Netflix eventually fired Spacey, whose list of accusers grew to at least 15 people.

In the secret arbitration last year, MRC argued that Spacey “repeatedly breached his contractual obligations.” It added that he and his companies are liable for his behavior, which allegedly caused the studio to lose millions given what it had already invested in developing, writing, and shooting the final season.

MRC also said the Emmy-winning series brought in less revenue when it finally aired because it had to be shortened from 13 to 8 episodes to write out Spacey’s character, Frank Underwood.

According to Variety, Spacey filed a counterclaim, alleging that he was owed money after he was dropped from the series and did not breach his contract. That claim was later rejected and the arbitrator ultimately agreed with MRC, issuing the massive reward, which includes compensatory damages and lawyers’ fees.

Spacey and his team have not commented on the news as of Tuesday, though the studio has since issued a statement saying, “The safety of our employees, sets and work environments is of paramount importance to MRC and why we set out to push for accountability.”

See what others are saying: (Variety) (CNN) (The New York Times)