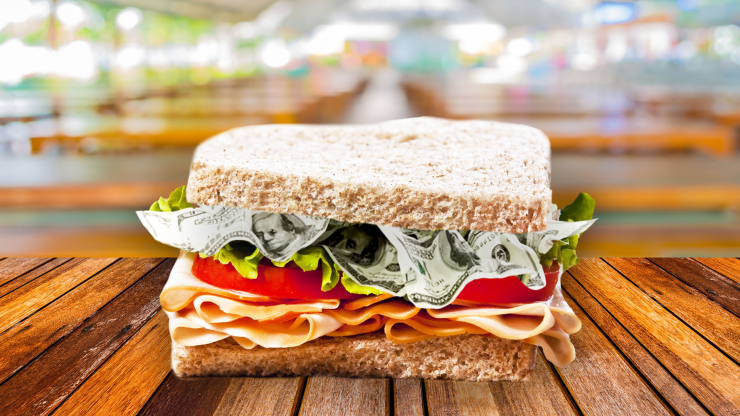 The shortages are largely driven by a lack of workers in the food distribution and manufacturing sectors, which has caused supply chain disruptions, production cuts, price hikes, and delivery delays.

The U.S. Department of Agriculture said Wednesday that it will send $1.5 billion to help finance school meals as districts across the country struggle to feed their students

While there are a number of factors driving the crisis, labor shortages across several industries have played the biggest role.

Districts nationwide have been grappling to find cafeteria workers to fill jobs that offer minimal pay and benefits. That problem has been exacerbated during the pandemic when many are concerned about outbreaks in schools that have refused to take basic safety precautions or been banned from doing so by Republican leaders.

Food service workers that are employed have regularly stayed home sick or been forced to quarantine after exposure to the COVID-19.

Factories have had a difficult time finding workers to stock warehouses or work assembly lines, forcing them to cut production and causing shortages for key ingredients that schools buy in bulk like dairy, whole grains, vegetables, and meat.

Vendors have also incurred higher costs which they have passed along to already underfunded public schools.

Even getting those supplies to schools has proven difficult because food delivery companies have faced obstacles staffing truck drivers, causing delivery delays.

Some food companies have left the school meals business altogether, while others have discontinued certain products. School officials have reported that some distributors have canceled school food contracts with little or no notice at all, and when the trucks do show up, schools have no idea what might be inside.

As a result, schools have been forced to provide much more limited options and add substitutes that do not meet federal nutritional standards.

For example, school officials in a Missouri city told The New York Times they have to take regulator trips to Sam’s Club and other wholesale companies. Once there, they find themselves clearing the stores out of all frozen pizzas, tater tots, hot dogs, and other products.

One Kansas school district also told The Times it ran out of vegetables for two days last month, and another in Minnesota has had to make an emergency stash of frozen grilled cheese sandwiches in case it runs out of other food.

All of that has put schools in incredibly tight situations on schools, especially because many low-income American children get the majority of their daily nutrition from school.

Meanwhile, the crisis also comes as more families are capitalizing on free school meals under a USDA waiver program that includes the option for schools to offer free meals to all students through the 2022 school year.

While the agency’s $1.5 billion in new funding can help address food price hikes and allow schools to offer more competitive salaries to food service workers, many argue it still does not address the supply chain issues that are the driving forces behind this problem.

Until that is resolved, it remains unclear how far this latest funding will go to actually help the issue without additional action on the part of food distributors and manufacturers.

See what others are saying: (The Washington Post) (Education Week) (The New York Times)