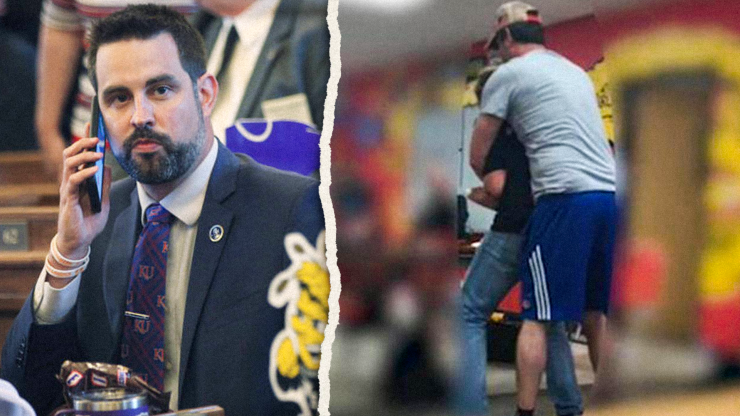 Kansas Rep. Mark Samsel (R) was given a 90-day suspended jail sentence and one year of probation Monday after pleading guilty to three misdemeanor charges of disorderly conduct.

While that specific altercation doesn’t appear to have been caught on video, student footage shows what seems to be the aftermath of the alleged assault.

“I’m simply built different, Mark. I don’t feel pain,” the student jokingly tells Samsel after picking himself up off the ground. Samsel responds by asking if the student is about to cry.

“You want to go to the nurse? She can check it for you?” Samsel adds.

“Make babies! Who likes making babies? That feels good, doesn’t it? Procreate,” Samsel said at another point in the video. “You haven’t masturbated? Don’t answer that question.”

Other notable quotes include, “Would you like me to introduce [you] to a sophomore who’s tried killing himself three times because he has two parents and they’re both females?,” and, “I could put the wrath of God on your right now because that is what he is trying to do. You should run and scream cause the devil’s getting the hell out of my classroom.”

After students reported his behavior, Samsel told local news outlets that he didn’t do anything wrong and that the situation was actually “planned.”

“The kids and I planned ALL this to SEND A MESSAGE about art, mental health, teenage suicide, how we treat our educators and one another. To who? Parents. And grandparents. And all of Wellsville,” he also wrote on Snapchat, according to The Star.

However, he later told investigators that he what at his “wit’s end” with “misbehaving students.” Then last month, he announced via Facebook that he had sought mental health treatment and was giving up his substitute teaching license, describing the situation as an “isolated episode of mania with psychotic features’‘ prompted by “extreme stress, pressure and agitation.”

Samsel faced additional consequences in conjunction with his suspended sentence and year of probation. He was also banned from using social media, unless for political purposes. He cannot have contact with the students who reported him and must write apology letters to those involved. He must also follow mental health treatment recommendations and take any prescribed medications

Samsel, for his part, apologized in his court appearance via Zoom, saying he never “intended for anyone to get hurt.”

Some parents seem happy with the sentence, like Joshua Zeck, who told the Star, “From the beginning, all I wanted was for Mark to get some help.”

“I don’t want to see anybody go to jail. So if this does him so good and he’s doing better, I’m happy to hear that,” Zeck continued.

Others in the community told the paper that his sentencing was too lenient, including Mary Woods, whose niece had class with Samsel the day of the incident.

“I don’t think that’s enough. He laid his hands on a kid. … He traumatized a lot of these kids. I think it’s bullsh*t, to say so myself.”

As far as whether Samsel will keep his job in the state legislature, Kansas House Speaker Ron Ryckman said that’s up to voters to decide.

See what others are saying: (The Kansas City Star)(Insider)(NBC News)