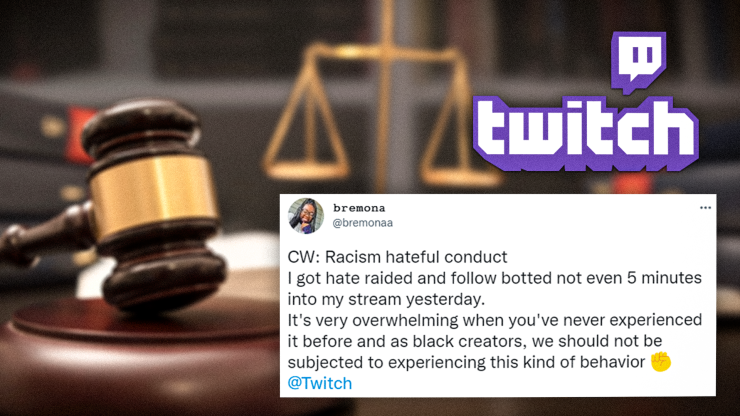 Twitch said the two users were so relentless in their racist, sexist, and anti-LGBTQ+ hate raids that they forced some creators to stop streaming.

Twitch has filed a lawsuit against two of its users for allegedly creating hate raid bots that targeted Black and LGBTQ+ streamers with racist, sexist, and anti-LGBTQ+ content.

The users named in the lawsuit, filed late Thursday, are CruzzControl and CreatineOverdose. While their legal names are currently unknown, Twitch said it traced one to the Netherlands and the other to Austria. It added that it will amend the suit to include their real names once it learns them.

According to the lawsuit, CruzzControl operated nearly 3,000 bots that were used to spam the discriminatory and harassing content. Meanwhile, CreatineOverdose used “their bot software to demonstrate how it could be used to spam Twitch channels with racial slurs, graphic descriptions of violence against minorities, and claims that the hate raiders are the KKK.”

Twitch didn’t just stop at accusations of hateful actions and rule-breaking. It even claimed the two users were so forceful in their efforts to attack creators that they pressured some to stop streaming altogether, “eliminating an important source of revenue for them.”

Twitch creators have long complained about hate raids, but a number of small creators began organizing a cohesive movement in early August following what appeared to be a growing number of hate raids.

Many demanded that Twitch address the situation by holding round tables with affected creators and enabling different features that would give them the ability to shut down incoming raids. Critics also called on the platform to provide detailed information about how it plans to protect creators moving forward. While Twitch did promise to implement fixes, a large portion of users weren’t satisfied with its messaging.

The bulk of users’ efforts culminated on Sep. 1 when various creators participated in #ADayOffTwitch, a one-day walkout designed to reduce traffic on the platform.

Despite Twitch’s lawsuit, a number of users have still said they won’t be completely satisfied with the platform’s actions until more is accomplished. For now, their primary goal is to have Twitch directly outline what steps it’s taking to prevent hate raids.

In its lawsuit, Twitch does make a cursory mention of several changes it said it’s introduced recently, including “implementing stricter identity controls with accounts, machine learning algorithms to detect bot accounts that are used to engage in harmful chat, and augmenting the banned word list.”

“Twitch mobilized its communications staff to address the community harm flowing from the hate raids and assured its community that it was taking proactive measures to stop them,” it added. “Twitch also worked with impacted streamers to educate them on moderation toolkits for their chats and solicited and responded to streamers’ and users’ comments and concerns.”

See what others are saying: (The Washington Post) (BuzzFeed News) (Kotaku)