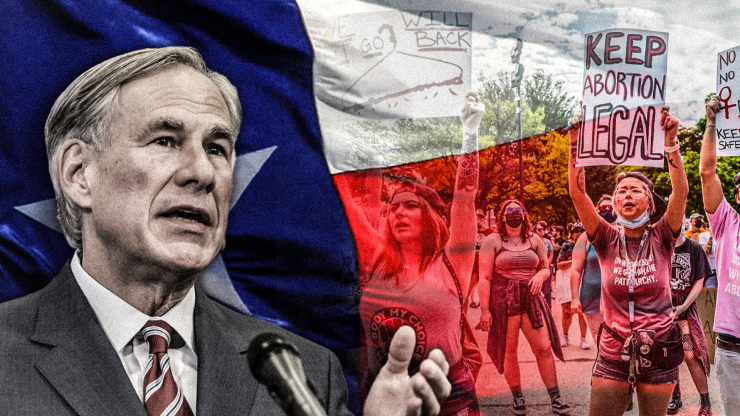 The governor also defended the six-week abortion ban’s lack of exceptions for rape and incest by saying the state will “eliminate all rapists.”

Texas Gov. Greg Abbott (R) on Tuesday defended the state’s new controversial law that bans abortion after six weeks, before many know they are pregnant, after facing criticism that the policy does not provide exceptions for rape and incest.

During a press conference, Abbott refuted a reporter’s assertion that the law forced victims of rape and incest to carry their pregnancies to term, claiming that it “provides at least six weeks for a person to be able to get an abortion.”

“Let’s make something very clear: Rape is a crime,” the governor continued.

“And Texas will work tirelessly to make sure that we eliminate all rapists from the streets of Texas by aggressively going out and arresting them and prosecuting them and getting them off the streets.”

Backlash Over Remarks on Abortions at Six Week

Abbott’s claim that rape victims would still have plenty of time to get an abortion was widely criticized by many, including Rep. Alexandria Ocasio-Cortez (D-N.Y.), who called his remarks “disgusting” in a now-viral interview on CNN,

Those comments were echoed by a lot of other people who pointed to data from Planned Parenthood that said 85-90% of people who obtain abortions in Texas are at least six weeks into their pregnancy.

Many also took aim at Abbott’s claim that he was going to “eliminate all rapists” by mocking the governor.

“Wait. Governor Abbott had a solution to end all RAPE and he sat on it until now?” Texas State Representative Gene Wu (D) tweeted.

Others argued that historical evidence proves Abbott’s promise was ignorant.

According to data from the Justice Department analyzed by the Rape, Abuse & Incest National Network (RAINN), only 1 out of every 3 rapes and sexual assaults are reported.

Out of every 1,000 assaults, only 50 lead to arrest, and only 25 lead to incarceration, meaning that more than 97% of people who commit assault walk free.

Some critics also said that Abbott’s goal of getting rid of “all rapists” relied on a faulty conception of who actually perpetrates sexual crimes.

“The majority of people who are raped and who are sexually assaulted are assaulted by someone who they know,” Ocasio-Cortez told CNN. “And these aren’t just predators that are walking around the streets at night. They are people’s uncles, they are teachers, they are family friends.”

“And when something like that happens, it takes a very long time, first of all, for any victim to come forward,” she added. “And second of all, when a victim comes forward they don’t necessarily want to bring their case into the carceral system.”

See what others are saying: (The Washington Post) (NPR) (Business Insider)