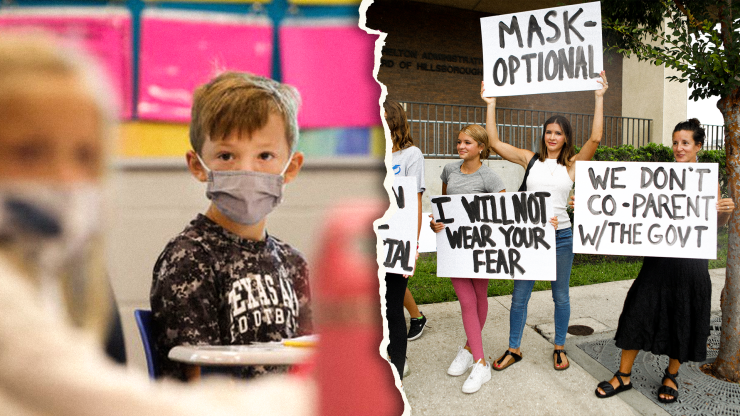 State-level bans on mask mandates and school districts’ decisions to ignore them have both drawn fire from parents.

The fight over mask mandates in schools has continued to escalate in recent weeks, driving some parents to violence and others to unusual methods of protest.

On Wednesday, the father of a high school student in Florida was arrested and charged with child abuse after allegedly pushing a student over a masking dispute.

According to NBC News, the man, Dan Bauman, was recording his own daughter entering the school without a mask when another girl tried to grab his phone. Bauman reportedly pushed the girl into a fence and twisted her arm “in an aggressive manner” before a school resource officer and a security guard pulled him off her.

Elsewhere in Texas, Tom Leonard, the superintendent of Eanes Independent School District, wrote in a letter to parents and staff last week detailing “a few sad moments” in the first week of the school year.

In one instance outlined by Leonard, a parent in the district assaulted a teacher by tearing off her face mask while other parents yelled at a different teacher.

On the opposite side of the debate, a dad in Texas stripped down to his underwear during a school board meeting Monday to argue that face-coverings in schools are necessary after the Dripping Springs Independent School District announced that masking would be optional.

Akers continued, amid cheers from the audience, arguing that people have to obey rules they may not like, like traffic laws and dress codes, but such policies are necessary for the safety and protection of society.

“It’s simple protocol, people,” he said while standing in his underwear as guards came to escort him away. “We follow certain rules for a very good reason.”

A Spotlight on Florida and Texas

While other extreme examples in the school mask debate have been documented in other states, Florida and Texas have received the most national attention for the mandate bans imposed by their governors.

Florida Gov. Ron DeSantis (R) has repeatedly threatened schools that disobey his executive order prohibiting mask requirements with funding cuts and other sanctions regardless of the legal questions over his authority to do so.

Despite those threats, several of Florida’s largest school districts have decided to buck the governor as the state continues to report the nation’s highest hospitalization rate and second-highest new caseloads.

As of Tuesday, the majority of public school students in the state are now being required to wear masks after two additional school districts approved mandates.

Similar battles have taken place in Texas, where several judges have blocked Gov. Greg Abbott’s efforts to prevent mask mandates in the state.

On Wednesday, a state district judge issued a temporary injunction against Abbott’s ban, ruling it cannot be enforced in Dallas County on the grounds that it impedes the ability of local officials to reduce the spread of the coronavirus.

However, on Thursday, the Texas Supreme Court ruled that the ban could stay in place while the legal proceedings played out.

See what others are saying: (Axios) (The Washington Post) (Bloomberg)

More Than 1 Million Without Power as Ida Heads to Mississippi