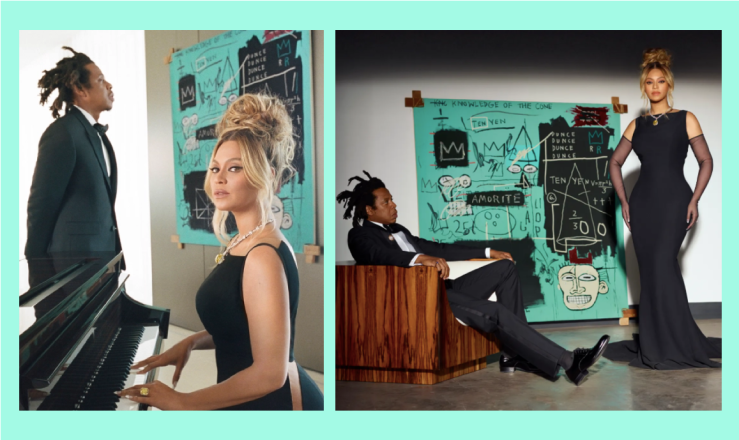 The star is now the first Black woman to wear the famous Tiffany Diamond, but the use of a unique painting in the jewelry brand’s campaign has upset some online.

Beyoncé is making history — and sparking backlash — with her new collaboration for Tiffany & Co.

The “Lemonade” singer and her husband Jay-Z are the new faces of the luxury jewelry company’s “About Love” campaign. In photos for the campaign, Beyoncé dawns the iconic 128-carat Tiffany Diamond. She is the first Black woman to ever sport the yellow gem, and the fourth woman to ever wear it since it was discovered in 1877.

“Beyoncé and JAY-Z are the epitome of the modern love story,” Alexandre Arnault, the Executive Vice President of Product & Communications at Tiffany, said in a statement. “As a brand that has always stood for love, strength and self-expression, we could not think of a more iconic couple that better represents Tiffany’s values. We are honored to have the Carters as a part of the Tiffany family.”

Prior to Beyoncé, the Tiffany Diamond was worn by socialite Mrs. Sheldon Whitehouse, then by actress Audrey Hepburn, and most recently by musician Lady Gaga. This marks the first time the stone has been featured in an ad campaign.

The campaign, however, is facing a significant amount of backlash over its inclusion of a rare Jean-Michel Basquiat painting. Titled “Equals Pi,” the work was made in 1982 and has been privately owned since then. It was recently sold to Tiffany earlier this year. Notably, the standout color in “Equals Pi” strongly resembles Tiffany’s famous robin’s-egg blue. In several photos, Beyonce and Jay-Z can be seen standing in front of the work.

According to Tiffany, the painting is making its public debut in the “About Love” campaign. Some outlets have alleged that the work has never been seen before, but according to Art News, it was featured in a Sotheby’s London auction in 1996.

Regardless, the painting has been largely kept from the public. Because of this, many are upset that a painting by such an important artist has been shielded and was only brought out to be featured in a luxury brand’s star-studded advertisement.

“The fact that they showed off this never-before-seen piece of art from Jean-Michel Basquiat for an ADVERTISEMENT doesn’t sit well with my spirits,” one person wrote on Twitter.

“Using never-before-seen Basquiat to sell jewels is the most anti-Art thing I’ve ever seen,” another person wrote.

Still, others defended the use of the Basquiat. Some claimed those upset over the matter were not actually art enthusiasts and were instead people looking for a reason to get mad at the famous couple.

Meanwhile, some argued that it was unfair to assume Basquiat, who died in 1988, might take issue with the campaign.

In fact, Arnault claimed that Basquiat was likely a fan of Tiffany and may have intentionally used its signature color in “Equals Pi” as a nod to the brand.

​​“We don’t have any literature that says he made the painting for Tiffany,” Arnault told Women’s Wear Daily. “But we know a little bit about Basquiat. We know his family. We did an exhibition of his work at the Louis Vuitton Foundation a few years back. We know he loved New York, and that he loved luxury and he loved jewelry. My guess is that the [blue painting] is not by chance. The color is so specific that it has to be some kind of homage.”

See what others are saying: (Women’s Wear Daily) (Art News) (The Independent)

Addison Rae Addresses Viral Trump Introduction, Says She Is Not a Supporter