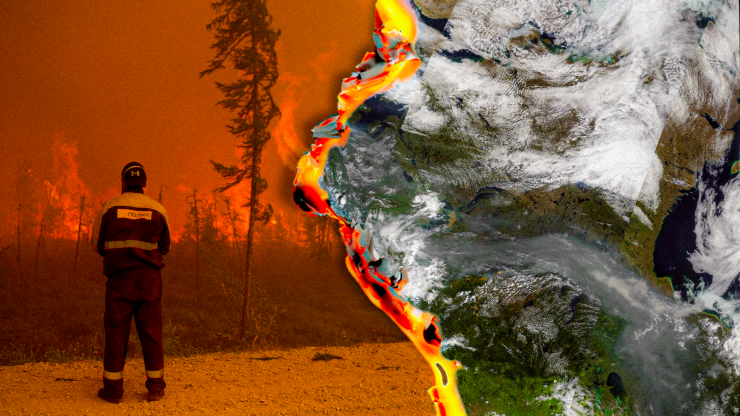 The major blaze comes as much of the northern hemisphere is experiencing record-breaking wildfires amid large droughts and warmer temperatures.

Worldwide, countries and regions have experienced record-breaking wildfires as climates in many areas continue to warm and drought increasingly become more common.

Since last week, Greece has been fighting at least 586 wildfires throughout the country amidst one of the worst heat waves in decades.

In a televised address on Monday, Prime Minister Kyriakos Mitsotakis told the nation that 63 organized evacuations had to take place as the fires approached towns and villages. Some areas, like the island of Evia, saw families struggling to scramble onto boats and ferries in the middle of the night to escape oncoming flames early Monday.

So far, hundreds of homes have been destroyed, and the government’s response has been criticized by some as inadequate, leading to protests outside of the Greek Parliament Monday afternoon.

Scientists believe that Southern Europe will experience extreme wildfire seasons more often as the region has increasingly experienced larger droughts. Of notable concern alongside Greece is Croatia, which similarly has large areas of dry tinder and relatively underfunded fire brigades.

The flames aren’t just affecting Greece. Algeria is now in its second day of combatting large wildfires and the situation continues to be dire. Authorities reported Wednesday morning that 65 people have died in blazes, about half of whom were soldiers who were deployed as emergency firefighters.

These fires are centered around Kabylia, a region about 60 miles east of the capital that is home to the Berber ethnic group and dry terrain.

Locals are concerned that the fires were at least partially started by arson. Interior Minister Kamel Beldjoud said on national television Wednesday afternoon that the 30 fires ravaging the region were “highly synchronized,” adding that it “leads one to believe these were criminal acts.”

“Thirty fires at the same time in the same region can’t be by chance,” he continued.

Largest Fires in the World

In addition to Greece and Algeria, countries like Italy, Turkey, Spain, Peru, and Lebanon are also battling large blazes over the past week that have burned thousands of square miles.

Still, none are as big as the blazes Russia has been battling for weeks. In fact, all of the current wildfires around the world combined still aren’t as large as the current Russian forest fires. The fires there are mostly confined to the large regions of Siberia and Yakutia, both of which occupy the vast majority of the country.

The region is heavily forested and consistent droughts have led to a massive forest fire season, similar to what has occurred in California over the last decade. Unlike California, Siberia and Yakutia are extremely sparsely populated with few urban centers — meaning there have only been a few evacuation orders.

Generally speaking, firefighters let most of the fires burn out on their own as part of the natural life cycle of the region, despite their larger-than-normal size this year. However, scientists are concerned about the scope of this year’s fires they’ve been so large that massive clouds of smoke can cover the region for weeks, which has its own ecological problems.

These fires have contributed to clouds of smoke covering the North Pole for the first time in recorded history. That has prompted fears that prolonged periods of such coverage could lead to increased warming, further endangering the arctic permafrost and releasing trapped greenhouses gasses. In turn, that exacerbates the ongoing global climate crisis in a way that can’t be controlled, compared to the consumption of fossil fuels.

The fires are so concerning that Alexander Kozlov, Minister of Natural Resources and Ecology, called for a nearly 100% increase in the firefighting budget to $190 million.

See what others are saying: (CNN) (The New York Times) (The Moscow Times)

Japan Accused of Covering Up Lambda Variant Infection During Olympics