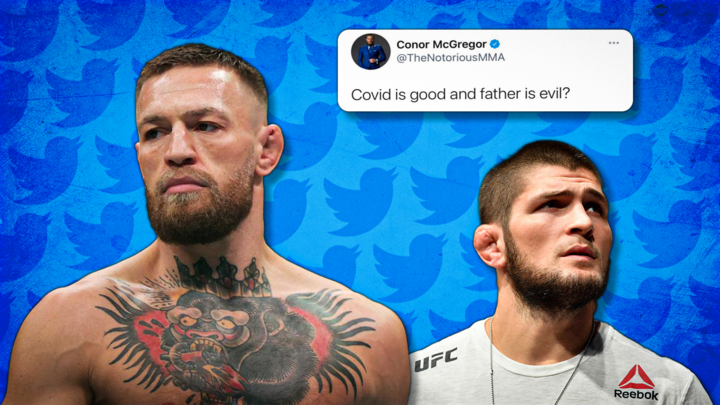 “How bout you go spend some time with your kids and family for a change and keep my name out of your mouth,” McGregor also warned after Nurmagomedov called him “evil’ for a second time.

Though the rivalry between the two dates back years, their most recent spat kicked off when Nurmagomedov congratulated Dustin Poirier for winning his trilogy fight against McGregor.

At the time, Nurmagomedov tweeted, “Good always defeats evil.” In response, McGregor said, “Covid is good and father is evil?”

Fellow fighters and fans have since condemned McGregor for crossing the line with his reply. For instance, UFC commentator and former two-weight UFC champion Daniel Cormier, who is a close friend of Nurmagomedov’s, said during his ESPN show “DC & RC” that McGregor’s post was a “cry for help.”

“He is just taking it way too far. When you’re dealing with death and Covid and all these other things that we’ve dealt with over the last year and a half, that’s all off-limits,” he added.

“Conor has all the money in the world, he has all the fame, but now when you start to dig at that level, it’s like somebody needs to get to McGregor and help him to start to kind of re-shift his mind and his focus and get him back to a better place. It’s unfortunate.”

In a recent interview on the “Hotboxin with Mike Tyson” podcast featuring former UFC star Henry Cejudo, Nurmagomedov was asked about McGregor’s remarks.

“Only evil can talk about your father, wife, kids, religion,” he said.“If you’re [a] normal human, you’re never going to talk about this stuff.”

He also speculated that McGregor may have been intoxicated when he tweeted, noting McGregor often tweets and later deletes his online outbursts.

“I wanna eat his children!!!! When’s the last time he’s even seen them actually? His wife? Mother?” he wrote. “How bout you go spend some time with your kids and family for a change and keep my name out of your mouth before you get trapped somewhere again you mightn’t be so lucky next time.”

McGregor has since deleted the tweet and is facing renewed backlash for showing little regret about his previous post.