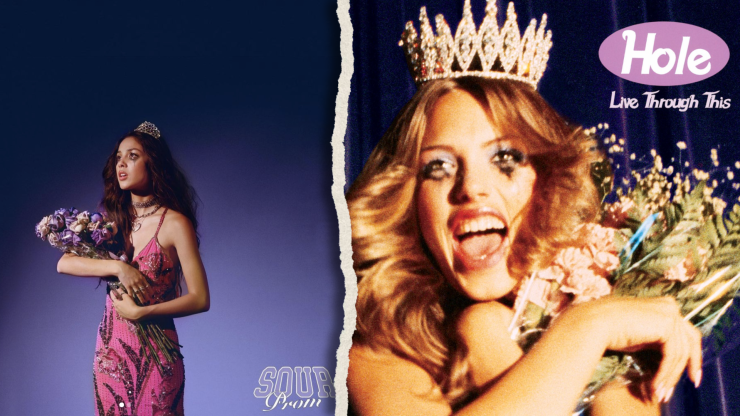 Like the cover of the 1994 album by the band Hole, promotions for Rodrigo’s “Sour Prom” concert film feature a distraught prom queen.

Rodrigo announced last week that she will be releasing a “Sour Prom” concert film, featuring her performing some of the biggest hits on her debut album “Sour.” In her announcement, the “driver’s license” singer posted a photo of herself holding flowers and wearing a tiara while mascara drips down her face. After seeing the image, Love got a case of déjà vu.

The cover art for Hole’s 1994 album “Live Through This” features a similar image. Love referenced it on social media Friday, sharing Rodrigo’s photo along with the caption “Spot the difference.”

Love was not the only person to make the comparison, as Rodrigo has been open about finding inspiration in music and fashion from the ‘90s. She ended up commenting on Love’s post, saying she is a fan of the alternative rock star.

“Love u and live through this sooooo much,” she wrote.

Love then seemingly requested that Rodrigo send her a bouquet of flowers from England as either a thank you or apology.

“Olivia – you’re welcome,” Love responded. “My favorite florist is in Notting Hill, London! Dm me for deets! I look forward to reading your note.”

While it seemed the two musicians may have wrapped things up on Instagram, over on Facebook, Love continued to criticize Rodrigo throughout the weekend. In several comments, she called the Disney star “rude” and said she lacked manners.

“It was rude of her, and [Rodrigo’s label] Geffen not to ask myself or [photographer] Ellen von Unwerth,” Love wrote. “It’s happened my whole career so Idc . But manners is manners!”

“Stealing an original idea and not asking permission is rude,” she continued in another comment. “There’s no way to be elegant about it. I’m not angry… But this was bad form.”

She also said she is awaiting flowers and a note from Rodrigo, which she hopes is “long.”

“Carrie” May Have Served as Inspiration for Both Artists

While Love continued to accuse Rodrigo of stealing the photoshoot idea from Hole, many noted that both the “Sour Prom” photos and the cover art for “Live Through This” were likely inspired by the 1976 horror classic “Carrie.” Rodrigo had previously shared a still from the film on her Instagram story along with prom scenes from other films and television shows, suggesting that they had all in some way influenced her latest project.

In a 2019 interview with AnOther Magazine, Hole’s photographer Ellen von Unwerth said that Love and the rest of the band had the idea of re-enacting a scene from “Carrie” for the cover art. In several comments on Facebook over the weekend, however, Love shot down the idea that Hole had taken from the film.

“And just to clarify? The Brian de Palma classic ‘Carrie’ is another thing,” she wrote. “My cover was my original idea. A thing you maybe have to actually live life to acquire? I don’t know.”

See what others are saying: (Huff Post) (Billboard) (Pitchfork)