Dispo Moves on Without David Dorbrik

The social media startup Dispo is catching new attention after confirming Tuesday that it closed a Series A funding round with prominent investors.

Dispo essentially mimics a disposable camera, though it forces users to wait to see their photos until 9 a.m. the following morning. After the pictures appear in the app, Dispo users can choose to post them to a solo or shared “roll” with friends, or they can just keep them in their personal library.

His departure came amid widespread criticism over his past content, with outrage reaching a tipping point when a woman came forward to Insider claiming she was raped by a member of Dobrik’s Vlog squad during a night of filming for Dobrik’s channel in 2018.

After that news broke, Dobrik lost a ton of sponsors and supporters. Major investors in his app, like Spark Capital, then cut all ties with it. Meanwhile, others, like Seven Seven Six, distanced themselves from the YouTuber but continued to back Dispo.

Now, it’s clear that Dispo could successfully move forward without Dobrik, who some reports said played more of a marketing figure role during his time at the company.

Dispo’s co-founder and CEO Daniel Liss told Tubefiler they could not comment on the size of this Series A funding round.

An Axios report about the funding round from February said Dispo raised $20 million, giving the startup a valuation of $200 million.

It’s unclear how accurate that is because that report came before all the controversy and before Spark Capital cut ties, which was likely a huge loss since it reportedly led the funding round.

Still, a new report from Axios has stood by that $20 million figure.

In Dispo’s statement about the funding, which is titled Dispo 2.0, Liss made it a point to highlight how hard the team behind the app has worked.

“Now more than ever our team is unified, motivated, and filled with a renewed sense of purpose,” he wrote. “They’ve poured their hearts and souls into this codebase. And the product they created is magical.“

See what others are saying: (Tubefilter) (Tech Crunch) (Fast Company) 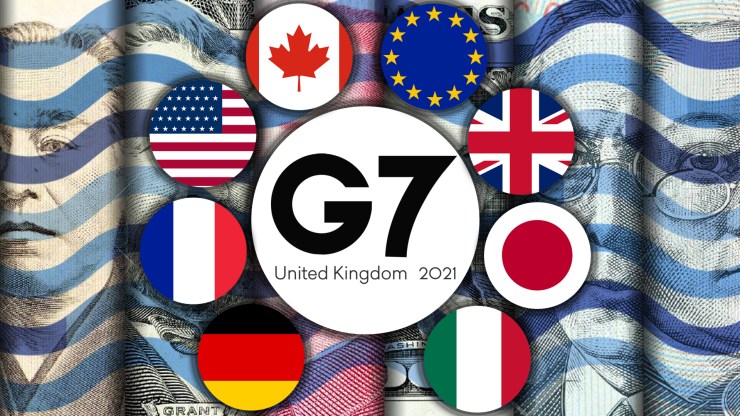 The leaders are hoping to prevent companies from moving their headquarters to countries with lower tax rates, but their plan will likely face substantial hurdles both internationally and from the U.S. Congress.

President Joe Biden and other G7 leaders announced on Friday that they are endorsing a global minimum corporate tax rate of 15%.

Their plan seeks to effectively end company strategies of moving headquarters to countries with cheaper tax rates, even if most of their business is located elsewhere. Coupled with the tax minimum, the leaders have also announced a tax plan that links companies to where they do business rather than where they are headquartered.

Should it become widely adopted, the plan could prove to be a significant threat to the so-called tax-cutting “arms race,” where countries push for lower and lower corporate tax rates to attract businesses; however, the plan will undoubtedly face challenges of its own. For example, Ireland — a country with a 12.5% corporate tax rate — has said such a policy would be detrimental to its economic success.

The Wall Street Journal has also reported that China is unlikely to support the plan, though it noted that such support isn’t completely off the table. While China already has a higher corporate tax rate of 25%, its special administrative region of Macau has a noticeably lower rate of 12%.

Even England itself, which is backing the global tax rate, is looking to exclude London’s financial services companies from the overhaul.

As the White House noted in a press release, “This U.S. priority is a critical step towards ending the decades-long race to the bottom that pushes nations to compete over who can offer the lowest tax rate to large corporations at the expense of protecting workers, investing in infrastructure, and growing the middle class.”

The G7, or Group of Seven, is an informal alliance between many of the world’s top economies, composed of the United States, Japan, Germany, France, the United Kingdom, Italy, and Canada. Leaders for each met in person Friday to discuss not only the global tax rate but also issues such as coronavirus aid, climate change, and cybersecurity.

Following this weekend’s summit, the G7 hopes to push its global tax minimum before the G20, which is composed of 19 countries and the European Union.

While only an endorsement, any official implementation of a global tax rate in the U.S. would require congressional approval.

That could prove difficult considering people like Sen. Pat Toomey (R-Pa.) have called the plan “crazy.”

“Certainly the whole fact that they had to try to persuade all these other countries to make sure they raise their taxes is a confession of the damage we’re doing to our own country,” Toomey added. “They certainly wouldn’t have the votes to approve a treaty of this kind that they’re contemplating.”

Biden’s plan to raise domestic corporate tax rates from 21% to 28% has also faced major opposition from Republican lawmakers. This week, the president indicated that he would be willing to decouple the tax hike from his infrastructure plan, but talks with Republicans have since fallen through.

See what others are saying: (CNBC) (Fox Business) (The Guardian) 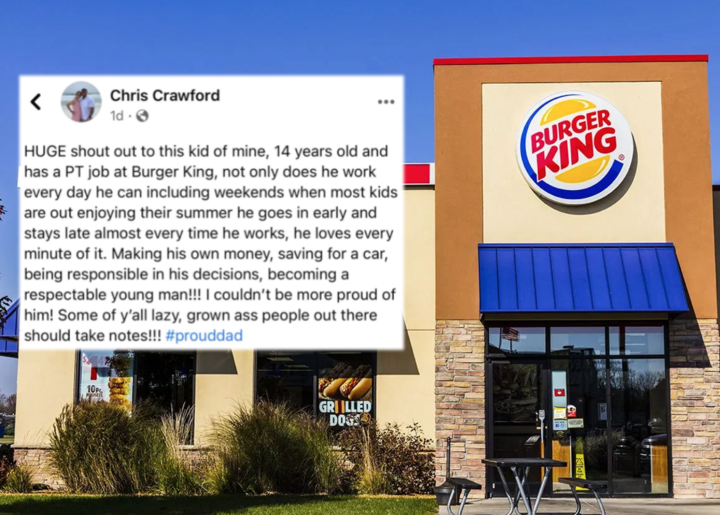 Many Twitter users said kids should enjoy childhood since they have their entire adult lives to work, while others argued that working young teaches beneficial life skills.

A father’s Facebook post celebrating his 14-year-old son for working every day at Burger King has triggered a heated debate regarding children in the workforce.

The post in question, written by a man named Chris Crawford, featured two images of his son in his uniform.

“Not only does he work every day he can, including weekends when most kids are out enjoying their summer, he goes in early and stays late almost every time he works, he loves every minute of it,” the father continued.

“Making his own money, saving for a car, being responsible in his decisions, becoming a respectable young man!!! I couldn’t be more proud of him! Some of y’all lazy, grown ass people out there should take notes !!! #prouddad,” he concluded.

Users Speak Out Against Working at a Young Age

Many were quick to agree with that Twitter user, accusing the father and others like him of romanticizing exploitation and advocating for child labor.

Another user wrote, “Capitalism has literally brainwashed people to think this is a heartwarming story.”

Meanwhile, others noted that there is more to life than work and said kids should be enjoying their childhood because they have the rest of their adult lives to have jobs.

my kid has no friends, social life or hobbies, take notes grown adults!

Many even shared regrets they have about working from a young age because of all the experiences they missed out on. One person said, “All I got from it was an unhealthy relationship with work that I carry to this day.“

I was encouraged both by management and by my parents to overwork myself. I think it was seen as “learning work ethic”. All I got from it was an unhealthy relationship with work that I carry to this day. This post makes my stomach ache. That kid should enjoy youth, not work.

Others Show Support for Working as a Teen

However, not everyone was outraged by the young teen working.

In fact, others applauded the child for having a “go-getter attitude,” arguing that he is setting himself up for bigger and better opportunities in the future by gaining good experience at a young age.

Some even said that working young helps teach money management, people skills, self-sufficiency, and more beneficial life tools, though many have pushed back that there are other ways to teach such skills.

I started working for my own money at age 12, and I agree that making your own money teaches you money management, standing up for yourself, motivation, people skills. My mom didn’t buy me anything because we were so poor. If my mom could have bought me clothes she would have.

Same!! I was forced to start working at 16 and i was mad about it back then, but tbh it gave a lot of time to build up my resume, and a sense of how money works and made me more self sufficient at a younger age! And by the age of 23 was able to get a better job bc of prior 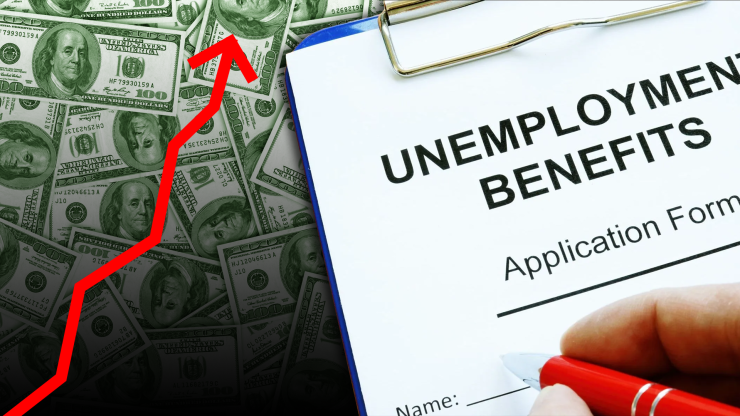 The Federal Reserve believes the Consumer Price Index hike is only temporary and related to unique factors brought about by the pandemic.

CPI on the Rise

While the past week marked the sixth straight round of pandemic-era lows for the number of initial unemployment claims, additional data shows that prices on the consumer side are climbing at their fastest rate since the summer of 2008.

Year over year, the Consumer Price Index rose 5% in May. The core CPI, which excludes volatile food and energy costs, also rose at its fastest rate since 1992, jumping 3.8%.

Just looking at the numbers and nothing else, that could be pretty concerning given the fact that last month beat out 13 years worth of data tracking back to just before the U.S. was hit by the 2008 financial crisis.

But the Federal Reserve doesn’t seem all that concerned. In fact, it believes the CPI jump is based on mainly temporary factors related to the pandemic. That includes supply bottlenecks and other shortages brought by the reopening of the economy.

Economists have also noted that year over year values are currently stilted since so much of the economy was shut down this time last year. By comparison, that yields a large and alarming figure if looked at without context.

Because of that, the Fed said prices will likely come down as the year continues.

Still, that explanation hasn’t completely shaken fears that a high CPI could potentially cause long-term damage if it fails to subside.

“The stakes are high on both Wall Street and Main Street,” The New York Times reporter Jeanna Smialek said in a Thursday article. “Inflation can erode purchasing power if wages do not keep up. A short-lived burst would be unlikely to cause lasting damage, but an entrenched one could force the Fed to cut its support for the economy, potentially tanking stocks and risking a fresh recession.”

Initial unemployment claims fell to yet another pandemic low, this time dropping to 376,000.

Meanwhile, continuing claims dipped as well, falling from 3.65 million the previous week to 3.5 million this past week.

Despite the U.S. currently experiencing an ongoing labor shortage, multiple weeks of continuing declines indicate that the job market is gradually working its way back down to pre-pandemic levels of around 200,000 claims a week.

See what others are saying: (Business Insider) (The New York Times) (CNBC)