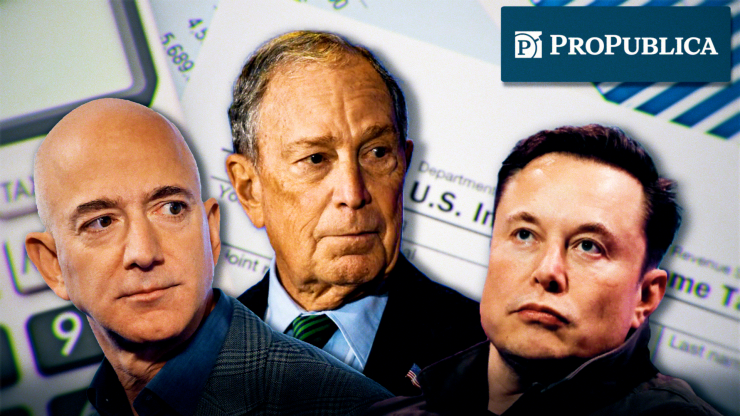 Amazon CEO Jeff Bezos, Tesla CEO Elon Musk, and former New York City Mayor Mike Bloomberg are all among the list of billionaires who have avoided paying any federal taxes for certain years, according to the outlet.

How Little the Top 25 Actually Pay

The report details just how little they’ve paid in federal taxes and how they have managed to do so.

Meanwhile, the outlet reported that Bloomberg, a former mayor of New York City, has paid a “true tax rate” of only 1.30% compared to his wealth growth. Even slimmer than that, Amazon CEO Bezos clocked in at 0.98% and business magnate Buffet paid an ultralow 0.10%.

Like Musk, several of those billionaires have also managed to avoid paying anything in federal taxes for certain years. For example, in 2007 and 2011, Bezos paid nothing. Neither has Bloomberg in recent years.

“Taken together, it demolishes the cornerstone myth of the American tax system: that everyone pays their fair share and the richest Americans pay the most,” the reporters behind the ProPublica article said. “The IRS records show that the wealthiest can — perfectly legally — pay income taxes that are only a tiny fraction of the hundreds of millions, if not billions, their fortunes grow each year.”

It’s no secret that there’s a staggering divide between the country’s richest and the median American household, which earns around just $70,000 in wages a year and pays 14% in federal taxes, but ProPublica’s findings demonstrate just how extensive it can be.

By the end of 2018, the top 25 were worth $1.1 trillion. Notably, it takes the wages of 14.3 million ordinary American workers to equal that same amount, yet the top 25 only paid a total of $1.9 billion in federal taxes that year, while the ordinary workers paid $143 billion.

How Billionaires are Avoiding Federal Taxes

As ProPublica reports, the key to how these billionaires pay so little lies in the difference between wages and total income.

For example, wages are a part of income, but just one part. Stocks, bonds, and other investments are also included in total income but are taxed at lower rates.

That’s how people like Bezos can become the richest person in the world while still only receiving a salary of $80,000 a year from Amazon. In fact, in 2018, the top 25 wealthiest Americans reported $158 million in wages, but that was just 1.1% of their total reported income.

Instead, these billionaires retain their wealth by holding shares of companies they own. Two economists from the University of California, Berkeley have estimated that U.S. billionaires are sitting on $2.7 trillion in unrealized gains.

Still, that begs the question: How do these billionaires actually spend money if they’re earning small salaries and hoarding massive amounts in the stock market?

According to ProPublica, the answer lies in loans.

“The tax math provides a clear incentive for this,” reporters for the outlet said. “Take out a loan, and these days you’ll pay a single-digit interest rate and no tax; since loans must be paid back, the IRS doesn’t consider them income. Banks typically require collateral, but the wealthy have plenty of that.”

Further, those billionaires can often deduct the interest they’ve paid on loans from their taxes.

As ProPublica noted, the publishing of this tax information hasn’t been without pushback.

When the outlet asked billionaire Carl Icahn whether it was appropriate that he hadn’t paid any income tax in certain years, he responded, “There’s a reason it’s called income tax. The reason is if, if you’re a poor person, a rich person, if you are Apple — if you have no income, you don’t pay taxes. Do you think a rich person should pay taxes no matter what? I don’t think it’s germane. How can you ask me that question?”

Meanwhile, a spokesperson for Bloomberg said he “pays the maximum tax rate on all federal, state, local and international taxable income as prescribed by law. Taken together, what Mike gives to charity and pays in taxes amounts to approximately 75% of his annual income.”

“The release of a private citizen’s tax returns should raise real privacy concerns regardless of political affiliation or views on tax policy…” the spokesperson added. “We intend to use all legal means at our disposal to determine which individual or government entity leaked these and ensure that they are held responsible.”

While ProPublica didn’t reveal its source, it did say that it believes “the public interest in knowing this information at this pivotal moment outweighs that legitimate concern.”

See what others are saying: (The Washington Post) (Chicago Tribune) (Associated Press)

“Cyberpunk 2077” Leaks Surface, Including Buggy Gag Reel Made by Devs