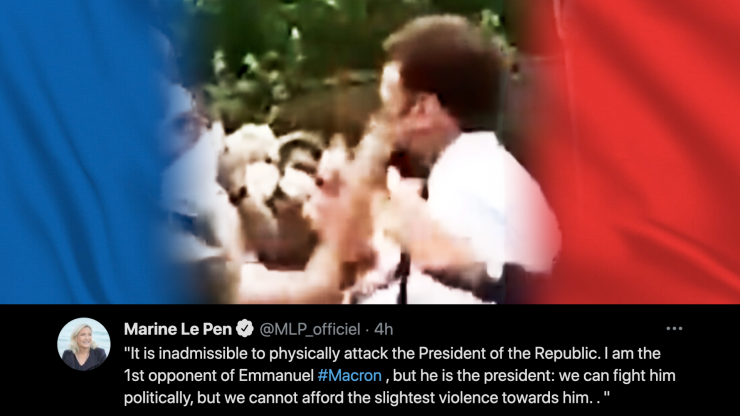 The alleged perpetrator yelled a monarchy-era battle cry when slapping President Macron, who quickly shrugged off the attack to continue speaking with bystanders.

French President Emmanuel Macron was slapped in the face while on tour in the southeast of France Tuesday morning.

During an impromptu meet and greet in the town of Tain-l’Hermitage, he grasped arms with someone in the crowd who then slapped him in the face. During the incident, the unnamed 28-year-old yelled for the end of “Macronie,” a dismissive name of Macron’s politics.

He also yelled “Montjoie, Saint Denis!” — a battle cry of the Capetian dynasty that became somewhat of a meme after it was featured in a comedy film from 1993. It’s unclear if he was trying to send a political message with that statement or if he was memeing.

Macron was quick to shrug off the incident, saying that it was an “isolated incident” that should be ‘put into perspective.” After it happened, he continued talking and meeting the crowd, later telling Le Dauphine, “The overwhelming majority of French people are interested in substantive issues.”

He added that a minority of “ultraviolent individuals” should not “take possession of the public debate.”

Macron’s security managed to arrest the man, along with a friend accompanying him after the incident. He’s being held for allegedly using violence against a person holding public authority and faces a minimum €750 fine if found guilty.

Because of Macrons’ position, French legal scholars argue that it’s possible he could face a much harsher €45,000 fine. However, a prosecutor may not pursue the stiffer charges because they require Macron to actually be injured, which he was not.

Despite France’s fractured political scene, Tuesday’s incident caused French politicians from across the spectrum to come together. French Prime Minister Jean Castex, an ally of Macron, told the National Assembly, “Politics can never be about violence, verbal aggression, and even less about physical aggression. I call for a republican awakening, we are all concerned, the foundations of our democracy are at stake.”

Far-right leader Marine Le Pen, Macron’s biggest opponent, condemned the incident, writing on Twitter, “I say this with absolute firmness; it is unacceptable to physically attack the president of the republic or political representatives but especially the president.“

“I am Emmanuel Macron’s main rival, but he is the president of the republic and as such, we can beat him politically, but we cannot accept the slightest violence towards him. I consider this behavior unacceptable and deeply deplorable in a democracy.”

While the former socialist president Francois Hollande tweeted, “Attacking the president of the republic is an unacceptable and intolerable blow to our institutions. In the face of this indescribable act, the whole nation must show solidarity with the head of state. In these circumstances, I send my full support to @EmmanuelMacron.”

Macron has been on a tour of France to get a pulse on the country just as it begins to reopen. Just before getting slapped, Macron had tweeted out that life would “resume in all of our territories!”

Starting Wednesday, curfews will be extended to 11 p.m. and indoor dining will be permitted.

See what others are saying: (BBC) (Reuters) (Washington Post)