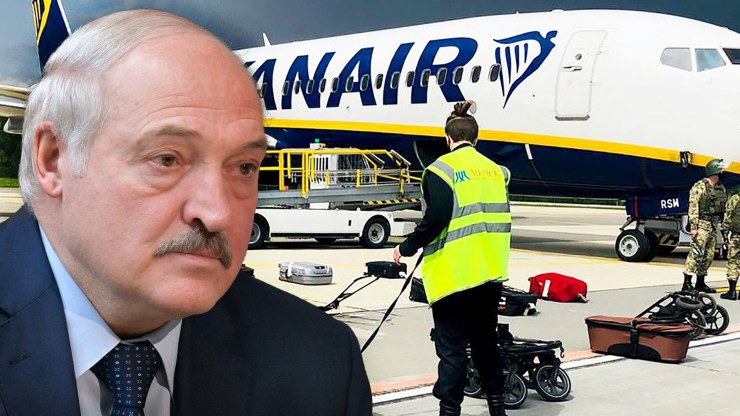 The government of Aleksandr Lukashenko claims someone called a bomb threat on the flight, although the charade was used to arrest opposition journalist Roman Protasevich

Belarus has been accused of state-sponsored terrorism after it forced Ryanair flight 4978 to land Sunday in order to arrest a journalist on board.

Belarus; however, tells the story differently.

According to its Interior Ministry, a bomb threat was called in about the flight from Greece to Lithuania. While over Belarusian airspace, the flight got a call from air traffic control saying that it had to land in Minsk. Reportedly, President Aleksandr Lukashenko personally ordered a MiG-29 fighter plane to escort the flight all the way.

After landing, no bombs were found on the plane, but Belarusian journalist Roman Protasevich was on board. Protasevich is a co-founder of the NEXTA telegram channel, which is one of the few remaining free-press outlets remaining in Belarus following a severe crackdown on the press in 2020. When he realized the plane was being forced to land, France24 reports that Protasevich told other passengers that “he was facing the death penalty.”

After seven hours on the tarmac, the plane took off again to Lithuania with everyone but Protasevich on board. Belarus maintains that the plane was not forced to land because Protasevich was on board, and the country’s top investigative body claims it’s taking the false-bomb report very seriously by vowing to investigate who made the outrageous threat.

Few believe the bomb threat story, finding it too convenient that the flight just so happened to be the flight of one of Lukashenko’s biggest critics onboard.

When his arrest became known, NEXTA’s leadership removed all of Protasevich’s NEXTA Telegram privileges to ensure the safety of its 250,000 members.

Around the world, leaders condemned the act. Speaking about the incident, U.S. Secretary of State Antony Blinken said, “We strongly condemn the Lukashenko regime’s brazen and shocking act to divert a commercial flight and arrest a journalist. We demand an international investigation and are coordinating with our partners on next steps.”

Still, it’s unclear what those consequences can be. Belarus is not part of the E.U., meaning the bloc can’t impose internal restrictions. For international pressure, Belarus’ top leaders and institutions are already under crippling sanctions over how it cracked down on opposition figures in a hotly contested presidential election last year.

Some of the most critical reactions came from the Baltic countries, with Lithuania’s President demanding that Belarus’ airspace be declared unsafe and the Belarusian aircraft not be accepted at E.U. airports.

However, in places like Russia, Lukashenko’s actions were met with praise. Margarita Simonyan, editor of the RT propaganda television network, said the Belarusian president “played it beautifully.”

While countries decide what to do, some airlines have already taken matters into their own hands. Some carriers, like airBaltic, told its captains to “avoid entering Belarus airspace until the situation becomes clearer or a decision is issued by the authorities.” Carriers like Wizz air have made similar plans until more guidance is given.

See what others are saying: (Washington Post) (CNN) (The Guardian)

Violence Erupts at Al-Aqsa Mosque One Day After Ceasefire