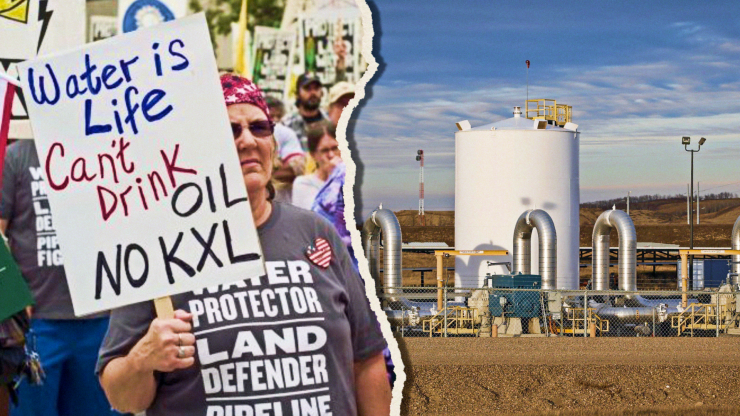 The decision ends a decade-long fight over the project, which came to signify the debate over fossil fuels and climate change in America.

The company behind the highly controversial Keystone XL pipeline officially ended the project Wednesday after a decade of political battles.

The $8 billion pipeline, which was first announced in 2008 by the Canadian firm TC Energy, would have carried oil from the tar sands in Alberta, Canada to the Gulf Coast.

The coalition of environmentalists, Indigenous tribes, scientists, and others who lobbied against the project opposed it because the oil sands crude it would carry requires more processing than other kinds of oil, so production would cause more greenhouse gas emissions.

The project quickly became the centerpiece in the debate over fossil fuels and climate change, changing public opinion and spurring other efforts to stop separate pipeline projects in multiple states.

As a result, in 2015, then-President Barack Obama announced that his administration would reject the construction permit for the Keystone pipeline.

The project moved forward until 2018, when a federal judge blocked construction in the U.S. on the grounds that Trump had not done a proper environmental review before rescinding Obama’s policy.

After years of legal back and forth, the Supreme Court upheld the lower courts’ decision, and TC Energy said it would reassess the project’s future on American soil while still proceeding in Canada.

The final nail in the coffin, however, came on President Joe Biden’s first day in office, when he again revoked the permit for the project.

The same day, TC Energy said it said it would be suspending work. The project remained in limbo until Wednesday, when the company officially announced it was abandoning the project, saying in a statement that it will “continue to coordinate with regulators, stakeholders and Indigenous groups to meet its environmental and regulatory commitments and ensure a safe termination of and exit from the project.”

Many of the groups that fought against the pipeline cheered the announcement as a groundbreaking victory.

“On behalf of our Ponca Nation we welcome this long overdue news and thank all who worked so tirelessly to educate and fight to prevent this from coming to fruition,” said Larry Wright Jr., the chairman of the Ponca Tribe of Nebraska. “It’s a great day for Mother Earth.”

Republican lawmakers and oil industry officials condemned the move, arguing it would cost America thousands of construction jobs, though experts have noted the jobs would have been temporary.

“It’s unfortunate that political obstructionism led to the termination of the Keystone XL Pipeline,” said Robin Rorick, the vice president of midstream and industry operations at the American Petroleum Institute. “This is a blow to U.S. energy security and a blow to the thousands of good-paying union jobs this project would have supported.”

Others also took aim at Biden specifically, including Sen. John Barrasso (R-Wy.), the ranking Republican on the Senate Energy Committee.

“President Biden killed the Keystone XL pipeline and with it, thousands of good-paying American jobs,” he said Wednesday.

While Biden’s undeniable role in the fate of the Keystone pipeline will certainly give him traction with environmental groups, his administration now faces pressure to end other pipeline projects.

Many have already begun to demand he rescind permits for the highly controversial Dakota Access pipeline, as well as the Line 3 pipeline in Minnesota, which attracted hundreds of protesters earlier this week.

“The termination of this zombie pipeline sets precedent for President Biden and polluters to stop Line 3, Dakota Access, and all fossil fuel projects,” Kendall Mackey, a campaign manager for the advocacy 350.org said in a statement. “This victory puts polluters and their financiers on notice: Terminate your fossil fuel projects now — or a relentless mass movement will stop them for you.” The nurse touted false claims while speaking before Ohio lawmakers in an effort to push for the passage of a GOP-sponsored House bill that addresses civil liberties around vaccines.

Video has gone viral of an anti-vax nurse in Ohio trying to prove to state lawmakers on Tuesday that COVID-19 vaccines make people magnetic.

Spoiler alert. It did not go well.

The nurse, Joanna Overholt, was speaking at a hearing to push for the passage of GOP-sponsored House Bill 248, which addresses civil liberties around vaccines. It would do things like bar vaccinations from being mandatory, stop businesses from denying unvaccinated people service, and outlaw obligations to disclose one’s vaccination status.

“I just found out something when I was on lunch and I wanted to show it to you,” Overholt said in the clip. “We were talking about Dr. Tenpenny’s testimony about magnetic vaccine crystals. So this is what I found out. So I have a key and a bobby pin here.”

“Explain to me why the key sticks to me. It sticks to my neck too,” she claimed while fumbling to keep the key in place before it fell from her neck when she took her hand off of it.

“So yeah, if somebody could explain this, that would be great. Any questions?”

Social media users were definitely left with questions, though many centered around why and how a nurse could spread such a ridiculous theory.

“I’m sure you’ve seen the pictures all over the internet of people who’ve had these shots and now they’re magnetized,” Tenpenny said earlier. “They can put a key on their forehead. It sticks. They can put spoons and forks all over them and they can stick.”

Testimony going off the rails now.

Tenpenny is claiming there is metal in the vaccine that causes forks to stick to your forehead. She saw videos of it on the internet, you see

However, it should be known that Tenpenny has been cited by the nonprofit Center for Countering Digital Hate as a member of the “Disinformation Dozen,” a group of 12 people responsible for 65% of anti-vaccine misinformation shared on the Internet.

As many have pointed out, these two trained medical professionals seem to be ignoring any other more logical explanation for why someone could manage to make these objects stick to them, including sweat and the natural secretes of a substance called sebum, aside from those who could also be using glue for their misleading social media posts.

From the look of it, most people online seem to be mocking these two so-called medical professionals. In fact, some even joked that the magnetization theory might have just encouraged more people to get vaccinated.

See what others are saying: (HuffPost) (The Independent) (The Daily Beast) 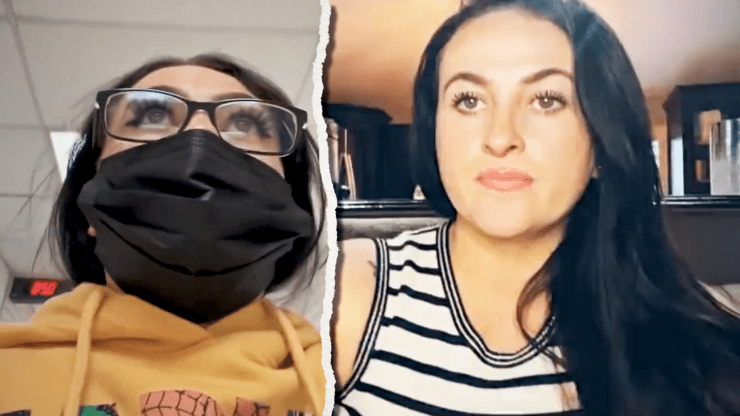 The mother, who is now facing charges for the stunt, claimed she was trying to show how vulnerable students and staff are against threats of violence.

The 30-year-old parent recorded herself doing so and posted it on YouTube, showing herself making it through class after class and even greeting the school’s principal at one point. Garcia shared a clip of that YouTube video on TikTok, which went viral and showed her eating lunch at the school without issue.

By Friday, reports emerged saying Garcia had actually been arrested for the stunt. Video she shared of her arrest showed officers responding to her home for an unrelated traffic warrant.  She was ultimately charged with criminal trespassing and tampering with government records. She released on a bond of nearly $8,000.

Mother Says She Was Proving a Point About Safety

In a second YouTube video shared before her arrest, Garcia described her reasoning for what she did, arguing that she wasn’t looking to gain fame or cause issues. She also explained how she was ultimately caught when her daughter’s last teacher of the day asked her to stay after class.

When the confused teacher asked why Garcia has disguised herself as her 13-year-old, Garcia replied, “for a social experiment. I wanted to see if I could make it the entire day without anybody noticing. And I’d say up until 7th period, I think that’s a very long day for a 30-year-old.“

In her video, she went on to stress that she was only trying to prove a point and show how vulnerable students and staff are against threats of violence.

She claims she understands why people might think what she did was weird but added, “Are you more concerned that I, a parent, was sitting next to your child or do we really want to wait for the next person taking their second amendment right to the extreme?”

“I’m proving a point that this is with all school systems. Private school, public school. It doesn’t matter. We have a problem,” she continued. “There have been one too many mass shootings. Elementary schools, colleges, high schools. That is disgusting to think of, that this could have been prevented just by putting metal detectors and more security.”

So far, reactions to her stunt have been fairly mixed, with some slamming her behavior and others applauding her for highlighting a problem.

While the school hasn’t commented much about the incident, after Garcia’s arrest, the district’s superintendent did tell local reporters that it would review and evaluate its security measures. That official also encouraged parents to look into more volunteer opportunities and asked anyone with concerns to call her office.

See what others are saying: (The Washington Post) (El Paso Times) (Fox News)