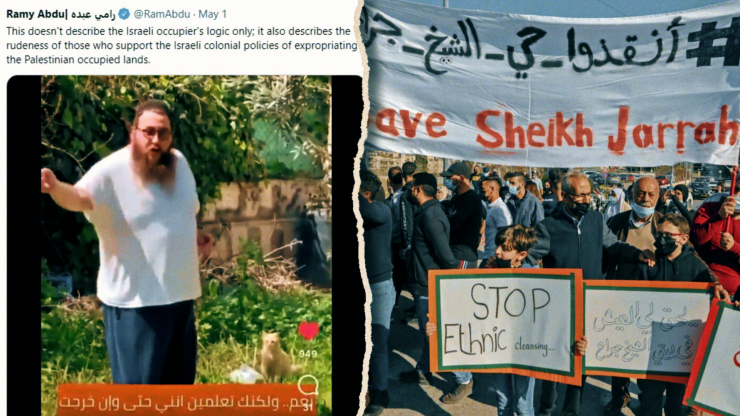 A video depicting an Israeli settler arguing with a Palestinian homeowner about “stealing” her home has sparked widespread outrage after it began circulating over the weekend.

Shortly thereafter, Jordan lost its mandate to the region and it came under the sole control of Israel, which has refused to recognize the deal. In March 2020, a court ordered Palestinian families in the neighborhood to vacate their homes after claiming they were built on land owned by Israelis prior to 1948, after which the homes would be then occupied by Israelis. Still, it doesn’t seem that many Israeli settlers needed a court order to begin the process, as the neighborhood has been dealing with Israelis squatting in Palestinian homes for over a decade.

As could be expected of any decision ordering people out of their homes, it was met with hostility and many Palestinians have refused to comply, leading to large sit-ins and protests. As recently as this week, Israeli forces have stormed the neighborhood to break them up and force families out of their homes to comply with the court’s decision.

“If I don’t steal it, someone else will steal it”

This was the backdrop for this weekend’s viral video, which showed an unknown Israeli settler with a thick Bronx accent arguing with Mona Al-Kurd about stealing her home. He was in her garden when Al-Kurd confronted the man, saying “Jacob, you know that this is not your home.”

Jacob, as the man seems to be named, responded, “Yes, but if I go, you don’t go back, so what’s the problem? Why are you yelling at me?”

“You are stealing my house!” Mona could be heard saying, growing increasingly frustrated with the situation.

The back and forth continued with Jacob flatly stating, “If I don’t steal it, someone else will steal it, So why are you yelling at me?”

“No one is allowed to steal my home!”

Al-Kurd and her family have actually only had access to one-half of their house. The other half has been squatted by dozens of settlers since 2009 and she has no recourse to force them out.

A Solution No One Likes

The Israeli Supreme Court has attempted to find a solution to the situation, although it’s one that has left many Palestinians feeling more upset. It gave Palestinian families until Thursday to recognize new Israeli settlers as landlords and pay them rent, or it will look at the 2020 case’s appeal and possibly hand down similar evictions.

Sheikh Jarrah is just the latest flashpoint for tensions between Israelis and Palestinians as the last year has seen Israeli settlement efforts in the West Bank and other Palestinian neighborhoods dramatically increase with seeming support from the Israeli government.

See what others are saying: (The Jerusalem Post) (Al Bawaba) (Al Jazeera) 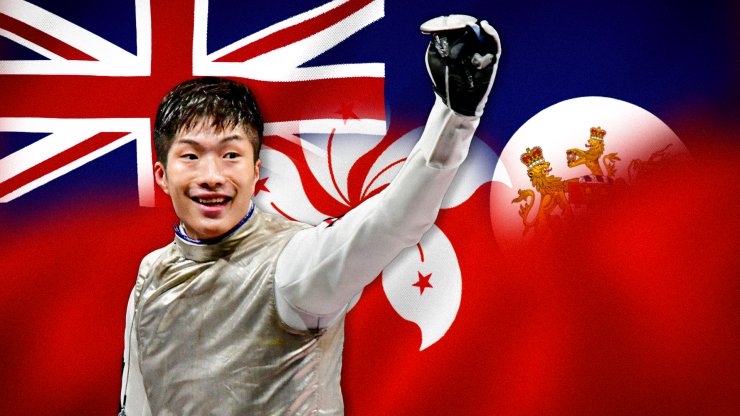 The man’s boos were launched during the first time the Chinese national anthem had ever been played for a Hong Kong athlete at the Olympics.

Hong Kong authorities announced Friday that a man was arrested for allegedly booing and “insulting” the Chinese national anthem while watching the Olympics on Monday.

The unnamed 40-year-old, who identified himself as a journalist, was allegedly watching the Olympics fencing medal ceremony for Hong Konger Edgar Cheung at a local mall. When the anthem began playing, he allegedly began booing and chanted “We are Hong Kong!” while waving a British Hong Kong Colonial flag.

The man’s actions were particularly noteworthy because it was the first time the Chinese national anthem had been played for a Hong Kong athlete in the Olympics. Hong Kongers compete at the Games under a separate committee called Hong Kong, China. The last time a Hong Konger won gold was in 1996 for windsurfing, at which time the British anthem of “God Save the Queen” was played.

Concerns for Freedom of Speech

The man is suspected of breaking the relatively new National Anthem Ordinance, which was passed in June 2020, and has a penalty of up to three years in prison and fines of $6,000 for anyone who publicly and intentionally insults the anthem. The law mirrors one in mainland China, but it has faced considerable scrutiny from increasingly persecuted pro-democracy lawmakers in Hong Kong.

They argue that it tramples the right to free speech, which is supposed to be enshrined in the city’s Basic Law. Hong Kong police, however, say that’s not the case and claim that his actions breach common restraints on freedom of speech. Senior Superintendent Eileen Chung said that his actions were “to stir up the hostility of those on the scene and to politicize the sport.”

Police issued a warning that it would investigate reports of others joining his chants or violating the separate National Security law passed last year.

This incident isn’t the only case of alleged politicization of the Games. Badminton player Angus Ng was accused by a pro-Beijing lawmaker of making a statement by sporting a black jersey with the territory’s emblem. The imagery was very similar to the black-and-white Hong Kong flag used by anti-government protesters.

Ng countered that he wore his own clothes to the event because he didn’t have sponsorships to provide jerseys and he wasn’t authorized to print the emblem on a jersey himself.

See what others are saying: (Inside) (Al Jazeera) (CNN) 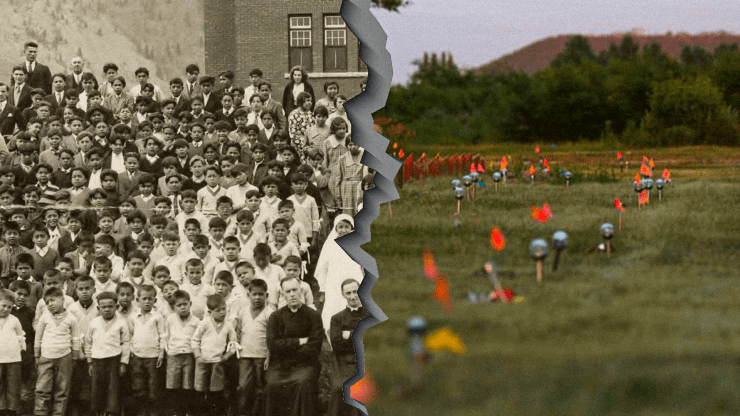 The Roman Catholic Church is facing considerable backlash across Canada for its treatment of indigenous peoples in the residential school system, along with its subsequent efforts to downplay the problem.

Father Rheal Forest was put on forced leave Wednesday following remarks he made over a weeks-long period starting July 10 in which he doubted victims of the country’s infamous residential school system.

Residential schools were a system of schools largely for indigenous children that were mostly run by the Catholic Church with federal government funding. The schools were notoriously cruel and long faced allegations that children had been abused or went missing under their care.

To date, over 1,300 unmarked graves have been found at four former residential schools across Canada, a fraction of the over 130 that used to exist.

Forest, of the St. Boniface archdiocese in Winnipeg, was standing in for a couple of weeks while the main priest at his church was away. During that time, Forest told parishioners that victims of the residential schools, particularly those sexually abused, had lied.

“If [the victims] wanted extra money, from the money that was given to them, they had to lie sometimes — lie that they were abused sexually and, oop, another $50,000,” he said.

In that same sermon, he also added that during his time with Inuit groups in the north of the country, most had allegedly said they appreciated the residential school system. Instead, he said they blamed any abuses on lay people working at the facilities rather than priests or nuns.

Forest’s comments drew a ton of backlash, prompting the archdiocese to place Forest on leave. A spokesperson for the archdiocese said that the institution “completely disavow” Forest’s comments, adding, “We very much regret the pain they may have caused to many people, not least of course Indigenous people and, more specifically, survivors of the Residential School system.”

Overall, the archdiocese has attempted to apologize to indigenous communities for its part in the residential school system, with Archbishop Albert Legatt saying in a video that the way forward was by “acknowledging, apologizing, and acting” on terms set by indigenous groups.

According to documents obtained by CBC News, the Church spent over a decade avoiding paying out money to survivors per a 2005 agreement. At the time, it, alongside the protestant churches that also ran some residential schools, agreed to pay an amount to victims of the schools in the tens of millions.

Instead, according to an internal summary of 2015 court documents, the Catholic Church spent much of that money on lawyers, administration, a private fundraising company, and unapproved loans. It seems that some of this was technically legal, such as a promise to give tens of millions back via “in-kind” services; however, there was no audit completed to confirm that these services actually happened or to prove the alleged value of the services. This led to doubts about whether or not they were done effectively.

The Catholic Church was unique among the signatory churches in the 2005 agreement with its efforts to avoid paying victims. All of the other denominations paid out their sums many years before without issues.

While priests such as Father Forest have supported the Church, there has been internal backlash. Father André Poilièvre, a Saskatoon priest and Order of Canada recipient, said the Church’s actions are “scandalous” and “really shameful,” adding, “It was a loophole. It might be legal, but it’s not ethical.”

With these latest revelations, widespread anger at the Church has triggered allegations that indigenous groups are behind a spree of church burnings across the country.

The entire situation is likely going to continue to smolder as a government commission set up to investigate the schools estimates there will be thousands of more unmarked graves found across Canada.

See what others are saying: (CBC News) (The Guardian) (CTV News) 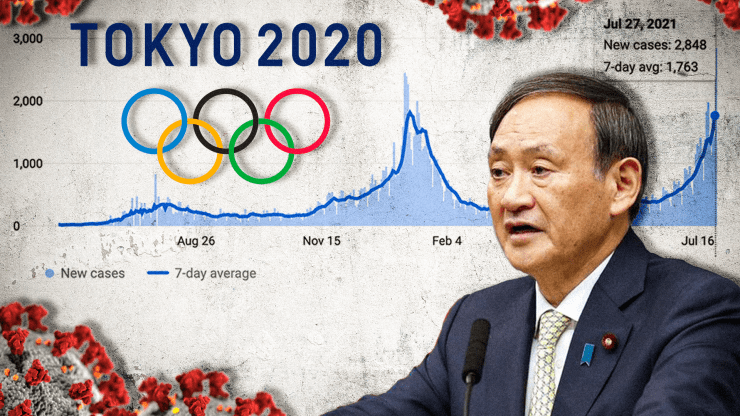 Some positive cases were detected among people attending the Olympic Games, including a handful of athletes.

The Tokyo Olympic Games found itself in more controversy on Wednesday after Tokyo experienced a record number of daily COVID-19 cases for the second day in a row.

On Tuesday, the city recorded 2,848 new cases of the virus, passing the 2,500 daily new case threshold for the first time since the pandemic began. Then on Wednesday, it shattered the record again with 3,177 new COVID-19 cases.

At least 155 of those new cases were detected among people attending the Games, including a handful of athletes, which contrasts Prime Minister Suga Yoshihide’s promise that the Olympics wouldn’t be hit with the virus. The spike in new cases has largely been attributed to the delta-variant, something that many countries are dealing with around the world.

Nishimura Yasutoshi, a Japanese economic minister, told a parliamentary panel this week that COVID-19 cases are expected to continue rising for at least a few days. He also explained that many people may have delayed getting tested last week due to holidays, therefore inflating total daily new case numbers.

Governors in prefectures around Tokyo have moved to ask the government for states-of-emergency, which Tokyo is already under.

The prime minister said in a press conference on Tuesday that “the government has secured a new drug that reduces the risk of serious illness by 70 percent,” adding, “we have confirmed that this drug will be used thoroughly from now on.”

However, he never actually mentioned what drug he was referencing.

“In any case, under these circumstances, I would like to ask the people to avoid going out unnecessarily and to watch the Olympics and Paralympics on TV,” Suga continued.

He also stressed that canceling the Olympics amid the outbreak was completely out of the question, although there have been continued calls from the public and opposition lawmakers for just that.

Beyond refusing to cancel the Games, Suga is facing backlash for refusing to enact strict state-of-emergency protocols. Currently, the measures in Tokyo are almost all voluntary and consist of asking people to stay home, along with requesting restaurants that serve alcohol to completely close and telling all others to shut down by 8 p.m.

See what others are saying: (Reuters) (NPR) (The Wall Street Journal)