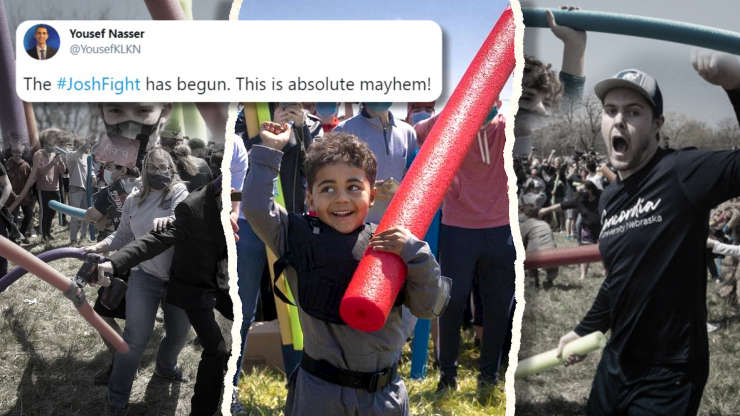 How the “Josh Battle” Formed

A 22-year-old Arizona college student named Josh Swain was experiencing “pandemic boredom” last year and began thinking about how he could never register his own name for social media accounts because it was always taken.

But he had never actually met another Josh Swain before, so he decided to find every person named Josh Swain on Facebook and put them all in a group message.

He then sent them a date, time, and coordinates for a future battle, adding, “whoever wins gets to keep the name, everyone else has to change their name, you have one year to prepare, good luck.”

He tweeted that message out at the time, and it soon went viral. Someone even set up a website to count down to the fight.

As the year went on, the interest in an actual Josh battle continued. The event creator Josh eventually set up a fundraising page that was jokingly titled: “Support Legal Fees to Help Josh Swains Change Their Names.”

That page, however, explained that money was actually going to the Children’s Hospital & Medical Center Foundation, which operates facilities near the designated battleground in Lincoln, Nebraska.

The actual fight date rolled around this weekend, and more than 1,000 people showed up. About 950 were spectators while 50 people named Josh came, according to The New York Times. Of those, only one was named Josh Swain, so the two men with the same exact name engaged in a rock, paper, scissors battle.

The winner, of course, was Josh Swain. (But seriously, the event creator Josh won the battle.)

After that, all the Joshes battled it out with pool noodles.

The fight was pretty playful, with a lot of people humorously collapsing after they were taken down by a four-year-old they affectionately dubbed Little Josh.

Little Josh, whose real name is John Vinson Jr., was ultimately declared the winner of the Josh Fight. He was given a Burger King crown, a championship belt, and a tiny trophy.

When talking to reporters later, his father, Josh Sr., even shared that the boy had actually suffered a series of seizures when he was around 2-years-old and was treated at one of the same children’s hospitals the event was raising money for.

He also told a reporter at the scene that Little Josh would “remember this for the rest of his life.”

The winning Josh Swain has thanked everyone who helped make this event happen and he told The New York Times that he thinks differently of his name now.

“After this, no no no. I am a Josh. I’m not just Josh,” he said. “We’re all proud to be this moniker. And proud to represent it. Now it means something.”

See what others are saying: (The New York Times) (CNN) (Lincoln Journal Star)

Experts Say J&J Shot Is Safer Than Aspirin, but Many Are Still Unwilling To Get It