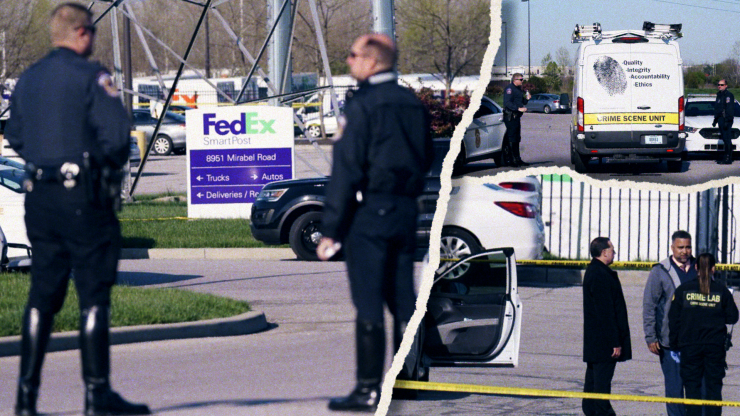 Eight people were killed and several others have been wounded after a gunman opened fire at a FedEx Ground Facility in Indianapolis late Thursday.

The gunman killed four people in the parking lot then four people inside before taking his own life, according to local officials. Authorities have identified the gunman and are searching his home, but have not disclosed any potential motives.

“There was no confrontation with anyone that was there,” Deputy Chief Craig McCartt of the Indianapolis Metropolitan Police Department said during a press conference. “There was no disturbance, there was no argument. He just appeared to randomly start shooting.”

Several witnesses told local outlets they initially thought the gunshots were engines backfiring or another type of mechanical noise until they saw the gunman. Some said they heard him shouting indistinctly before opening fire. The investigation is still in very early stages and victims have not yet been identified.

The facility employs 4,500 team members. It is unclear how many were working at the time of the shooting. FedEx released a statement expressing its condolences to the victims and their families.

“We are deeply shocked and saddened by the loss of our team members following the tragic shooting at our FedEx Ground facility in Indianapolis,” the statement read. “Our most heartfelt sympathies are with all those affected by this senseless act of violence. The safety of our team members is our top priority, and we are fully cooperating with investigating authorities.”

Gun Violence in the U.S.

This tragedy follows a recent string of mass shootings in the U.S., including in Atlanta, Colorado, Southern California, and Texas. According to the Associated Press, this is at least the third in Indianapolis this year.

The Gun Violence Archive has logged a total of 147 mass shootings in the U.S. so far in 2021. The organization defines mass shootings as reported and verified incidents with at least four gunshot victims.

Several politicians have released statements about the shooting, including Vice President Kamala Harris, who said this pattern “must end.”

“Yet again we have families in our country that are grieving the loss of their family members because of gun violence,” she said. “There is no question that this violence must end, and we are thinking of the families that lost their loved ones.”

President Joe Biden also released a statement saying that, “Too many Americans are dying every single day from gun violence. It stains our character and pierces the very soul of our nation.”

“Gun violence is an epidemic in America,” Biden added. “But we should not accept it. We must act.”

“The scourge of gun violence that has killed far too many in our community and in our country,” he said.

“Our prayers are with the families of those whose lives were cut short,” he added on Twitter.

Hogsett is among 150 U.S. mayors who recently signed a letter asking the Senate to take up gun legislation, including expanding background checks.