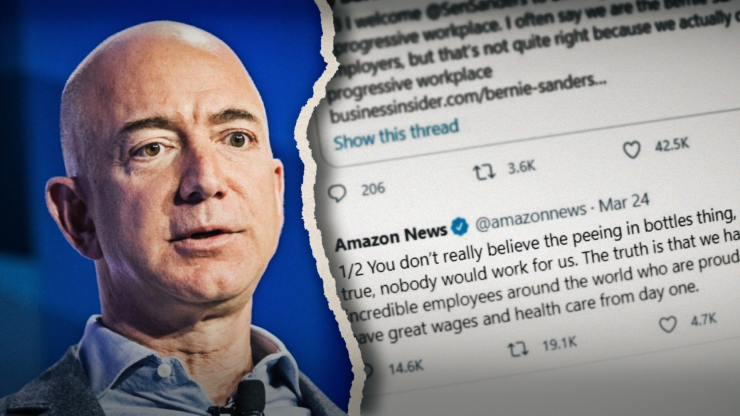 The official Twitter account for Amazon News attracted the internet’s attention last week after it began lobbing snarky replies at Democratic lawmakers. According to a new report from Vox’s Recode, Amazon CEO Jeff Bezos may be to blame.

The report described Bezos as “pissed” and said he “expressed dissatisfaction… that company officials weren’t more aggressive in how they pushed back against criticisms of the company that he and other leaders deem inaccurate or misleading.”

He then reportedly gave a broad mandate to “fight back.”

What Is Bezos Reportedly Upset About?

The Twitter spats with lawmakers began on Wednesday after it was reported that Sen. Bernie Sanders (I-Vt.) was traveling to Alabama to meet with Amazon workers who’ve been pushing to unionize.

In a statement on Twitter, Amazon Consumer Chief Dave Clark said he welcomed Sanders and “appreciate[s] his push for a progressive workplace.”

He also added, “I often say we are the Bernie Sanders of employers, but that’s not quite right because we actually deliver a progressive workplace for our constituents: a $15 minimum wage, health care from day one, career progression, and a safe and inclusive work environment.”

From there, Rep. Mark Pocan (Wi.) jumped into the mix, quote tweeting Clark and saying, “Paying workers $15/hr doesn’t make you a “progressive workplace” when you union-bust & make workers urinate in water bottles.”

Here, Pocan is referring to two things: The first is Amazon’s efforts to keep employees from unionizing by telling them that unions cost too much money and that the company already provides enough benefits for its workers.

The second is a reference from a 2018 report in which British author James Bloodworth, who went undercover at an Amazon warehouse, said he found a bottle of urine on a warehouse shelf. When speaking to Insider, Bloodworth said at the time that workplace culture in the warehouse was like a “prison” and that workers were admonished for taking restroom breaks.

In a reply to Pocan, the account for Amazon News said, “You don’t really believe the peeing in bottles thing, do you? If that were true, nobody would work for us.”

“We hope you can enact policies that get other employers to offer what we already do,” it added.

And yes, I do believe your workers.

Amid the exchanges, Amazon began trending on Twitter, with many people very confused and others outwardly shocked at the tone in Amazon’s tweet.

This is so wild. What brand thinks it’s a smart idea to publicly communicate in such a condescending manner, especially when there’s ample documentation of how little protection you offer your fulfillment center workers? Not doing yourself any favors here…

Eventually, Rep. Alexandria Ocasio-Cortez (NY) added her voice by including a letter from an Amazon manager who noted three separate instances where bags of poop had been found by drivers.

In a reply to a condemnatory thread by Amazon news, Warren accused Amazon of exploiting loopholes to pay lower taxes and vowed to “fight to break up Big Tech so you’re not powerful enough to heckle senators with snotty tweets.”

In a reply, Amazon News accused Warren of trying to break them up “so that they can’t criticize her anymore.”

Amid this “Twitter war,” Amazon workers at a warehouse in Alabama have been voting over the last couple of months on whether or not to unionize.

That vote ends Monday, while counting is expected to begin Tuesday. If the push is successful, it would become the first Amazon warehouse in the U.S. to be represented by a union.

See what others are saying: (Vox) (Yahoo) (Insider)

Krispy Kreme CEO Defends COVID-19 Vaccine Promotion: “If Folks Don’t Want To Visit a Donut Shop, They Don’t Have To”