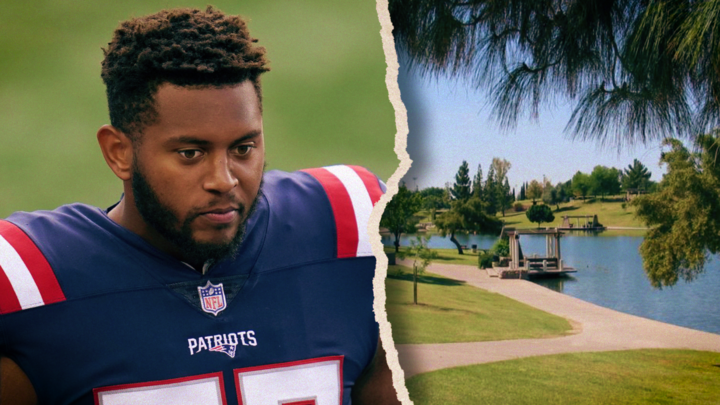 An Offensive Lineman for the New England Patriots is one of two people being praised for helping save a retired Arizona schoolteacher from an attempted sexual assault.

The NFL player, Justin Herron, was walking through Kiwanis park at around 11:00 a.m. on Saturday when he heard screaming.

According to Tempe police officials, 30-year-old Kevin Caballero had just pushed the 71-year-old woman to the ground and was attempting to remove her pants.

That’s when Herron rushed over. “I’m a football player, I’m kind of big. I try not to be too aggressive with people knowing I could potentially hurt somebody,” the 6 foot 5 inches, 304-pound offensive tackler said at a press conference Wednesday.

“My parents always talked to me about it, if there’s someone in need, make sure you can help them and be the best you can be.”

A second Good Samaritan, Murray Rogers, was at the park for his daughters’ birthday party when he also heard yelling. He then ran over to the scene and helped Herron to make sure the attacker did not flee.

“After he got off of her, we looked at each other and said we need to make sure he doesn’t go anywhere,” Rogers said

He also praised the NFL player for removing the victim from the scene as they waited for the police.

Both men expressed shock about how this could happen so openly in board daylight.

“It was 11 a.m., middle of the day, in a very open field and the fact that it happened there at that time was just very shocking. I wish I could tell you what I was thinking, but I could just tell someone needed help. All I could do was rush myself over there to make sure I could help the victim and I could comfort her and be the best person I can be,” Herron said.

“If not for the swift actions of Mr. Justin Herron and Mr. Murry Rogers, this vicious attack could’ve been much worse,” Tempe Police Detective Natalie Barela explained during the press conference.

Both men were also honored with Outstanding Service Awards for their actions.

The men said they privately reunited with the woman they helped prior to the press event. “It was heartwarming to see her, but also gut-wrenching to see how she responded to the trauma and how she’s dealing with it,” Herron explained. “No one should go through that.”

“She thanked us. She called us her angels,” Rogers added. “I’m a little bit of a crier, so it was very emotional.”

Caballero, for his part, has been charged with attempted sexual assault and kidnapping. Police are currently working to see if he is connected to any other attacks.

See what others are saying: (CNN) (People) (NBC News)