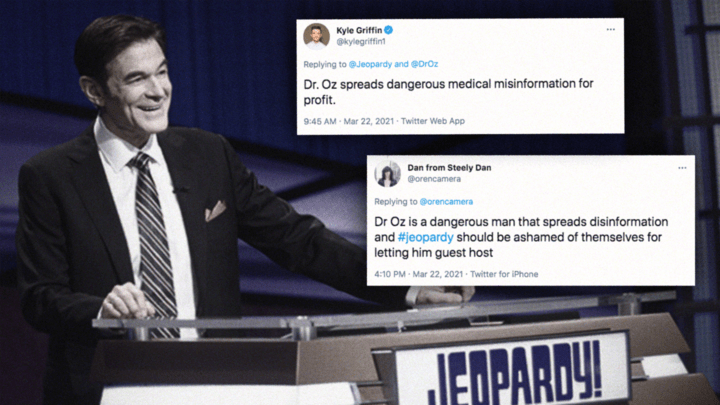 Since the heartbreaking death of longtime “Jeopardy!” host Alex Trebek, many fans have wondered who might be chosen to take his place.

Executives behind the iconic game show eventually decided that celebrities and former champions would be invited to sit in as guest hosts for a limited time.

Outrage Against Dr. Oz as Host

His appearance prompted tons of fans to share their disappointment and outrage, with many people accusing Oz of being a dangerous figure that spreads medical misinformation and questionable treatments for his own profit.

This is not really new criticism. Dr. Oz has been a controversial medical figure for years.

He’s been known to peddle scammy weight loss products and has provided a platform to “debate” the benefits of conversion therapy.

In 2014, a British Medical Journal study declared that about half of his medical advice is “baseless or wrong.” The following year, a group of fellow doctors wrote to Columbia’s dean of medicine to call the school’s partnership with him “unacceptable.”

He even caused controversy last year, when he suggested schools should reopen during the coronavirus pandemic because “only” 2% to 3% more people could die.

Guest Hosts Continue To Cause Controversy

It’s worth noting that Dr. Oz’s time on the show is by no means permanent. He’s also not the only guest host that has sparked some outrage, though the backlash against him has been particularly loud.

Ken Jenning, who holds the record for the longest winning streak on the show, issued an apology last year for a series of past offensive tweets. Reporter Katie Couric recently faced criticism for political comments she made on “Real Time With Bill Maher.”

For now, it seems like the episodes featuring Oz will continue to air a scheduled. It’s certainly no easy task to take over from Alex Trebek, but through these different hosts, fans are hoping one will stand out as a strong replacement.

CEO Bob Chapek said talent is Disney’s “most important asset” and claimed the company is undergoing a “reset” regarding its contracts.

Bob Chapek Says Talent Contracts Are Going Through a Reset

Disney CEO Bob Chapek said Tuesday that going forward, talent contracts at the studio “will have to reflect the fact that the world is changing.”

His remarks come as Disney battles a lawsuit from actress Scarlett Johansson alleging breach of contract for her work on “Black Widow.” While making his claims at a virtual Goldman Sachs conference, Chapek did not mention Johansson by name, but he did directly address the issues Hollywood is facing when it comes to compensating talent amid the pandemic.

As COVID-19 halted filmgoing, many movies expected to be box office hits were instead released directly to streaming, while others were released in theaters and on streaming platforms the same day. These models are drastically different from the exclusive theatrical release that films and the stars in them have come to expect over the last several decades.

“We’re sort of putting a square peg in a round hole right now where we’ve got a deal conceived under a certain set of conditions, that actually results in a movie that is being released in a completely different set of conditions,” Chapek said during the conference via numerous reports. “So there’s a bit of a reset that’s going on right now, and ultimately we’ll think about that as we do our future talent deals and plan for that and make sure that that’s incorporated.”

Chapek also referred to talent as Disney’s “most important asset” and said that historically, the company has had a “very symbiotic” relationship with its talent regarding the deals they strike together.

That symbiotic relationship is now being put to the test by Johanssen, who hit Disney with a lawsuit in July over its decision to release her “Black Widow” standalone picture for a premium fee on Disney+ the same day it hit the big screen. The actress claims that her contract guaranteed an exclusive theatrical release for the film and that her salary was largely based on what it grossed at the box office. Because viewers had the option to purchase it for streaming at home, she claims she did not see “the full benefit” of her deal.

Disney claimed the lawsuit had no merit. It also released a scathing statement saying that Johansson’s legal effort showed a “callous disregard” for the harmful and prolonged effects of COVID-19, especially since she allegedly received $20 million upfront for “Black Widow.”

Disney is hoping to solve the matter via private arbitration. Johannson’s legal team wants to take the dispute to court.

So far, “Black Widow” has raked in $377 million worldwide. It broke pandemic box office records during its opening weekend but still has not made nearly as much as it likely would have prior to the pandemic.

As for whether or not the dual release strategy actually tanked the film’s earnings, that is hard to say. By comparison though, Marvel’s “Shang-Chi,” which was released exclusively in theaters, is already set to catch up to “Black Widow” at the box office. The film has been out for just under a month and has already made $306 million worldwide.

While many expected to see other A-list actors follow Johannson’s lead and likewise file lawsuits against studios who threw their titles on streaming, so far Disney has had seemingly no issue striking more deals with its talent. In the past several months, it has locked in sequels with stars like Emma Stone, Dwayne “The Rock” Johnson, and Emily Blunt.

See what others are saying: (The Wrap) (The Hollywood Reporter) (Los Angeles Times) 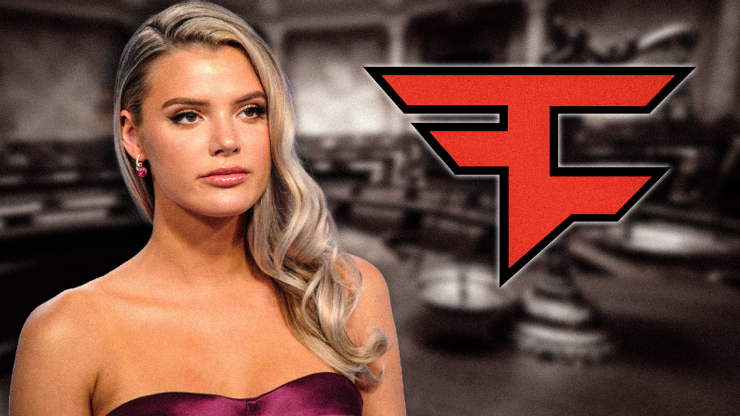 The social media star says she was promised stock in FaZe Clan as part of a previous settlement but has yet to receive her shares.

According to a Monday report from The Washington Post, Butler’s case stems from a previous lawsuit that involved both her and FaZe Clan. The report says that in 2018, Butler transferred her shares in a media company she co-founded called Clout Gang to a different company called Hubrick Limited as part of an agreement with FaZe Clan. At the time, Hubrick and FaZe Clan were partnering to develop both businesses.

Per The Post, several other FaZe Clan members were part of a similar exchange where they transferred their FaZe Clan shares for Hubrick shares as well. The partnership between the two companies crumbled, however, leading to a legal frenzy. Butler, FaZe Clan, Clout Gang, and more ended up accusing Hubrick of fraud in a lawsuit. Hubrick tossed the allegation right back at them in a countersuit.

To resolve the matters, The Post says Butler and FaZe Clan “entered into an oral agreement to settle the lawsuits with Hubrick,” which involved Butler giving up her Hubrick stock and dropping her claims against the company. In return, she would then receive FaZe Clan common stock.

Butler says that despite holding up her end of the bargain, she has still not received stock in FaZe Clan.

Butler has over 10 million followers on Instagram and another 3.7 million subscribers on YouTube. She has had a career in modeling and picked up a handful of acting credits in television shows and music videos. She previously dated the co-owner of FaZe Clan, FaZe Banks.

According to The Post, FaZe Clan is valued at around $300 million.

“If Faze Clan simply abided by its promise to compensate her, Alissa would not have had to sue Faze Clan,” Butler’s attorney, Bryan Freedman, said to The Post.

FaZe Clan defended itself in a statement to the outlet, saying it “denies generally and specifically each and every allegation contained in the Complaint.”

FaZe Clan CEO Lee Trink also sent an email to The Post claiming that the matter will likely be resolved.

“Stories get created out of any disagreement or dispute, big or small,” he wrote. “On this particular matter we’re in close communication and confident it’ll be resolved amicably.”

It is unclear how much Butler is seeking in her suit.

See what others are saying: (The Washington Post )(Dexerto) (Esports.com) 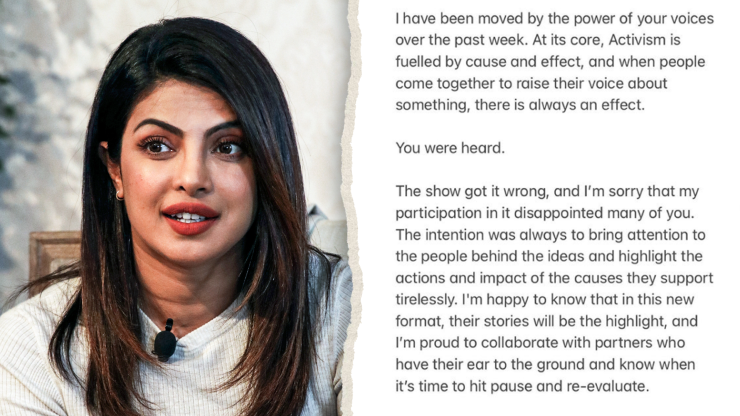 The controversial series is now being reworked into a documentary, which Chopra Jonas hopes will better “highlight the actions and impact” of global activists.

Actress Priyanka Chopra Jonas responded to controversies surrounding “The Activist,” a CBS reality competition series she was slated to co-host that is now being reworked following widespread backlash.

“The Activist” was going to show real activists competing against one another in various challenges in an effort to promote their philanthropic causes. After many expressed disgust at the premise, CBS said it would scrap the footage already shot and turn the idea into a one-time documentary special highlighting the work and impacts of different activists.

“The show got it wrong, and I’m sorry that my participation in it disappointed many of you,” Chopra Jonas wrote on Instagram. “The intention was always to bring attention to the people behind the ideas and highlight the actions and impact of the causes they support tirelessly. I’m happy that in this new format, their stories will be the highlight.”

“I’m proud to collaborate with partners who have their ear to the ground and know when it’s time to hit pause and re-evaluate,” she added.

Chopra Jonas closed her post by thanking the “global community of activists” for their hard work, which often goes unacknowledged.

Musician Usher and dancer Julianne Hough were cast to host alongside Chopra Jonas. After a release announcing the show and their casting went out last week, it was slammed online by activists and journalists alike.

Actress and activist Jameela Jamil wrote that the network would have been better off donating the presumably large production costs to charity instead of “turning activism into a game.”

Women’s activist Gina Martin thought turning charity into a competition was counterintuitive, arguing “the whole *essense* of activism is solidarity and community.”

Writers from The Verge, The Washington Post, Essence, and countless other outlets likewise published pieces slamming the program. The Post’s Michele L. Norris accused CBS of ​“trying to capitalize on the current avalanche of doom in the daily news cycle.”

Norris added that the show’s “prize,” which was to attend the G20 summit in Italy, boiled down to activists fighting “merely for the right to crash an international conference and try to shake down world leaders for cash.”

Responses From Those Involved

Chopra Jonas is not the only host to address the criticism. Before the idea was canned, Hough wrote a lengthy Instagram post saying she was listening to the dialogue regarding the program.

“There is a feeling of insult, dehumanization, insensitivity and hurt that is being rightfully felt,” she wrote.

“I do not claim to be an activist and wholeheartedly agree that the judging aspect of the show missed the mark and furthermore, that I am not qualified to act as a judge,” she added, though she stopped short of actually stepping down from the gig.

CBS ended up releasing a joint statement with Global Citizen and Live Nation acknowledging the failings of the concept.

“It has become apparent the format of the show as announced distracts from the vital work these incredible activists do in their communities every day,” the statement said. “The push for global change is not a competition and requires a global effort.”

The statement said the new documentary will “showcase the tireless work of six activists and the impact they have advocating for causes they deeply believe in” without any competitive element.

See what others are saying: (CNN) (Vanity Fair) (BBC News)