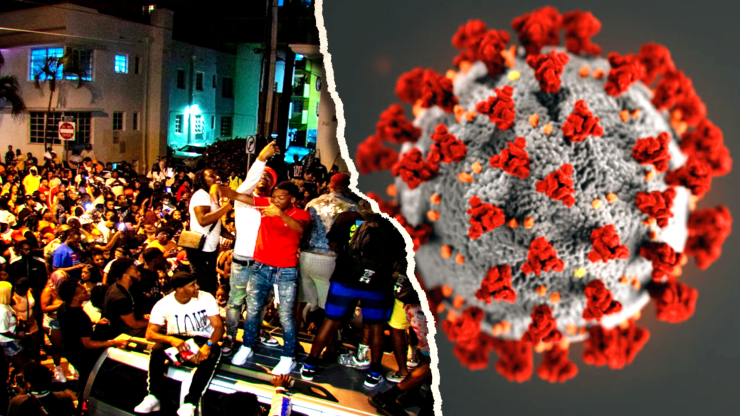 Officials in Miami Beach moved Sunday to extend a curfew in parts of the city for at least three weeks in an effort to crack down on spring breakers.

Over the last several weeks, the city has been packed with partiers ignoring social distancing and masking guidelines. In fact, officials have said that this year, there have been more visitors and more disruptions than in previous years despite the ongoing coronavirus pandemic.

Police have reported fights breaking out, property destruction, and several stampedes, including one that was started after someone fired gunshots into the air. According to the Miami Beach Police Department, since early February, about 1,000 arrests have been made and 80 firearms have been seized.

Notably, around 51% of arrests involved non-Florida residents, and police in neighboring cities have sent officers to help crowd management.

The situation escalated last week and culminated heading into the weekend. Videos showed thousands of people openly drinking, dancing, and partying in the streets, shoulder-to-shoulder on the city’s iconic Ocean Drive.

The city imposed a state of emergency and an 8 p.m. curfew in the entertainment district Saturday night, but that failed to stop the partiers. Police then responded by sending in SWAT teams and personnel from multiple law enforcement agencies in riot gear, who broke up crowds with pepper balls.

The move has drawn criticism, especially from Black activists and advocacy groups in the city, who claimed many of the people they dispersed were Black. City officials have argued they were targeting conduct, not groups of people, and that police had fired the pepper balls after a group rushed them.

On Sunday, Miami Beach authorities moved to extend the curfew — which was initially set for 72 hours — until April 12, when spring break usually ends. The leaders also voted to extend the state of emergency until at least Monday evening.

Under the current rules, Ocean Drive will be closed to all vehicle and pedestrian traffic from 8 p.m. until 6 a.m. four nights a week, with exceptions for residents, hotel visitors, and employees in the area. Bridges and other main causeways into the city will also be blocked.

Many have said the move marks a major concession for Miami Beach and Florida at large, where both state and city leaders have been heavily encouraging tourists to come. Gov. Ron DeSantis (R) has recently bragged about how open the state is in an attempt to bring more tourists to Florida’s traditional spring break hot spots.

These efforts have continued despite the fact that Miami-Dade County, which houses Miami Beach, has recently seen one of the worst coronavirus outbreaks in the country. Florida — which currently ranks in the top 10 states for highest cases per capita and has seen increases in the last few weeks — is also believed to be the state with the largest concentration of the highly contagious and possibly more lethal U.K. strain.

In addition to worries about continued spikes in Florida as a result of the influx of spring breakers, experts have also expressed concern that the visitors will bring back new cases — and most alarming, new strains — to their home states when they return.

Suspect in Boulder Colorado Shooting Charged With 10 Counts of Murder