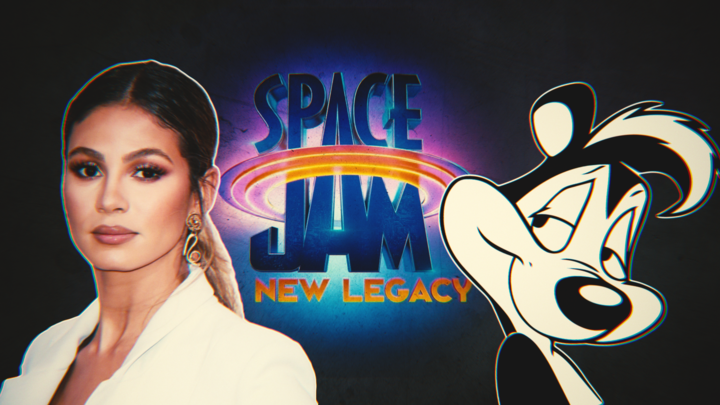 Actress Greice Santo and her team are continuing to speak out against the removal of her Pepe Le Pew scene from the upcoming movie, “Space Jam: A New Legacy.”

The scene featuring the controversial cartoon character was cut more than a year ago, according to The Hollywood Reporter, though news of it only broke over the weekend.

In it, Santo allegedly fights back against Pepe’s unwanted advances.

“Pepe was set to appear in a black-and-white Casablanca-like Rick’s Cafe sequence. Pepe, playing a bartender, starts hitting on a woman at the bar played by Santo. He begins kissing her arm, which she pulls back, then slamming Pepe into the chair next to hers,” Deadline reported Sunday. “She then pours her drink on Pepe, and slaps him hard, sending him spinning in a stool, which is then stopped by LeBron James’ hand.”

At one point, Pepe reportedly explains that another character has filed a restraining order against him, prompting James to tell Pepe that he can’t grab other Tunes without their consent.

When news of the scene’s removal broke, Santo’s team expressed disappointment in the decision.

“This was such a big deal for Greice to be in this movie. Even though Pepe is a cartoon character, if anyone was going to slap a sexual harasser like him, Greice wished it would be her,” a representative for the actress told Deadline. “Now the scene is cut, and she doesn’t have that power to influence the world through younger generations who’ll be watching Space Jam 2, to let younger girls and younger boys know that Pepe’s behavior is unacceptable,” they added.

That disappointment hasn’t seemed to die down because, according to a Thursday report from The Los Angeles Times, a rep for Santo believes the footage still exists and is offering a $100,000 reward to anyone that provides them with it.

Warner Bros. has not formally commented on why the footage was cut out of the film. Many initially believed the scene was dropped after a recent New York Times opinion article about the decision to pull six Dr. Seuss books from publishing. In that piece, writer Charles M. Blow argued that Pepe Le Pew “normalized rape culture,” while also criticizing characters like Speedy Gonzales and Tarzan.

After learning that it was removed quite some time ago, others linked it to the fact that the movie has changed directors since that scene was shot.

Santo told the L.A. Times she understands that changes like this happen over the course of production. Still, she hopes the footage can be released one way or another. If it can’t, she says she will not be deterred from continuing her work against sexual harassment and abuse.

See what others are saying: (The Los Angeles Times) (NBC News) (Deadline)