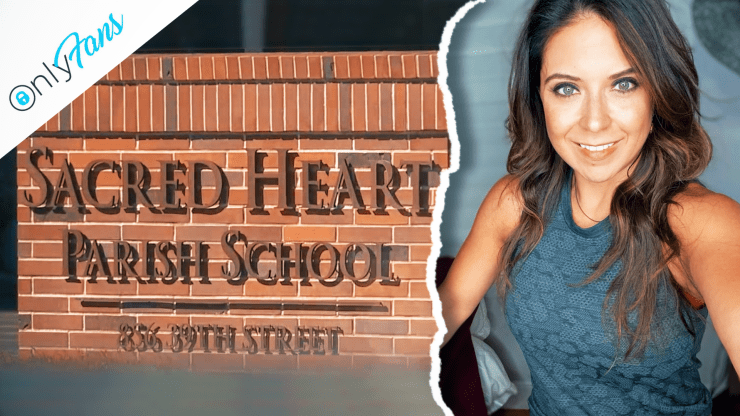 A mother in Sacramento, California says her three boys were expelled from their Catholic school after administrators discovered her OnlyFans account.

That mother is Crystal Jackson, who joined the site in 2019 to spice up her struggling relationship with her husband of 14 years, Chris.

Jackson says she does not post pornography on her account. Instead, she posts pinup-style photos in lingerie and includes “sexy stories” that play up the image of what she and Chris call “the mom next door.”

The account started as a secret between the two of them, but it has since become a huge success, bringing in over $150,000 a month along with hundreds of thousands of social media followers.

While the new venture has also brought her a boost of joy and self-confidence, her growing popularity on the platform eventually caught the attention of parents at Sacred Heart Parish School.

According to several interviews Crystal has given to media outlets, parents were relentlessly urging that her sons be kicked out of school.

They began harassing her with texts and voicemails bullying her and insulting her family. At one point, she says a group of mothers even printed out her OnlyFans photos and sent them anonymously in a packet to the school principal.

Some also reported her to their local priest and bishop and created a Facebook group to gossip about her family.

She was eventually removed as 2nd-grade ‘room mother’ due to the complaints. After growing tired of the treatment, she eventually gave an interview to The Sun about all the harassment.

But the issue escalated Sunday when the school sent her a letter notifying her of its decision.

“Your apparent quest for high-profile controversy in support of your adult website is in direct conflict with what we hope to impart to our students and is directly opposed to the policies laid out in our Parent/Student Handbook,” it read.

“We therefore require that you find another school for your children and have no further association with ours.”

Now, she says the school is working to update their handbook to include a rule that says: “Any parent who is involved in a site or blog that goes against teachings of the church and school philosophy must be removed.”

Crystal has continued to speak out against the school’s decision, telling People Magazine that her 8, 10, and 12 years old are good kids who are only being hurt by the school’s actions.

“Take me down, that’s fine, but leave my kids out of this,” she said.

“I didn’t want to be put out there, but at some point, I have to stand up and say I can’t take it anymore because this behavior is horrible,” she added.

Crystal noted that she was hoping to put her kids back in Catholic school but says she and her husband will likely have to put them in public school.

“They won’t allow them in this diocese, and is this really the place for them to be?” she said. “It’s clear that they said we don’t want you.”

“In the year 2021, here we are, trying to bring a woman down for her choices and what she does with her husband,” Crystal added. “It’s body shaming and bullying all encompassed into one and it’s such a double standard and disturbing.”

For now, she’s just hoping the judgment and harassment in her community will stop. “I’m still the same Crystal I was, like, two years ago, a year ago, when we had coffee, before you knew this.“

See what others are saying: (People) (NBC News) (The Sun)

Nearly 9 Million Are Without Water in Texas, Some Face Electric Bills up To $17,000