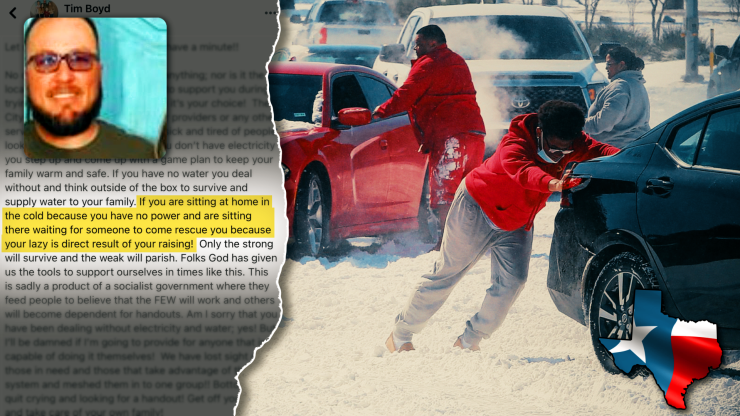 The mayor of Colorado City, Texas is facing intense backlash for comments he made on Facebook Tuesday claiming the local government has no responsibility to assist residents struggling amid historic winter temperatures.

The remarks came after community members turned to a local Facebook page asking if the city or county had emergency shelters in place to keep people warm amid widespread power outages.

In response, Mayor Tim Boyd wrote, “No one owes you [or] your family anything; nor is it the local government’s government’s responsibility to support you during trying times like this!”

“Sink or swim it’s your choice!” He continued. “The City and County, along with power providers or any other service owes you NOTHING! I’m sick and tired of people looking for a damn handout!”

Boyd argued that residents should come up with their own plans to keep their families safe. Those that are sitting at home in the cold waiting for assistance, he said, are “lazy” as a direct result of their raising.

“Only the strong will survive and the weak will parish,” he continued, likely meaning perish in his statement.

He blamed the calls for basic services like heat and electricity a product of a “socialist government where they feed people to believe that the FEW will work and others will become dependent for handouts.”

He closed by telling locals to “quit crying,” adding, “Get off your ass and take care of your own family!”

That now-deleted post drew immediate backlash as Texans continue to slam the government for not delivering adequate support amid the storm.

The outrage eventually prompted Boyd to write a follow-up post, which he also later deleted.

In it, he claimed that his comments “were taken out of context” and did not apply to the elderly; however, he continued to double down.

“I was only making the statement that those folks that are too lazy to get up and fend for themselves but are capable should not be dealt a handout. I apologize for the wording and some of the phrases that were used!”

Boyd said he already turned in his resignation and had not signed up to run for mayor again ahead of the deadline a few days ago. He also said he wished he would’ve kept his words to himself or been more descriptive, and he added that all the anger and harassment since his post has caused his wife to lose her job.

Ultimately, he said he was speaking as a citizen since he is no longer mayor and called for the harassment of his family to stop.

According to The Washington Post, it isn’t immediately clear if he resigned before or after writing his controversial Facebook post. As of early Wednesday morning, the paper noted that he was still listed as mayor on Colorado City’s website, and city council agendas showed that he had served in that role as recently as last week.

See what others are saying: (The Washington Post) (KTXS) (People)