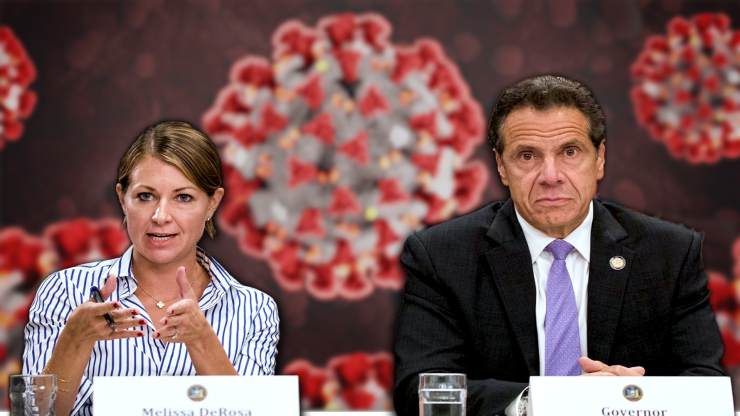 The revelations stem from a private conversation held Wednesday between lawmakers and the governor’s aide, Melissa DeRosa, that was first reported by the New York Post. During the call, DeRosa, the top nonelected official in the state, allegedly apologized for withholding the nursing home death totals after lawmakers and the Justice Department asked for the numbers in August.

“Basically, we froze,” she said, reportedly explaining that the governor’s office did not want to release the data due to former President Donald Trump’s attempts to turn the nursing home death tolls “into a giant political football.”

For nearly six months, the Cuomo administration has been locked in a battle with lawmakers and the Empire Center, a conservative-leaning think tank, over the release of the full counts.

The call with DeRosa comes just two weeks after state Attorney General Letitia James released a report accusing the Cuomo administration of undercounting the number of people who have died in nursing homes by the thousands.

James’ report forced the New York State Department of Health to publicize more than 3,800 unreported deaths of nursing home residents who had died of COVID in outside facilities, such as a hospital.

Those tallies had previously been left out of the state’s official nursing home death totals, and since their release, the number of deaths connected to nursing homes in the state has risen to about 15,000 from 12,743 in late January.

Lawmakers on both sides of the aisle have condemned Cuomo and his administration and called for accountability.

“This is a betrayal of the public trust,” State Senator Andrew Gounardes, a Democrat, tweeted. “There needs to be full accountability for what happened.”

Numerous Republicans have demanded probes and criminal prosecution. Some, including Republican State Senate Minority Leader Rob Ortt, have called for Cuomo to be stripped of his emergency power and, if he is found to be involved, ousted from office.

“The news today that Governor Cuomo’s top aide admitted to deliberately withholding information about COVID-19 deaths is the latest in a string of disturbing acts of corruption by his administration,” Ortt said in a statement. “If the Governor is involved, he should be immediately removed from office.”

DeRosa responded Friday in an attempt to clarify her statements.

“We needed to temporarily set aside the Legislature’s request to deal with the federal request first. We informed the houses of this at the time” she said. “We were comprehensive and transparent in our responses to the DOJ, and then had to immediately focus our resources on the second wave and vaccine rollout.”

See what others are saying: (The New York Times) (Politico) (CNN)

Trump Has Been Acquitted in His Impeachment Trial. Here’s What It Means. 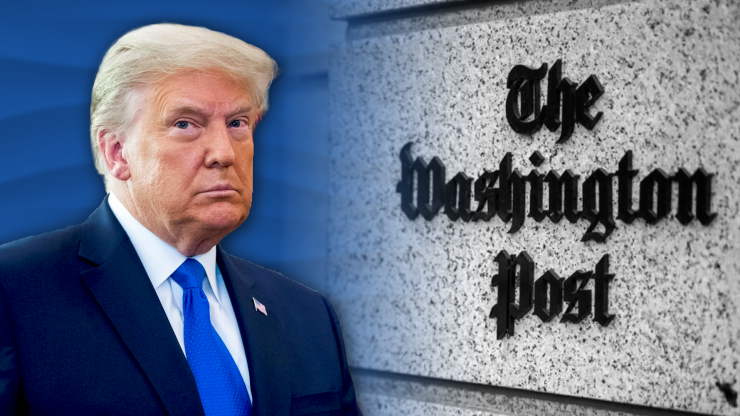 The Washington Post reported Friday that the Justice Department under former President Donald Trump secretly obtained phone records from some of its journalists regarding reporting they did on Russia’s role in the 2016 election.

According to the outlet, the DOJ sent three separate letters dated May 3 and addressed to three former Post journalists to inform them they were “hereby notified that pursuant to legal process the United States Department of Justice received toll records associated with the following telephone numbers for the period from April 15, 2017 to July 31, 2017.”

The letters, which listed work, home, or cellphone numbers, also stated that prosecutors had gotten a court order to obtain records for the reporters’ work email accounts, but that they did not ultimately not obtain those records.

The phone records, the outlet said, “included the numbers of all the calls made to and from the targeted phone over the specified time period, and how long each call lasted, but do not include what was said in those phone calls.”

“Investigators often hope such records will provide clues about possible sources the reporters were in contact with before a particular story published,” it added.

The Post reported that the letters do not say why the DOJ was seizing the phone records. However, it did note that toward the end of the time period outlined, the three reporters had written a story about classified U.S. intelligence intercepts that indicated then-Attorney General Jeff Sessions had discussed the Trump campaign with Russia’s ambassador to the U.S. when he was a sitting senator in 2016.

The alleged move is significant because it is rare for the DOJ to use subpoenas in order to obtain records of reporters in leak investigations. In fact, the last high-profile seizure of communication records was part of an investigation into a source cited in 2017 reporting that was also about the investigation into Russian election interference.

Also very notably, these subpoenas need to be approved directly by the attorney general. A spokesperson for the DOJ told The Post that the records had been requested in 2020, meaning it would have likely taken place under Attorney General William Barr, who stepped down on Dec. 23.

The allegations immediately drew criticism from First Amendment advocates and journalists, who have long opposed the practice of obtaining these kinds of records, and argued that attempts to identify sources of leaks hurt critical news gathering and reporting.

“We are deeply troubled by this use of government power to seek access to the communications of journalists,” said Cameron Barr, the current acting executive editor of The Post. “The Department of Justice should immediately make clear its reasons for this intrusion into the activities of reporters doing their jobs, an activity protected under the First Amendment.”

Many other journalists also demanded that the Biden administration ensure such practices are not replicated, noting the escalated efforts to subpoena reporters records under both the Trump and Obama administrations.

However, a DOJ spokesperson defended the previous administration’s decision to subpoena The Post reporters in a statement to the outlet.

“While rare, the Department follows the established procedures within its media guidelines policy when seeking legal process to obtain telephone toll records and non-content email records from media members as part of a criminal investigation into unauthorized disclosure of classified information,” the spokesperson said.

“The targets of these investigations are not the news media recipients but rather those with access to the national defense information who provided it to the media and thus failed to protect it as lawfully required.”

See what others are saying: (The Washington Post) (Variety) (CNN) 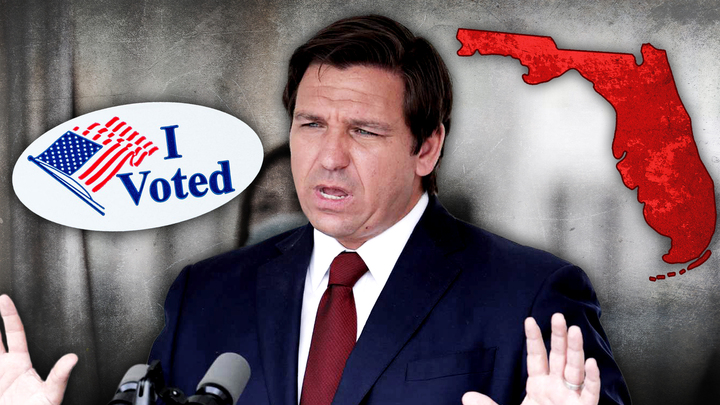 The new law contains many provisions similar to the dozens of pieces of legislation aimed at restricting voting access that have been proposed and approved in the months following the 2020 election.

Among other measures, the Florida law will:

On top of that, critics have also said the new law could result in longer lines for both early in-person and Election Day voting. Democrats and voting rights advocates have also argued that this is just a transparent attempt to suppress voters, and specifically voters of color.

Republicans, meanwhile, have claimed the new law is necessary to make elections more secure — claims that were reiterated by DeSantis during the signing ceremony.

“Me signing this bill says, ‘Florida, your vote counts,’” he said. “Your vote is going to be cast with integrity and transparency, and this is a great place for democracy.”

In addition to backlash against the new law itself, many condemned DeSantis for speaking about transparency but then completely shutting the media out of the signing, which was broadcasted exclusively on Fox News.

Numerous individual reporters and outlets were blocked from accessing the event, including Jay O’Brien, a reporter for the local CBS affiliate, who tweeted that the station was supposed to film pool footage of the event to feed to affiliates nationwide.

“This isn’t a story about the press being locked out of an event,” O’Brien later added. “It’s about Floridians who had their eyes and ears in that room cut off. @GovRonDeSantis signed a law today that will impact ALL Floridians. And only some viewers were allowed to see it. That’s not normal.”

That disbelief was also echoed by other outlets, like The New York Times, which explained that “Giving exclusive access to a cable news network was unusual, if not unprecedented.”

Meanwhile in Texas, Republican leaders are ignoring the pleas of major corporations like Dell, Microsoft, and American Airlines by moving forward with legislation that would make the state one of the toughest to vote in throughout the entire country. That proposal, which has already been passed by the state Senate, could see a full state House vote as early as next week.

See what others are saying: (The Washington Post) (The New York Times) (CBS News) 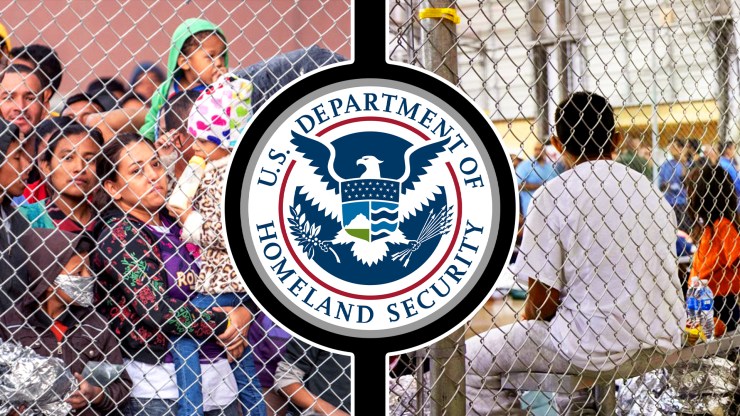 Homeland Security Secretary Alejandro Mayorkas announced Sunday that four migrant parents who were separated from their children and deported alone under former President Donald Trump’s controversial family separation policy will be allowed to return to the U.S. and reunite with their kids.

The “zero tolerance” policy, one of Trump’s most notorious actions on immigration, was formally enacted in April 2018 and ended just months later in June after a federal judge forced the administration to stop.

It was later revealed that the administration had actually been regularly separating families throughout much of 2017. According to government documents, over 5,500 children were separated from their parents in 2017 and 2018.

Most of those families were later reunited, but at least 1,000 parents remained separated because a parent had been deported. More than half of those parents — an estimated 645 — still had not been contacted by the time Trump left office.

President Joe Biden has said reuniting families would be a top priority as he begins undoing the complex network of immigration policies set by Trump. This latest move marks the first families that will be reunited through the Family Reunification Task Force, which Biden created shortly after taking office in January.

So far, that task force has managed to find around 200 of the 645 remaining parents and recently reported that it’s looking into 5,600 files from the first few months of the Trump administration that may have evidence of even more separations.

While immigration advocates and lawyers applauded the move, they also criticized the slow rate of reunification. Some also accused the Biden administration of taking credit for the reunions despite doing very little to facilitate them.

“Despite what Secretary Mayorkas would have the public believe, DHS has done nothing to facilitate the return and reunification of these parents this week, other than to agree to allow them in,” said Carol Anne Donohoe, a managing attorney for the reunification project run by immigrant advocacy organization Al Otro Lado.

“The only reason these mothers will be standing at the port of entry is because Al Otro Lado negotiated their travel visas with the Mexican government, paid for their airline tickets and arranged for reunification,” she added.

Many advocacy groups have also slammed the Biden administration for not doing enough to plan what happens next for these families. Some have urged them to provide permanent legal status to parents so they cannot be separated from their children again, as well as support services and potential financial compensation.

The parents arriving this week will be allowed to temporarily stay in the country under what’s called humanitarian parole, their long-term immigration status and what happens from here is largely up in the air.

See what others are saying: (The New York Times) (NPR) (NBC News)