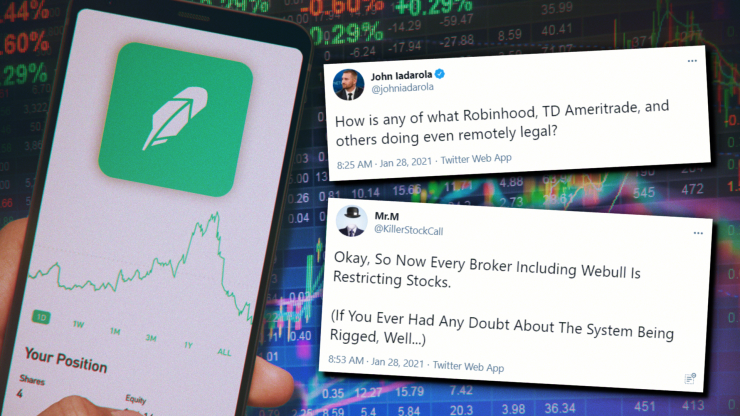 Update: As of Thursday afternoon, Robinhood has announced that it will resume limited trading of securities on Friday. Meanwhile, WeBull has now lifted its trading restrictions.

In an extremely controversial move, the popular trading app Robinhood restricted users from being able to buy new stock for GameStop, AMC, Blackberry, Nokia, Bed Bath & Beyond, and more on Thursday.

WeBull, another free-to-trade brokerage app, made a similar call hours later when it blocked users from buying shares of GameStop, AMC, and Koss. In separate statements, each company cited volatility in the market as catalysts for their decisions.

While users can’t buy new stock, both apps are still allowing users to sell off their existing shares. In effect, that means Robinhood and WeBull are only allowing moves that will push stocks in companies like GameStop back down.

Both moves come as the U.S. stock market has been heavily upended by a group of Redditers from the subreddit WallStreetBets (WSB). Notably, they’ve been leveraging a process known as short-squeezing to force hedge funds to take massive losses in these stocks.

While short-squeezing is by no means a new tactic, the efforts by WSB over the last week have been wholly unprecedented. For example, GameStop’s share price surged to $470 Thursday morning, but just half a year ago, its shares were only priced at $4.

Its success then led to a number of other stocks getting short-squeezed, though none of them have come close to matching GameStop’s metrics. In fact, Thursday, many of those stocks fell and appeared to re-approach their pre-squeeze numbers (with the notable exception of the joke cryptocurrency Dogecoin).

The loss of Robinhood and WeBull for WallStreetBets traders, as well as those jumping onto the hype fueled by their actions, represents a significant setback.

For one, both apps are extremely popular. Coupled with that popularity, they also allow users to purchase stocks without any fees attached. Notably, that feature has been instrumental in driving up GameStop’s price as traditional brokerage firms generally charge fees.

It’s also why news of Robinhood’s decision has far out-shadowed similar restrictions put on some forms of trading by traditional firms like TD Ameritrade and Charles Schwab.

Online, users of Robinhood were quick to criticize the company and accuse it of abandoning its mission: “to democratize finance for all.”

As criticism continued to pour in from all corners of the Internet, users began to review-bomb the app on Google Play, and Robinhood has now even been slapped with at least two class-action lawsuits from customers.

Before WeBull announced it would follow Robinhood’s example, many users lamented that they would be switching to WeBull; however, that still represented a problem for GameStop’s stock. Two hours after Robinhood’s announcement, shares of GameStop plummeted to $130. Meanwhile, a new WeBull account would take several days to activate.

Shares of GameStop eventually closed at just under $200 on Thursday.

See what others are saying: (Newsweek) (Engadget) (CNBC)