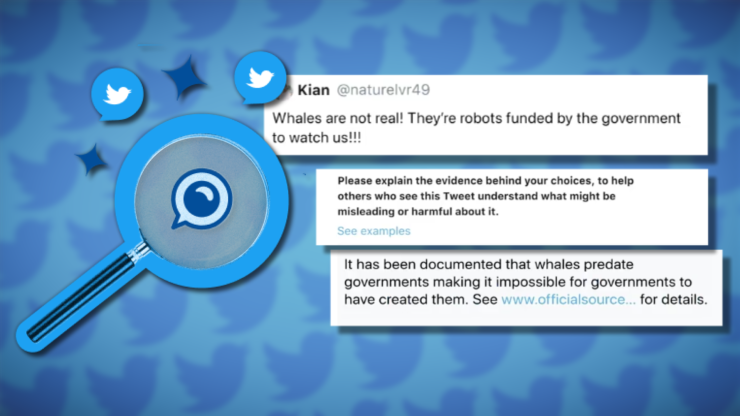 Twitter is continuing its battle against misinformation by launching Birdwatch, a new tool where users can fact check tweets themselves.

The program allows users to write notes that provide factual context to a Tweet they know contains false or misleading statements. As of now, the program is in pilot mode and is only available to a select few users who apply to it. The application is open to all Twitter users who have a verified phone and e-mail, two-factor authentication, a trusted U.S. phone provider, and have not recently broken the site’s rules. Fact checks can only be seen on the Birdwatch site, though Twitter’s eventual goal is for all Twitter users to see it on the platform directly.

“People come to Twitter to stay informed, and they want credible information to help them do so,” the company said in a statement announcing the news Monday. “This isn’t always easy with the spread of misleading information online. Birdwatch is a community-driven approach to addressing this problem, seeking to create a better-informed world.”

Twitter users will also be able to rate the helpfulness of the notes provided, which will hopefully prevent the feature from being misused. The company says it spoke to 100 people from across the political spectrum who believe this tool could be effective. Many were apparently particularly supportive of fact checks coming from a community voice rather than Twitter or another authority.

“We believe this approach has the potential to respond quickly when misleading information spreads, adding context that people trust and find valuable,” Keith Coleman, the Vice President of Product at Twitter wrote.

Like most social media platforms, Twitter had been trying to combat the growing spread of misinformation for years. This problem surged with the pandemic and the 2020 U.S. election. The company started adding fact-checking labels to tweets in the spring. After misinformation about election results contributed to an attack at the U.S. Capitol, the company removed President Donald Trump from its platform. Many other social media companies did the same.

Twitter’s battle with misinformation is nowhere near over. Still, the company hopes a community-centered tool like Birdwatch will be beneficial to the site.

In its announcement, Twitter acknowledged the potential problems a tool like this could pose but maintained that it is still a “model worth trying.”

“We know there are a number of challenges toward building a community-driven system like this — from making it resistant to manipulation attempts to ensuring it isn’t dominated by a simple majority or biased based on its distribution of contributors,” Coleman wrote. “We’ll be focused on these things throughout the pilot.”

In an effort to prioritize transparency with Birdwatch, all data contributed to the program will be publicly available and downloadable. Twitter also plans on publishing the code that powers it.

See what others are saying: (The Verge) (NBC News) (Washington Post)

Related Topics:2020 ElectionBirdwatchFeaturedmisinformationpandemicSocial MediaTwitter
Up Next 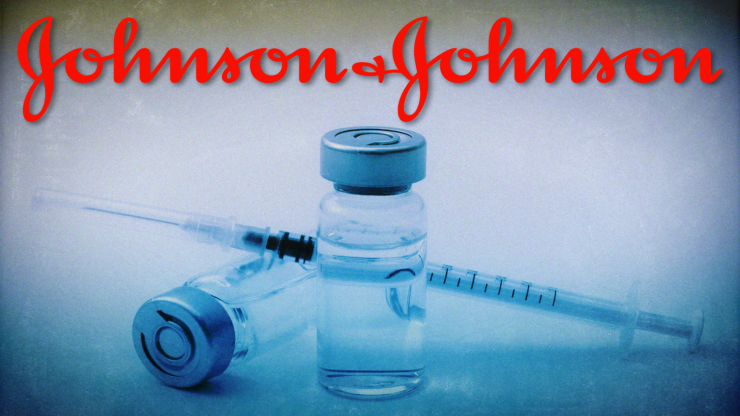 The Centers for Disease Control and Prevention recommended Johnson & Johnson’s COVID-19 vaccine on Sunday for Americans 18 and older. With that, the first doses of the vaccine began shipping out Monday, and vaccinations are expected to begin sometime this week.

The CDC’s recommendation came one day after the Food and Drug Administration authorized the vaccine for emergency use.

Johnson & Johnson is expected to ship 3.9 million doses this week. By the end of March, it hopes to have shipped a total of 20 million doses.

Johnson & Johnson’s vaccine is also notable for two reasons. First, it doesn’t need to be kept frozen like the Pfizer vaccine and can be kept in a fridge for much longer than the Moderna vaccine. Second, it only needs to be administered once — not twice.

The approval and recommendation of this vaccine come at a potentially pivotal juncture. Since mid-January, the rate of new COVID-19 infections has been steadily falling; however, for the last week, daily infection rates have begun to plateau.

While it’s undoubtedly good news that the U.S. isn’t once again seeing a rise in cases, as CDC Director Rochelle Walensky explained, this is “a very concerning shift in the trajectory.”

That’s because it very likely could result in a rise in cases.

For example, experts worry that the public, as well as state and local officials, may be starting to let their guards down after hearing the news of falling infection rates. Still, those experts have reminded people that Monday marks one year since the announcement of the first coronavirus death in the U.S.

Since then, the U.S. alone has logged more than half a million deaths from this virus.

The addition of the Johnson & Johnson vaccine has the capacity to help keep infection rates from climbing once more, but that doesn’t mean there won’t be some challenges.

In fact, a major concern now seems to be around the effectiveness of the vaccine.

Notably, in late-stage trials, it was 85% effective against severe cases of COVID-19, with no deaths or hospitalizations being reported in the month after participants received the vaccine. It was also found to be around 72% effective at preventing moderate infections.

Still, that’s less than the 94% and 95% efficacy rates for the Moderna and Pfizer vaccines, respectively.

Because of that discrepancy, some health officials have begun to worry that people will try to skip the Johnson & Johnson vaccine in favor of the other two.

As a result, experts are assuring the public that Johnson & Johnson’s vaccine is still highly effective. They’ve also noted that the studies for the three different vaccines happened at different stages of the pandemic and in different environments.

“They were compared under different circumstances,” Dr. Anthony Fauci, director of the NIAID, said. “All three of them are really quite good, and people should take the one that’s most available to them… people need to get vaccinated as quickly and as expeditiously as possible.”

See what others are saying: (The Washington Post) (Reuters) (CNN) 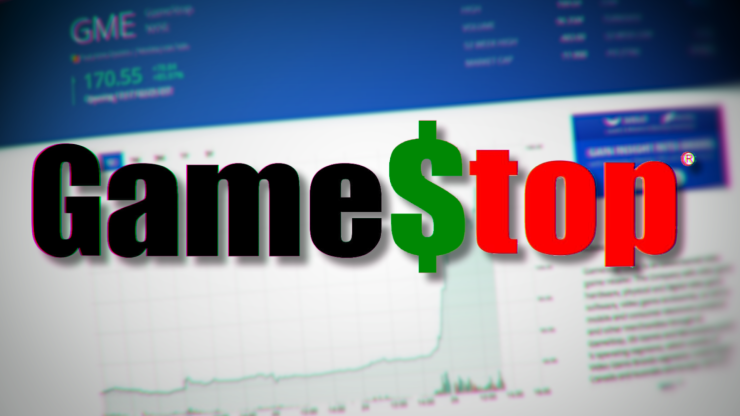 The outcome is similar to what happened in January when investors caused short-sellers to lose billions by driving up GameStop’s share price. At the time, it even resulted in one short-selling hedge fund receiving a nearly $3 billion bailout.

The reason why short-sellers keep losing money when GameStop’s share price soars is that the entire process of short-selling requires them to bet against a company’s success.

That can be done for any number of reasons, but usually, people short-sell a stock because they believe a company will fail or that its share price will go down. If either of those two outcomes occurs, the short-seller makes money; however, if the share price goes up, the seller is left with a climbing bill that, in theory, has no limit.

In the later hours of trading on Wednesday, GameStop’s stock began to surge for the second time this year (thanks in part to the image of a McDonald’s ice cream cone). In fact, it jumped from around $50 a share to $90 a share in just 90 minutes.

That same day, short-sellers posted $664 million in losses, according to the analytics firm S3 Partners. By Thursday, S3 said they posted another $1.19 billion in losses.

Friday afternoon marked the first time since Thursday that share prices for GameStop have fallen below $100.

Can Investors Save GameStop?

It’s no secret that GameStop has been failing for years.

GameStop, along with other former brick-and-mortar giants, has faltered to the behemoth that has become online shopping. While other companies have been able to adapt, that’s proved more challenging for GameStop, in part because gamers can now buy titles directly from their consoles.

That said, some see GameStop’s recent situation in the stock market as a golden opportunity for the company to rebrand itself. Many investors poured money into GameStop to inflict substantial wounds on hedge fund short-sellers and others simply shelled out cash in the hopes of getting rich quickly, but many also found themselves contributing to GameStop out of love for the company.

Investors on the subReddit WallStreetBets, which has largely been credited with driving GameStop’s volatility this year, affectionately refer to investor and newly-minted GameStop board member Ryan Cohen as “Papa Cohen.” In fact, many on the message board believe he has the vision to save the retailer.

In a tweet, Citron Research said such a move “is obvious and easy to justify stock price.”

See what others are saying: (Insider) (RT) (Reuters) Game Stop is seeing yet another major surge in its stock prices this year. During the last few hours of trading Wednesday evening, share prices for the video game retailer jumped from under $50 to above $90.

That price soared as high as $170 in pre-market trading Thursday morning.

Stocks like AMC and Koss have also seen notable spikes over the past 24 hours, though both have been much smaller in scale.

Details about what exactly is driving this latest stock price increase are unclear, though different speculations are already circulating.

Outlets like CNBC have partially attributed the spike to the reported forced resignation of GameStop’s Chief Financial Officer, Jim Bell.

Others have attributed the surge to a photo of a McDonald’s ice cream cone, of all things. While such an explanation may seem out-of-left-field, it’s heavily connected to the “meme stocks” frenzy that first drove GameStop’s meteoric rise last month.

In January, GameStop share prices soared to unprecedented highs as a group of Redditors on the message board WallStreetBets encouraged each other to stuff their money into the stock.

Though GameStop as a business has been failing for years, that was precisely why those Redditors were so keen on the stock. Many wanted to support the company simply because they like it and have a nostalgic attachment to it. Others also wanted to make certain Wall Street hedge funds pay for betting on GameStop’s failure.

Notably, the ice cream photo was shared by Ryan Cohen, a GameStop investor who — as of the start of this year — also sits on the company’s board of directors.

A number of people on WallStreetBets refer to him as “Papa Cohen,” and many hold the belief that he has the vision to transform GameStop into a profitable online business. As a result, many have interpreted this tweet as a cryptic call-to-action.

As a reporter for The Verge noted, a number of factors are likely playing a role here, including Bell’s ousting, Cohen’s ice cream tweet, and a Congressional testimony last week from Reddit user Roaring Kitty.

Kitty, whose real name is Keith Gill, is an investor who’s largely been credited with helping to drive the meme-stock frenzy. In fact, this past Friday, Gill also bought an additional 50,000 shares of GameStop.

On Wednesday, American investor Charlie Munger blamed free-to-trade apps like Robinhood for the current meme stock frenzy, calling it “a culture which encourages as much gambling in stocks by people who have the mindset of racetrack bettors… It’s a dirty way of making money.”

In a statement made on Thursday, a Robinhood spokesperson refuted Munger’s characterization, saying, “To suggest that new investors have a ‘mindset of racetrack bettors’ is disappointing and elitist.”

See what others are saying: (Kotaku) (The Verge) (CNBC)