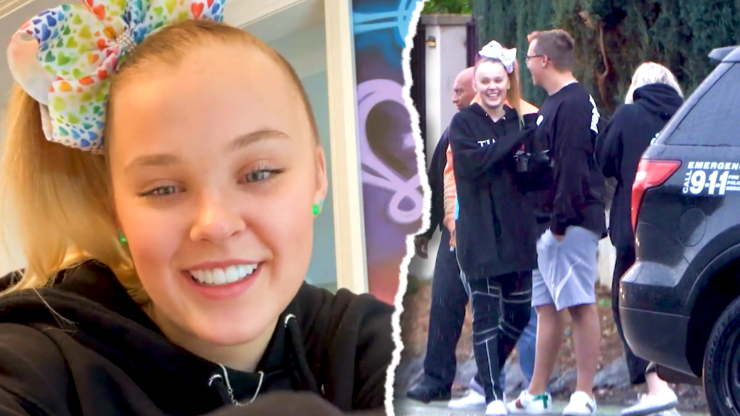 JoJo Siwa, the 17-year old YouTube star who is massively popular among kids, was swatted at her home on Saturday, hours after coming out as a member of the LGBTQ+ community.

During an Instagram Live with her videographer Nate Javier, Siwa confirmed that officers from the Los Angeles Police Department were called to her house on a false report.

Everyone inside had to step out with their hands up. As this happened, Siwa says paparazzi came out from around the corner.

She believes the media called the police to force her outside so they could photograph her while there was so much excitement surrounding her coming out.

She called the incident “really scary” but said that she is safe and fine.

“For me it was no big deal to walk outside my house. I’m okay,” she said. “But I feel bad because there was about 50 police at our house and those police could have had much better time spent somewhere else actually helping somebody instead of dealing with a fake claim from paparazzi.”

Siwa made headlines over the weekend as fans began to speculate that she might be coming out. They were first tipped off by a handful of TikToks she appeared in, including one where she lip-synched to “Born This Way” by Lady Gaga. Then on Friday, Siwa shared a photo of herself wearing a shirt from her cousin that said “Best. Gay. Cousin. Ever.”

Many took this photo as her coming out and began to celebrate her for sharing this. On Saturday the star went live on Instagram confirming that she is part of the LGTBQ community. She thanked her fans for their support.

“I have never ever ever been this happy before and it feels awesome,” she said.

Siwa said she is not yet ready to specifically label herself and that right now she is just happy to be open and sharing this part of her life with the public.

“The reason I’m not ready to say this answer is because I don’t really know this answer,” she explained.

“I wanna share everything with the world. I really do. But I also want to keep things in my life private until they are ready to be public,” Siwa continued. “Right now what matters is that you guys know that no matter who you love, that it’s okay.”

Praise for Siwa Rolls In

“You’ve got our love,” Koshy wrote. “Shine on as always!”

“This is the happiest I’ve ever seen you,” Ballinger said. “You’re absolutely glowing and I’m so proud of the woman you are becoming.

Many were also quick to point out the potential impact her coming out could have considering her large following of young people.

“JoJo Siwa’s decision to share her truth with the world is a powerful moment,” wrote Sarah Kate Ellis, the president of GLAAD.

“As one of the most influential young role models today, Jojo’s story is a reminder for LGBTQ youth to love who they are and to find safe and welcoming environments to speak out.”

See what others are saying: (BuzzFeed News) (Newsweek) (Seventeen)