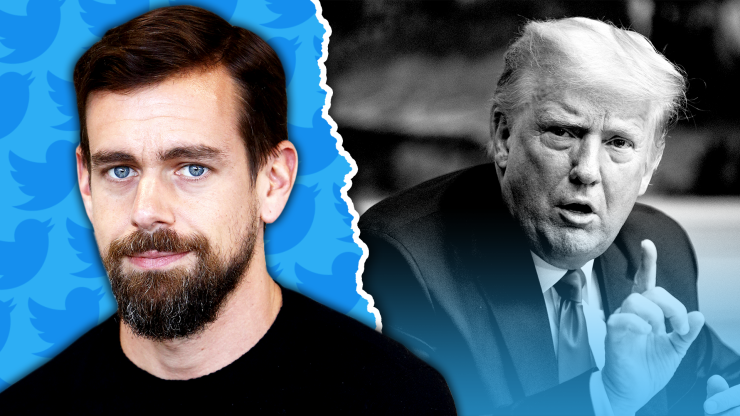 Twitter made the decision to ban Trump on Jan. 8, two days after pro-Trump insurrectionists stormed the U.S. Capitol complex in an assault that left multiple dead.

“I do not celebrate or feel pride in our having to ban [Trump] from Twitter, or how we got here,” Dorsey said in the first of 13 tweets.

“Offline harm as a result of online speech is demonstrably real, and what drives our policy and enforcement above all,” he added.

“That said, having to ban an account has real and significant ramifications,” Dorsey continued.

“[It] sets a precedent I feel is dangerous: the power an individual or corporation has over a part of the global public conversation.”

Dorsey described most bans as a failure of Twitter to “promote healthy conversation,” though he noted that exceptions to such a mindset also exist. Among other failures, Dorsey said extreme actions like a ban can “fragment public conversation,” divide people, and limit “clarification, redemption, and learning.”

Dorsey: Trump Bans Were Not Coordinated

“A company making a business decision to moderate itself is different from a government removing access, yet can feel much the same,” he said.

Indeed, multiple legal experts have stated that Trump’s ban on social media does not amount to First Amendment violations, as the First Amendment only addresses government censorship.

“If folks do not agree with our rules and enforcement, they can simply go to another internet service,” Dorsey added. However, Dorsey noted that such a concept has been challenged over the past week.

This moment in time might call for this dynamic, but over the long term it will be destructive to the noble purpose and ideals of the open internet. A company making a business decision to moderate itself is different from a government removing access, yet can feel much the same.

Trump has now been banned or suspended from a number of platforms, including Facebook, Instagram, and YouTube. On Wednesday, Snapchat announced plans to terminate Trump’s account in the “interest of public safety.” Previously, Snapchat had only suspended his account, but as of Jan. 20, it will be permanently banned.

Addressing criticism of the swift bans handed down by these platforms in the wake of the Capitol attack, Dorsey said he doesn’t believe Trump’s bans on social media were coordinated.

“More likely: companies came to their own conclusions or were emboldened by the actions of others,” he said.

Dorsey’s thread regarding the fragile nature of regulating users’ privileges on the platform seemed to play out earlier the same day.

“In this instance, our teams took the incorrect enforcement action. The Tweet in question is now labeled in accordance with our Civic Integrity Policy. The Tweet will not be required to be removed and the account will not be temporarily locked,” a spokesperson for the platform told Insider.

The latest tweet from Boebert’s account to be tagged with a fact check warning is from Sunday. In that tweet, she baselessly and falsely accuses the DNC of rigging the 2020 Election, a claim that largely inspired the Capitol attacks.

See what others are saying: (Business Insider) (CNN) (Associated Press)