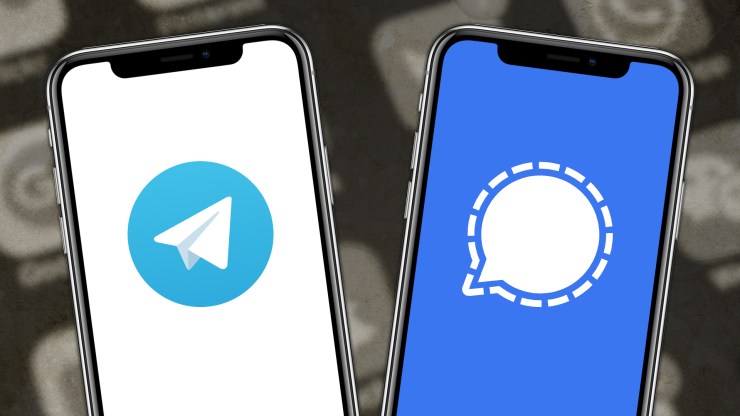 Downloads for the encrypted messaging apps Signal and Telegram have surged in the last week after WhatsApp announced that it will start forcing all users outside the E.U. and U.K. to share personal data with Facebook.

Last week, WhatsApp, which is owned by Facebook, told users that they must allow Facebook and its subsidiaries to collect their phone numbers, locations, and the phone numbers of their contacts, among other things.

Anyone who does not agree to the new terms by Feb. 8 will lose access to the messaging app. The move prompted many to call for people to delete WhatsApp and start using other services like Signal or Telegram.

Now, it appears those calls to use other encrypted messaging apps have been heard. According to data from app analytics firm Sensor Tower, Signal saw 7.5 million installs globally through the App Store and Google Play from Jan. 6 to Jan. 10 alone, marking a 4,200% increase from the previous week.

Meanwhile, Telegram saw even more downloads. During the same time, it gained 9 million users, up 91% from the previous week. It was also the most downloaded app in the U.S.

WhatsApp responded to the exodus by attempting to clarify its new policy in a statement Monday.

“We want to be clear that the policy update does not affect the privacy of your messages with friends or family in any way,” the company said. “Instead, this update includes changes related to messaging a business on WhatsApp, which is optional, and provides further transparency about how we collect and use data.”

Other Causes of App Growth

Notably, some of the spikes in the Telegram downloads, specifically, also come from many supporters of President Donald Trump flocking to alternative platforms after Parler was shut down and Trump was banned from Twitter and Facebook.

Far-right chat room membership on the platform has increased significantly in recent days, NBC News reported. Conversations in pre-existing chatrooms where white supremacist content has already been shared for months has also increased since the pro-Trump insurrection at the U.S. Capitol last week.

According to the outlet, many of the president’s supporters have moved their operations to the app in large part because it has very lax community guidelines. Companies like Facebook and Twitter have recently cracked down on groups and users sharing incendiary content, known conspiracy theories, and attempting to organize events that could lead to violence.

There have been several documented instances of Trump supporters now using Telegram channels to discuss planned events and urge acts of direct violence. Per NBC, in one channel named “fascist,” users have called on others to “shoot politicians” and “encourage armed struggle.” A post explaining how to radicalize Trump supporters to become neo-Nazis also made rounds on the “fascist” channel, among others.

Membership one channel frequently used by members of the Proud Boys has grown by more than 10,000 in recent days, seeming to directly attract users from Parler.

“Now that they forced us off the main platforms it doesn’t mean we go away, it just means we are going to go to places they don’t see,” a user posted in the chatroom, according to NBC.

See what others are saying: (NBC News) (Business Insider) (CNBC)