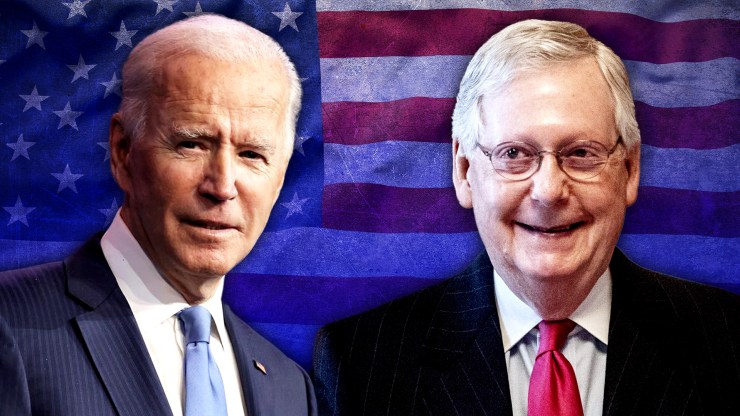 “Many millions of us had hoped the presidential election would yield a different result, but our system of government has a process to determine who will be sworn in on January the 20th,” McConnell said on the Senate floor. “The Electoral College has spoken, so today, I want to congratulate President-elect Joe Biden.”

The election was called for Biden 38 days ago but many key Republicans either avoided acknowledging President Donald Trump’s defeat or outright denied it. The Electoral College’s certification marked a change in tune for many leaders in the party who are now finally coming to terms with the results.

“At some point you have to face the music,” Senate Majority Whip John Thune (R-Sd.) said on Monday. “Once the Electoral College settles the issue today, it’s time for everybody to move on.

“We’ve now gone through the constitutional process, and the electors have voted, so there’s a president-elect,” Sen. Roy Blunt (R-Mo.), the chairman of the inaugural committee, told reporters. Blunt had repeatedly avoided calling Biden the president-elect in the past.

“I will, as chairman of the Joint Congressional Committee on Inaugural Ceremonies, work with President-elect Biden and his presidential inaugural committee to plan for the swearing-in ceremony on January 20,” he later added in an interview with the Kansas City Star.

“It’s a very, very narrow path for the president,” he told reporters, “but having said that, I think we’ll let those legal challenges play out.”

Even Russian President Vladamir Putin has now congratulated Biden on his win.

“Vladimir Putin wished the President-elect every success and expressed confidence that Russia and the United States, which bear special responsibility for global security and stability, can, despite their differences, effectively contribute to solving many problems and meeting challenges that the world is facing today,” the Kremlin said in a Tuesday statement.

Now that the Electoral College has certified Biden’s win, with 306 votes to Trump’s 232, Biden delivered remarks celebrating the victory. He praised the strength of the country’s democracy and thanked those who worked hard to uphold it.

“In America, politicians don’t take power, people grant power to them,” Biden said. “The flame of democracy was lit in this nation a long time ago. And we now know that nothing, not even a pandemic or an abuse of power, can extinguish that flame.”

Biden gave a special thanks to election workers who not only worked through a pandemic, but stood their ground as Trump tried to lodge baseless claim after baseless claim of fraud, leading to threats against them.

“[The election] was honest, it was free, and it was fair,” Biden said. “They saw it with their own eyes, and they wouldn’t be bullied into saying anything differently.”

The Electoral College results will be sent to Congress to be counted on Jan. 6.

For his part, Trump is still sending out endless tweets making unfounded claims of voter fraud. Dozens of lawsuits challenging the election have been tossed out across the country, but that has not stopped the president from pulling at straws, even as he is set to leave the White House in five weeks.

Even with that limited time in office, he is continuing to wage a war against those who go against him. On Monday, Attorney General William Barr announced his resignation. Barr was among Trump’s closest allies until early December when he released a statement saying that the Department of Justice had found no evidence of widespread fraud in the election. He then fell out of the President’s favor. The president slammed him for Barr for this, and continued criticisms of him over the weekend, lashing out at Barr for not publicly disclosing information related to an investigation into Hunter Biden.

He then announced Barr’s departure in a tweet. Deputy Attorney General Jeff Rosen will take his place for the remaining month of Trump’s term.

Barr also made comments about his departure, releasing a letter that showered Trump with praise.

“I am greatly honored that you called on me to serve your Administration and the American people once again as Attorney General,” he wrote. “I am proud to have played a role in the many successes and unprecedented achievements you have delivered for the American people.”

See what others are saying: (Politico) (Associated Press) (NPR)

The U.S. Has Administered Its First Doses of the COVID-19 Vaccine