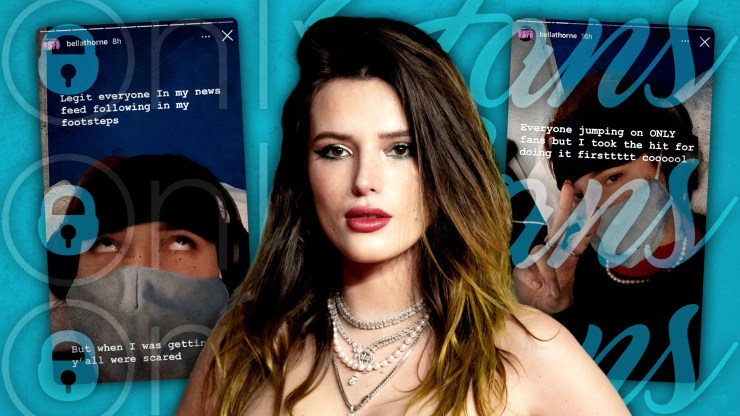 Former Disney Channel star Bella Thorne trended on Twitter Monday evening as social media users criticized her for calling herself the “first” to use OnlyFans.

“Everyone jumping on OnlyFans but I took the hit for doing it firsttttt coooool,” Thorne said in a story posted to her Instagram account over the weekend.

“Legit everyone in my news feed following in my footsteps,” she said in a follow-up post on her story. “But when I was getting heat y’all were scared.”

Many on social media were quick to condemn Thorne yet again for insinuating that she had led to the site’s popularity. A number of people also noted that other celebrities such as Cardi B, Blac Chyna, and Tana Mongeau all created Onlyfans before her.

“Plenty [of] celebrities started an OF before Thorne and got no heat because they didn’t step on the very people that built up her platform,” one user said.

“If #BellaThorne said she was the first to join and scam, then cause the platform to install new rules and regulations that affected workers on there, then I’d totally agree with her,” another said.

Others attributed OnlyFans’ success to the sex workers on the platform, not celebrities.

“Hey @bellathorne,” one person tweeted. “I’ve been making my living on onlyfans for like a year and a half now after seeing the success other sex workers had been having for quite some time on there. Tell me again how you did it first? Unclear on the timeline.”

Thorne has yet to publicly respond to the criticism.

Thorne created her OnlyFans account in August, and within 24 hours, she became the first creator on the platform to earn $1 million within 24 hours. By the end of that week, she nabbed another million in earnings.

While the move proved to be an instant success for Thorne, it was also not without criticism. At the time, many sex workers who had cultivated a following on the platform and used it as their main source of income worried that Thorne’s high profile entrance would push out smaller creators who post more explicit content.

Connected to that, Thorne originally said that her profile would not include nude images or videos of her; however, soon after creating her account, a screenshot that alleged to show Thorne charging $200 for pay-per-view content of herself naked circulated online.

People who reportedly bought the content then claimed the photo was not, in fact, a nude; rather, they said it only implied nudity and that nothing graphic could be seen. While Thorne denied that she had scammed her subscribers, rumors then swirled that angered customers began asking OnlyFans to refund their purchase.

Around the same time, OnlyFans instituted price caps by limiting how much creators could charge for pay-per-view images and videos, as well as how much they could be paid in tips. The company later denied that move was made specifically in response to Thorne, but nonetheless, that association persisted.

Thorne later apologized for “hurt[ing]” creators on the site, noting that she has tried to remove the stigma from sex work with her career.

Offset Responds To Snoop Dogg’s Criticism of “WAP”: “We Should Uplift Our Women”