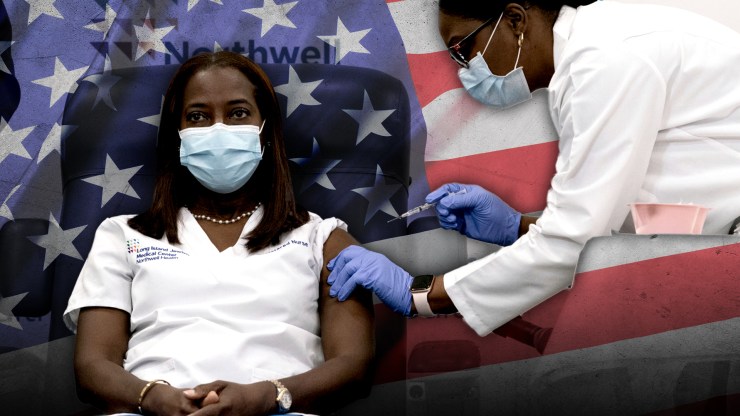 A nurse from New York is believed to be the first American to become vaccinated against the coronavirus outside of scientific trials.

Nurse Sandra Lindsay, who works at Long Island Jewish Medical Center in Queens, New York received the vaccine on Monday during a livestream with Governor Andrew Cuomo. It was administered by Northwell Health Director of Employee Health Services Dr. Michelle Chester. This vaccination marks a historic and hopeful moment for the country, which has lost nearly 300,000 lives to the deadly virus.

“Sandra, you didn’t even flinch,” Cuomo said after Lindsay received the shot. “I take it Dr. Chester has a good touch.”

“She has a good touch and it felt like taking any other vaccine,” Lindsay said.

Lindsay is among the many healthcare workers who have been on the frontlines responding to the pandemic. The hospital she works at is located in one of the New York boroughs hit hardest by the virus when it struck the city in the spring.

“I feel hopeful today, relieved,” she added during the live stream. “I feel like healing is coming. I hope this marks the beginning to the end of a very painful time in our history.”

Both Lindsay and Cuomo encouraged people to continue to wear masks and practice social distancing as the country continues to ride out the worst wave of the pandemic yet. While healthcare workers and those in long-term care are getting priority access, the general public will likely have to wait until the spring or summer until they get their hands on it.

“This is the light at the end of the tunnel, but it’s a long tunnel,” Cuomo said.

President Donald Trump also celebrated the news of the vaccination on Twitter.

The Food and Drug Administration issued authorization for Pfizer and BioNTech’s COVID-19 vaccine on Friday. On Sunday, CDC Director Robert Redfield approved it for administration. The vaccine requires two shots and trials proved it to be 95% effective, marking a milestone medical triumph.

The first coronavirus case was reported less than a year ago, and by comparison, vaccines for other illnesses like mumps and measles took four years and nine years respectively.

The timing of this vaccine could not be any more crucial as the pandemic is worsening throughout the country. There have been a total of 16.3 million infections in the U.S. and nearly 300,000 deaths. Cases are on the rise, and experts believe we are nearing a point where we could see over 3,000 deaths a day consistently—the equivalent of losing more lives than a 9/11 a day.

Vaccinations will begin in several states Monday and continue throughout the week. In addition to New York; Iowa, Kentucky, Connecticut, Washington D.C. and other states and cities have vaccinations scheduled.

Nearly 3 million doses of Pfizer’s vaccine left a plant in Michigan on Sunday headed to all 50 states. Doses will reach 145 vaccination distribution sites Monday, land at another 425 on Tuesday, and then 66 more on Wednesday.

Distribution will be challenging for states as the vaccine needs to be kept in ultra-cold temperatures. States have also said they lack the federal funding needed to administer the shot and track who has and has not gotten it. Still, federal officials say that by the end of 2020, 20 million doses will have been distributed.

Side effects for the vaccine include fatigue, fever, headaches, injection site pain, and joint and muscle pain, which are generally common vaccine side effects which are said to last only a few days. Two nurses who received it in the U.K. did get allergic reactions, but both had histories of allergic reactions and are recovering well. While health officials are looking into this, experts still believe there are very few people who will not be able to safely take this vaccine.

Four people in Pfizer’s trial also developed Bell’s Palsy, but it is not believed that this is related to or caused by the vaccine. Those cases are still being researched and there is still no reason to believe Bell’s Palsy is a side effect of the vaccine.