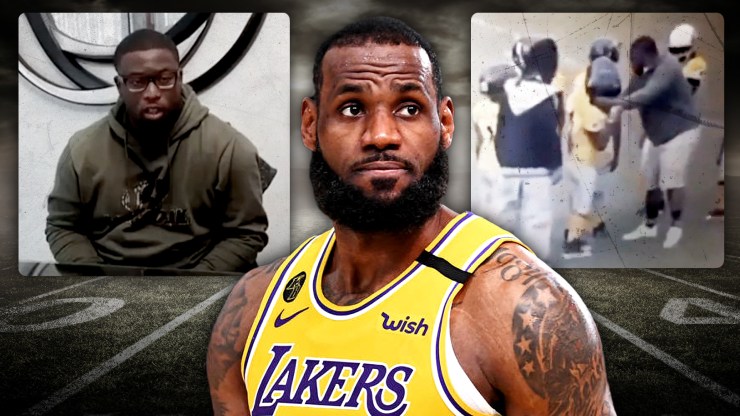 A mother whose child was repeatedly hit by his youth football coach in a now-viral video says she does not want to press charges against the man who struck him, according to the Savannah Morning News.

The video shows the coach, who has since been identified as Gerrel Williams, yelling at the young player before striking him in the face.

He continues to yell and hits the child once more, this time slamming him down onto the ground.

The player picks himself up and endures more screams from his coach. At one point, Willaims even get close to the child’s face, grabs him by the helmet, and sends him off the field.

According to local news reports, the team is called the Savannah Gators, a youth football team for players ages 9 and under. This specific incident, however, happened in Florida while they were playing in the American Youth Football National Championships.

People online were quick to call the coach’s actions disgusting, including major athletes.

Former NFL tight end turned sports analyst Shannon Sharpe said he would have stepped in, whether it was his own child or not.

NBA star LeBron James expressde a similar sentiment on his Instagram story, writing: “Ain’t no way!! Couldn’t be my kid. Hell if I there and it’s not even my kid we gone have more than words for sure.“

As far as what the Team’s organizers have said, there’s a post floating around on social media that was allegedly posted and later deleted from the team’s official Facebook page.

“Please keep the negative comments off this page please this organization has great coaches,” it reads. “We understand what we all saw yesterday was disturbing to us all but let’s not blame everyone for one mans actions”

“The guy in the video is our 9U head coach he is a good guy that just took it a little to far on a 9U player.”

The coach also released an apology video that is stirring up even more outrage.

“I’ma apologize for my actions about what took place, but at the end of the day, I am a man and I’m not gonna make no excuses for what I did. I was wrong,” he said before his statement took a turn.

“I shouldn’t have disciplined him in public, I should’ve waited till we got back for doing what he did. At the end of the day, I apologize to him, the kids, the city down here, and my family back at home. I do apologize. There’s no excuse for my actions.

“He forgave me and his parents have forgiven me, so nobody else should be bashing me,” he added.

His weakass apology. That wasn’t his kid and the parents forgave him? Smh couldn’t be mine. pic.twitter.com/deFKpVTYNP

The Savannah Gators also released a statement saying Williams would be removed from the coaching role, though the message was later taken down and replaced with a new post.

“We don’t allow or condone any of our coaches to hit a child in no way, shape or form with the name Savannah Gators we made a mistake and we will learn from this as we Move forward,” it said.

According to an incident report from the Chatham County Sherrif’s office, the person in charge of the American Youth Football National Championship advised the officer handling the incident that the coach was expelled from the league and was no longer able to attend any more games.

The report also says the player’s mother told authorities she was aware of what happened but did not want to press charges.

She even told the Savannah Morning News she did not want to talk about what happened, but knows “that none of these coaches would harm (the) kids.”

According to the Savannah Morning News, Williams was also employed by the Chatham County Sheriff’s Office as a counselor in its detention center.

As of Thursday, Williams is no longer an employee of the CCSO.

See what others are saying: (The Daily Dot) (Bleacher Report) (Complex)

The U.S. Has Administered Its First Doses of the COVID-19 Vaccine