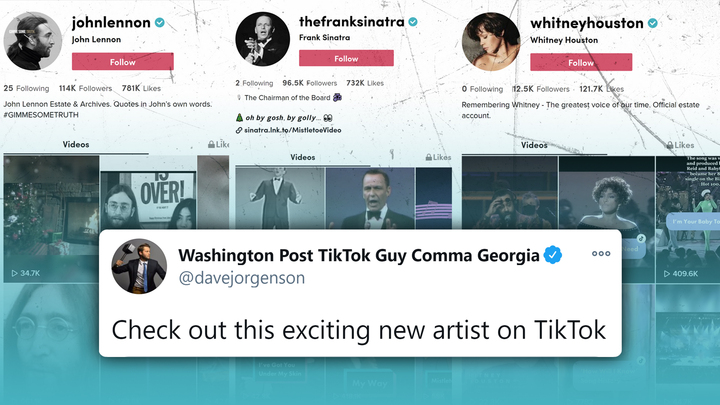 Since TikTok’s rise in use, the video-sharing app has played a huge role in determining what music is popular.

Viral trends on the app have been known to push smaller artists onto the Billboard charts, helping launch the careers of stars like Lil Nas X and Ambjaay, among others.

However, in recent months, music labels have begun trying to help boost interest in their older catalogs of songs.

That might seem a bit odd given that Sinatra has been dead since 1998, but he’s actually not the only deceased music legend on the app.

In fact, there are TikTok accounts for stars like Prince, Whitney Houston, George Michael, and John Lennon. Some were launched earlier this summer, others more recently.

A few have been created by the musician’s estates, however, according to Business Insider reporter Dan Whateley, a lot of these accounts are being launched by the artist’s music labels.

Why Is This Happening?

This seems to be happening so that labels can upload clips of the artist’s songs to be used by others on the app, presumably in hopes that they go viral.

Older songs going viral isn’t something completely out of the realm of possibility. Take Fleetwood Mac, for example.

Their 1977 song “Dream” was singlehandedly pushed back onto the Billboard charts earlier this year thanks to a viral TikTok of a guy just vibing to it on his skateboard while drinking some cran-raspberry juice. That guy, Nathan Apodaca, or 420Doggface208, is now a huge creator in his own right.

His video caused sales of the song to triple, and streams to double. The video even helped the whole “Rumours” album do well again, so perhaps the same could happen for other artists.

In fact, in news somewhat related to this trend, New York Times reporter Taylor Lorenz pointed out that Epic records is paying TikTokers to use old songs “in hopes that a viral sound will lead to a boost in back catalog streaming.”

The effort has already been seen from the entire D’Amelio family. Teen stars Dixie and Charli D’Amelio, for example, posted TikToks jamming out to Michael Jackson’s “Man in the Mirror” with the hashtag “#EpicRecordsPartner.”

Their parents did the same to some other Michael Jackson hits.

It’s not really surprising to see influencers getting paid to promote songs on the app, but it usually happens in relation to newer music.

Now, some hope that these efforts to promote iconic singers will allow a new generation of listeners to appreciate their greatness. That could be huge considering the growing number of young people on the app who can quickly recognize a D’Amelio sister but not Jackson or even any of The Beatles.

See what others are saying: (Tubefilter) (Pedestrian) (Independent)