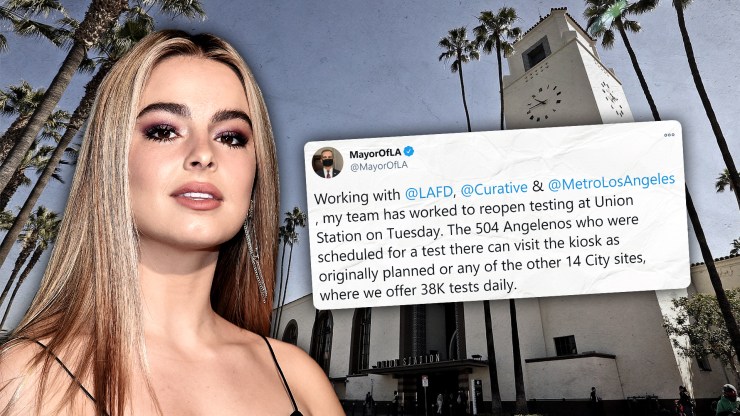 Los Angeles Mayor Eric Garcetti said COVID-19 testing at Union Station would remain open Tuesday, despite a previous and abrupt closure notice that was made to accommodate filming for Miramax’s “She’s All That” reboot.

“The 504 Angelenos who were scheduled for a test there can visit the kiosk as originally planned or any of the other 14 City sites, where we offer 38K tests daily,” Garcetti tweeted just after midnight on Monday,

The announcement came after hours of confusion and backlash from local residents who were scheduled for tests Tuesday. They each received an email Monday afternoon notifying them that their tests had been canceled because Union Station would be closed.

Instead, they were told the city would honor their testing appointments at all of its other testing sites without needing to make a new appointment.

They could also visit Union Station for a test at any time on a different day.

However, as for why the station would be closed, Deadline reported that the decision was made to accommodate a film shoot for “He’s All That,” a film starring faces like Addison Rae and Tanner Buchanan.

That meant a cast and crew of around 170 people would instead occupy the location.

The decision prompted much frustration because while some people could easily go to another testing site, not everyone could. Union Station is actually one of few transit-accessible testing centers. This kind of change would also lead to a back up in scheduled and rescheduled tests over the weekend.

The news also comes at a time when public health should be a top priority as coronavirus cases surge. In fact, the city had just been put under a modified stay at home order that started Monday because of the spike in cases and hospitalizations. According to some experts, rising cases could overwhelm the local healthcare system in less than two weeks.

As the day continued, outlets began reporting that no one from the mayor’s office, Miramax, or FilmLA (the body that approves filming permits) made the decision to cancel testing.

In fact, Miramax and FilmLA said they didn’t even know the station was a testing center, according to Deadline. Instead, the outlet reported that the decision was made by a nationwide testing organization known as Curative.

That group apparently felt it would be too disruptive and difficult to enforce social distancing with both testing and filming happening at the same time, but after seeing backlash over the decision, reps for the film reportedly offered to work with the station to figure out a way to accommodate both.

One source told the Los Angeles Times that the scheduled filming will not take place near the testing kiosks.

Later in the evening, Mayor Garcetti made a statement saying he was hoping to reopen Union Station, prompting more late-night confusion.

By 10 p.m. Monday evening, it was still unclear if the site would be open or closed the following today.

Garcetti finally cleared up question with his announcement that testing would continue without issue. According to several reports, filming will continue as well. However, its unclear right now how many people missed the overnight update and potentially missed their appointments because of all the back and forth.

See what others are saying: (Deadline) (The Hollywood Reporter) (The Los Angeles Times)