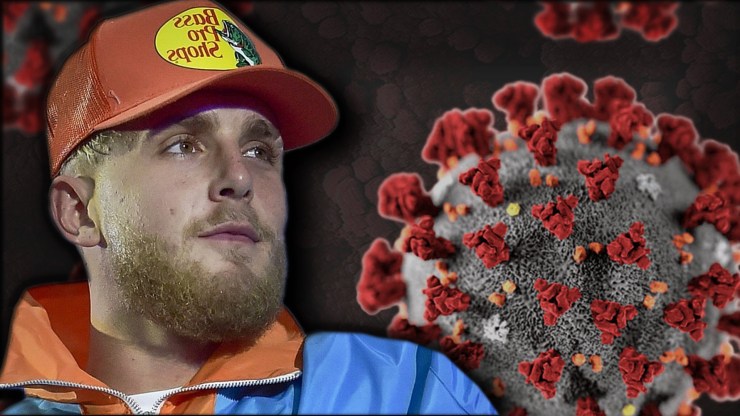 YouTuber Jake Paul is facing major heat online after claiming that COVID-19 is a hoax in an interview with The Daily Beast.

During the interview, the outlet’s Senior Entertainment Editor, Marlow Stern, brought up the fact that Paul has hosted several parties throughout the coronavirus pandemic.

Stern cites a July report from Kat Tenbarge for Insider, which quoted Paul saying at the time, “I personally am not the type of person who’s gonna sit around and not live my life.”

When asked if he still lives by that mindset, Paul essentially explained that he does. “It’s time for us to open up,” he said.

“This is the most detrimental thing to our society. COVID cases are at less than 1 percent, and I think the disease is a hoax,” he added.

Paul went on to compare the virus to the flu, which Stern push back against in an interesting exchange.

Stern: You think the disease is a hoax? It’s killed about 260,000 people so far this year.
Paul: Ugh. Yeah, and so has the flu.
No. The flu has only killed a fraction of that, and we also have a vaccine for the flu.
OK.
The flu kills between 20,000 and 70,000 people a year. And we have a mass-produced vaccine for it.
Don’t we have a vaccine for COVID?
Not yet. They’re hopeful we will soon. It’s been approved by the FDA based on early-stage trials but it hasn’t been introduced to the market yet. So they’re hopeful that there will be a vaccine out very soon, although distribution also poses a big problem. But I want to talk about why you think COVID is a “hoax.”
I don’t have to elaborate.
You don’t want to elaborate on that?
[Deep sigh] No.

This section of the interview caught the most heat online, however, at a later point, Paul made more false and misleading claims about the virus, which Stern again corrected.

Paul also suggested he had doubts about the information coming from health professionals, saying: “I don’t think we do know who the health professionals are. People like yourself, or people who go on Twitter and read articles all day, you know, 98 percent of news is fake, so how do we know what’s actually real, and what we’re actually supposed to do?“

However, the outrage isn’t solely about his coronavirus comments. In the interview, Paul also refused to comment on several of his past controversies, including the FBI raid on his home and his this use of the n-word.

He also faced criticism for remarks he made about his criminal trespassing and unlawful assembly charges. Those charges came after video appeared to show him participating in a looting at a mall in Scottsdale, Arizona during Black Lives Matter protests over the summer.

“It looked like people in your crew were both shooting fireworks at the mall and also destroying some store windows inside of it. Do you feel you conducted yourself appropriately in that situation?” Stern asked.

“I was merely a reporter simply, like you are in this call, wanting to capture, document, and record what was happening,” Paul responded.

At one point, he even became frustrated that Stern was asking him about his past controversies.

“How does asking about these incidents help you learn more about me?” Paul said. “You didn’t ask me, “Yo, do you have any hobbies?” “What are you like as a person?” “What is your daily routine?” “Do you call your mom?” “Do you have friends?”

“You want me to ask you if you have friends or call your mom?” Stern replied.

“I mean, if you actually wanted to learn more about me, yeah, those are the types of questions you would ask,” Paul explained.

To that, Stern noted that he did spend time asking Paul about his passion for boxing and defended his line of questions as fair.

Because of this, and other notable moments in the piece, many are saying the interview gives a good glimpse and Paul’s true character. Readers have also praised Stern for how he conducted the interview and repeatedly corrected Paul’s dangerous claims.

wow! wow! Mr. Stern, I congrats you on how you handled this interview. I could not believe what I was reading and the statements made by Jake. If it was his team setting it up, what in the world were their goals? To show everyone his true idiotic self. wow!