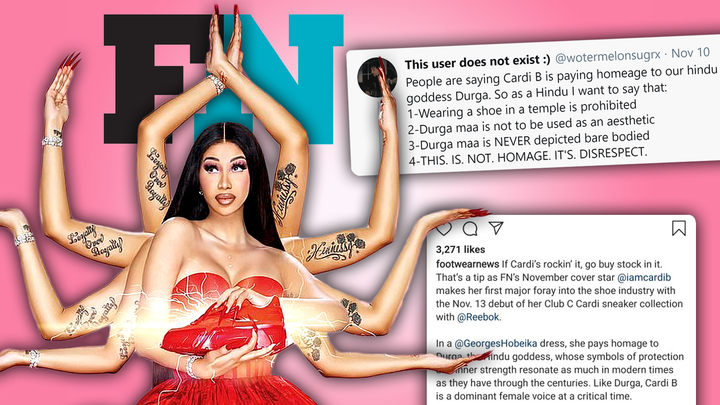 Rapper Cardi B apologized to the Hindu community Tuesday night after backlash over her look on the November cover of Footwear News.

The cover highlighted Cardi B’s new Reebok collaboration, and when promoting the interview online, Footwear News wrote, “In a @GeorgesJobeika dress, she pays homage to Durga , the Hindu goddess, whose symbols of protection and inner strength resonate as much in modern times as they have through the centuries.”

“Like Durga, Cardi B is a dominant female voice at a critical time,” it continued.

Almost immediately, social media users hit back at those claims, calling it offensive and disrespectful.

After seeing these types of responses, Cardi jumped on Instagram to apologize.

“When I did the Reebok shoot, the creatives were telling me, ‘You’re going to represent a goddess,’ that she represents strength, femininity, and liberation,’ and that’s something that I love and that I’m all about and I thought that it was dope,” she explained.

“But if people think I’m offending [their] culture or their religion, I want to say I’m sorry. That was not my intent, I do not like disrespecting nobody’s religion.“

“I wouldn’t like people to offend my religion — when people dress as the Virgin Mary and Jesus, as long as [they’re] doing it in a beautiful, graceful way and respectful way, I don’t feel a certain type of way and I wasn’t trying to be disrespectful.

“Maybe I should’ve done my research and I’m sorry and I can’t change the past but I’m gonna do more research for the future.”

She then went on Instagram Live where she doubled down on her apology but also called for people to stop insulting her while teaching her about her mistake.

“I do gotta do my research. I’m sorry guys. I think people want us to know every word or every religion or everything, and sometimes we just don’t know. But it’s good to learn so I won’t do it again,” she said.

Footwear News quickly responded to the outrage as well, swapping out the photo from the interview.

The magazine again explained that its intention was to pay homage to the goddess, but told People Magazine, “we realize we were not considerate of certain cultural and religious perspectives and how this could be perceived as deeply offensive.“

“We take full accountability for this oversight and we apologize,” it continued.

“It is important we learn from this example and are sensitive to this sort of religious imagery when creative discussions are taking place in the future.”

See what others are saying: (People) (The Hundu) (NME)