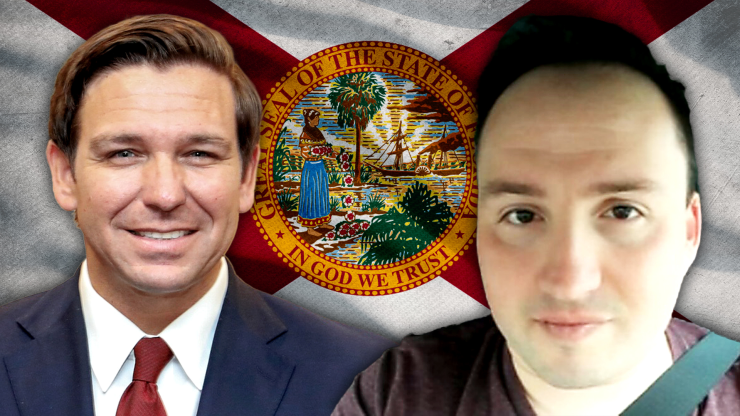 Florida Governor Ron DeSantis has hired an anti-masker and conspiracy theorist to a data analysis role that will likely involve working on COVID-19 data.

The controversial hire is 40-year-old Kyle Lamb, a sports blogger and Uber driver from Ohio. According to the Miami Herald Lamb has touted a variety of unsubstantiated theories, including the idea that masks do not prevent the spread of coronavirus and that lockdowns are ineffective. He also claimed that hydroxychloroquine, a drug boasted by President Donald Trump but denounced by medical experts, can treat the virus. He has also falsely said that the virus is less deadly than the flu, that it is not dangerous for children, and that it might be part of Chinese biowar.

The coronavirus has infected 10.3 million Americans and killed 240,000. According to data from the New York Times, the seven-day average of cases has reached over 123,000, a 69% increase from the average two weeks ago. Nationwide, hospitalizations are on the rise. In Florida alone, hospitalizations have gone up 25% in the past two weeks. The state has seen a total of 182,000 cases and over 17,000 deaths.

The theories Lamb has been touting have been debunked by scientists time and time again and play into the harmful narrative that continues to allow people to deny the severity of the virus. Governor DeSantis is among the many who have downplayed the risks the coronavirus poses.

On a website Lamb made for a COVID-19 podcast he started hosting, he admitted himself that he is not an “expert” when it comes to the disease.

“I have no qualms about being a ‘sports guy’ moonlighting as a Covid-19 analyst,” he wrote in a bio about himself. “Fact is, I’m not an ‘expert.’ I’m not a doctor, epidemiologist, virologist or scientist. I also don’t need to be.”

Those in Lamb’s circle have doubted his qualifications for the position. The Herald spoke to sports writers in Ohio who called him “unhinged,” a “crackpot” and an “amateur, basement epidemiologist.”

The Washington Post spoke Ryan Donnelly, a former coworker who worked a sports publication with Lamb two years ago.

“He is totally unfit for the role and appears to have been hired because he enjoyed posting charts and graphs on Twitter and offering misleading analysis alongside them,” Donnelly told the outlet.

A spokesperson for DeSantis’ office, Fred Piccolo, told the Herald that Lamb’s role is an entry level position and that his work will go through the hands of around ten people before landing on the Governor’s desk. He also said that  the work is not exclusively focused on the virus and that he was not “a COVID-19 hire.”

According to Lamb, though, he will be “doing data analysis on several fronts for them including but not limited to Covid-19 research and other projects.”

Emilio M. Bruna, a professor at the University of Florida tweeted that the thought of Lamb working in this capacity made him start “hyperventilating into my mask.”

Lamb’s Twitter page is filled with charts and commentary aimed at undermining the data provided to the nation by top health experts. While he claims to be providing context to these figures, most of what he alleges contradicts the messaging of medical leaders. He has also written for a conservative blog that claims Florida is over counting their COVID-19 deaths, a claim with no scientific backing.

That blog has been cited by people in the Governor’s office. Piccolo has cited it himself. He said he was not sure who first thought to hire him, but noted his work with data online.

Lamb’s LinkedIn shows that he graduated from the Ohio Center for Broadcasting in 2002 but boasts no other education.

“I don’t know what the governor has this gentleman doing, but I certainly don’t believe that there is anything that is not above board, 100 percent,” Florida Senate President Wilton Simpson told the Herald.