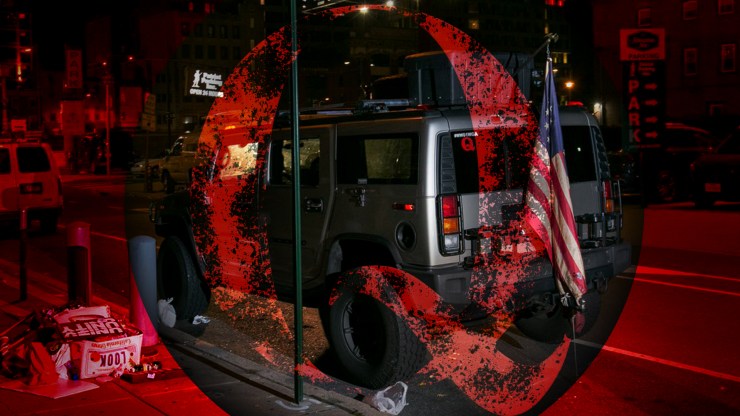 Two armed men were arrested in Philadelphia Thursday while allegedly on their way to the Pennsylvania Convention Center, where ballots in the presidential election are being counted.

In a statement released Friday morning, police announced they received a tip that a silver Hummer carrying people and firearms from Virginia was coming to the convention center, which is acting as Philadelphia’s voting-counting center. At around 10:20 p.m., police found the Hummer parked on the street not far from the building. Stickers associated with Qanon, such as a large “Q” and “#WWG1WGA,” which stands for, “where we go one, we go all,” adorned the Hummer.

In less than ten minutes, bicycle police encountered the two men carrying firearms as they headed towards the convention center and stopped them. Neither were from Pennsylvania nor had valid permits to carry firearms in the state. Both were arrested without incident. Both agreed that the silver Hummer was theirs, and inside the Hummer, police found more guns.

Who, for their part, said in a statement,“The FBI works closely with our federal, state, and local law enforcement partners to identify and stop any potential threats to public safety.”

“It is vital that the FBI, our partners, and the public work together to protect our community. As always, we encourage members of the public to remain vigilant and immediately report any suspicious activity to law enforcement. We have no further information for release and would refer you to the Philadelphia Police Department for any additional guidance at this time.”

Both men have pending firearms charges, although it’s currently unclear what the two men were planning to do at the convention center, which has both Joe Biden and Donald Trump supporters outside. Trump supporters chanted “stop the vote,” while the much larger Biden crowd showed their support for poll workers.

This incident comes amid a legal challenge issued by Trump and his team to stop the vote with baseless claims that there is widespread fraud. On Thursday afternoon, a Pennsylvania state appeals court granted the Trump campaign a legal victory, albeit a small one, by allowing Republicans poll watchers to observe ballot counting while wearing masks and just 6-feet away. However, this decision is unlikely to affect any vote counting, as observers cannot challenge the validity of a ballot.

Philadelphia is likely to be a significant factor in how Pennsylvania votes, as it’s the largest population center in the state. Early indications point to voters there leaning towards Biden, which has helped the candidate close the gap in the state. The Associated Press currently shows that Biden has pulled ahead slightly in the state, although there are still many ballots to be counted, and it could swing either way.

If Biden secures Pennsylvania’s 20 electoral votes, then he’s all but assured to win the Presidency. It’s not expected that the nation will know who won the Presidency until multiple legal challenges are resolved and widely anticipated recounts are completed across the various states with extremely close races.

Related Topics:2020 ElectionBidenFeaturedFirearmfirearmsLawsuitPhiladelphiaQAnontrump
Up Next

How the World is Reacting to the Biden-Harris U.S. Election Victory