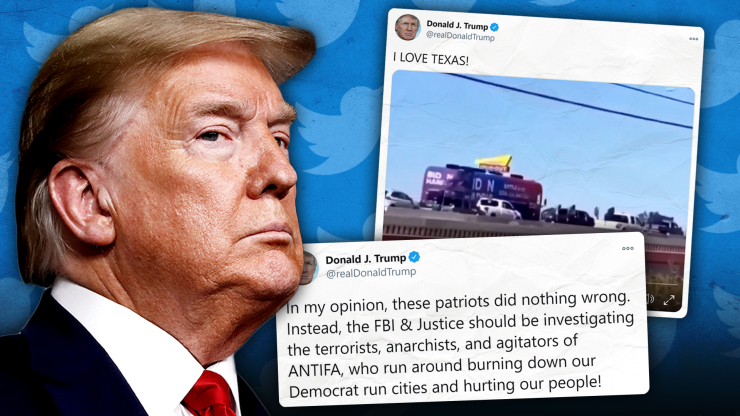 President Donald Trump is defending his supporters who formed a convoy around a Biden campaign tour bus in Texas on Friday. In a Twitter post on Sunday, he called those supporters “patriots” and criticized the FBI for launching an investigation into the stunt.

“In my opinion, these patriots did nothing wrong,” the president wrote. “Instead, the FBI & Justice should be investigating the terrorists, anarchists, and agitators of ANTIFA, who run around burning down our Democrat run cities and hurting our people!”

As the situation began to unfold Friday afternoon, some supporters in the caravan promoted the stunt on social media, with many dubbing it the “Trump train.”

“Trolling is FUN!!” one post reads. “Join us in #SanAntonio to escort the Biden Bus coming through San Antonio. We are on the bridges & will intercept at Walters/I35!!”

In a subsequent video, a number of vehicles can be seen surrounding that bus, many of them sporting Trump campaign flags. According to a campaigner who spoke to people on the bus, those Trump supporters began honking their horns and shouting,

The Biden campaign has also claimed that multiple trucks pulled in front of the bus and tried to slow it down.

In another video, a woman in that convoy calls the stunt “hilarious” and says that it is running the tour bus out of Texas. Moments later, she expresses pure shock when she sees an SUV and a truck directly behind the tour bus colliding into each other briefly.

Neither of those vehicles reportedly pulled over, and it is still unknown what prompted them to run into each other; however, it has since been confirmed that the SUV was a staff member vehicle with the Biden campaign.

What are Trump and Biden Saying?

“Rather than engage in productive conversation about the drastically different visions that Joe Biden and Donald Trump have for our country,” he said, “Trump supporters in Texas [Friday] instead decided to put our staff, surrogates, supporters, and others in harm’s way.”

According to The Texas Tribune, Texas GOP Chairman Allen West was dismissive of the incident.

“It is more fake news and propaganda,” he said. “Prepare to lose… stop bothering me.”

Naomi Narvaiz, another Texas GOP official, told the Tribune, “We decided we would jump on 35 to show support for our president. I didn’t see anyone being overly aggressive.”

“We sent the @JoeBiden @KamalaHarris bus out of Hays [County]!” Narvaiz said on Twitter. “Your kind aren’t welcome here!”

On Saturday, Trump endorsed the “Trump train,” saying on Twitter: “I LOVE TEXAS!”

On Sunday, he also spun the story a much different way in front of his supporters while at a campaign rally.

“Did you see the way our people, they were, ya know, protecting this bus… because they’re nice. They had hundreds of cars. Trump! Trump! Trump and the American flag,” he said.

To be clear, there is no evidence that this convoy was aiming to protect the Biden bus. In fact, many of those supporters have outright claimed themselves that they were trying to run this bus out of town.

As far as the collision from that incident goes, Hays County Sheriff Gary Cutler, a Republican up for re-election this year, said that the Biden campaign failed to notify his office it would be passing through the county. Because of that, Cutler said law enforcement was not prepared for any possible confrontations,

“The planning of this was questionable,” he said of the Biden campaign.

Cutler’s response has drawn wider criticism, especially as Democratic officials argue that the “Trump train” was the one creating a dangerous situation.

No police or sheriff’s departments in the area has filed any traffic violation citations; however, as of Saturday, the FBI now says it’s investigating the collision, but so far, no other details have been released.

See what others are saying: (The Texas Tribune) (The New York Post) (USA Today)

Election Day Is Tomorrow. Here’s What You Need To Know