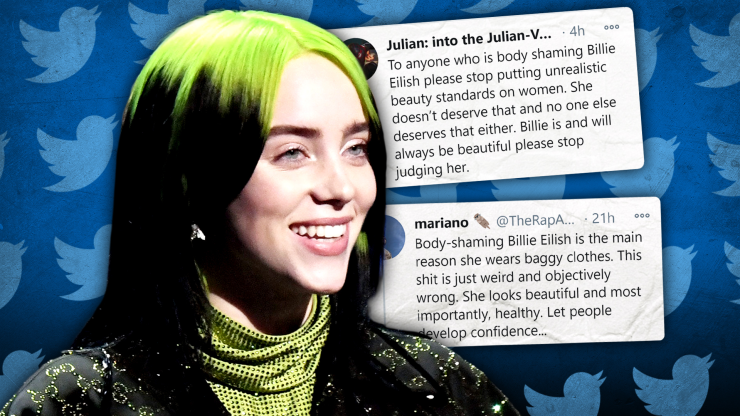 Billie Eilish fans are calling out body shamers who made comments about the singer after she was photographed wearing non-baggy clothing.

Eilish was essentially wearing the unofficial outfit of quarantine, a fitted tan tank top and comfy jogger shorts, while out and about in Los Angeles on Sunday.

While most people get away with wearing something like that every day, the young Grammy winner was met with a tabloid frenzy. Eilish has become known for wearing baggy clothes and has even said she wears looser outfits intentionally to prevent people from making unprovoked comments about her body.

Photos of her in the relaxed attire went viral and made headlines, with gossip magazines quick to gawk at the pictures. Body shamers soon followed with their remarks. One Twitter user said she had a “mid-30s wine mom body.”

Elish’s fans quickly ran to her defense, slamming those who body shamed the 18-year-old.

“There is nothing greater in this world than billie eilish being confident in her body,” one Twitter user wrote.

“To anyone who is body shaming Billie Eilish please stop putting unrealistic beauty standards on women,” another fan said. “She doesn’t deserve that and no one else deserves that either.”

Many also pointed out the fact that offensive and uncalled for comments like that are what stop the young singer from usually wearing fitted clothing.

Others called out tabloids for making a big story out of her wearing a normal casual outfit to begin with.

Eilish eventually issued an indirect response on her Instagram Story Tuesday night by sharing a TikTok from influencer Chizi Duru.

“Y’all gotta start normalizing real bodies, okay. Not everyone has a wagon behind them, okay,” Duru says in the video. “Guts are normal. They’re normal. Boobs sag, especially after breastfeeding. Instagram isn’t real.”

Eilish also posted a video of her walking past her Grammy awards, which many thought was a subtle clapback to body shamers.

This is not the first time she has addressed body shaming and other remarks made around her appearance and wardrobe. During some of her concerts, Eilish has played a short video where she recites a spoken word poem about her experiences with her body image and the media.

“The body I was born with is it not what you wanted? If I wear what is comfortable I am not a woman,” she continues. “If I shed the layers I’m a slut. Though you’ve never seen my body, you still judge it and judge me for it. Why?”

Some also shared this video as a reminder that body-shaming Eilish or anyone else is not okay. Her fans specifically pointed out that Eilish has been dealing with these kinds of issues for a long time and should not be subject to these repeated attacks.

See what others are saying: (Cosmopolitan) (Uproxx) (Glamour)